Today we're launching David A. Robertson's The Barren Grounds, the first instalment in an an epic middle grade fantasy series  where Narnia meets traditional Indigenous stories of the sky and constellations.

The book is being championed by Susin Nielsen, who tells us, "David A. Robertson has written such a fine, beautiful novel. He manages to combine hard truths about our history with a Narnia-like fantasy, sweeping us into the world of the story while opening our hearts as well." 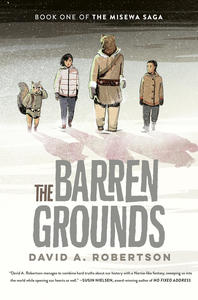 David A. Robertson: It was a difficult task to draw inspiration from a classic book, incorporate traditional Cree stories of the sky, address the foster care system and its treatment of Indigenous children and family, talk about land protection—all at once. The integration of all this, seamlessly, into a story that is engaging, entertaining, and exciting, is something that I’m proud of. Something I’d add is I’m also proud of having two Cree protagonists who are written from a place of truth, who have agency, who children can see themselves reflected in, truthfully represented.

49th Shelf: Tell us about your ideal reader, and where you imagine them reading your book.

DAR: This is a book for everybody, because there is something that can be taken from the book for any reader. There is value for Indigenous children to see themselves reflected in Morgan and Eli, and to see how important connection to culture and land is. There is value for non-Indigenous children to see Cree characters that are heroes that are truthfully written and represented. It starts to break down stereotypes that have long been, and in many ways still are, perpetuated through popular culture. There are messages that all readers need to hear, including ones about land protection and the environment, and colonial systems like the foster care system. I love to picture a kid in the park, lying on the grass with their feet up, flipping through the pages and not noticing time go by.

I love to picture a kid in the park, lying on the grass with their feet up, flipping through the pages and not noticing time go by.

DAR: An obvious inspiration is C.S. Lewis and The Chronicles of Narnia. Recently, I’ve wanted to challenge myself to reframe classical literature within an Indigenous lens. I found parallels between Narnia and Cree legends of the sky. The Ochek story, which is about the creation of what western society calls The Big Dipper, starts in an eternal winter, just like The Lion, the Witch and the Wardrobe. The journey is to find the summer birds, which were stolen by a human, in order to bring warmth back to the North Country. A story that I read when I was a young called Tom’s Midnight Garden [by Philippa Pearce] inspired me as well, in particular for Book 2 in the series, which is coming out in 2021. I think there’s an old-school feel to this story, as much as the messages it has are relevant today.

49th Shelf: What’s something you know now that you didn’t know when you set out to write your book?

DAR: In the incorporation of Swampy Cree within the story, and its strong connection to culture for both Eli and Morgan, I learned a lot of words that I’d not learned before. In that way, the reality that language fosters a stronger connection to culture played out in my own life while working on this book, as well as the upcoming sequels. It’s made me want to pursue the language more than I have at any time before. And get out onto the land more often, as well. The two, I think, go hand in hand.

49th Shelf: Have you planned out the entire Misewa Saga? What’s next in the journey?

DAR: I have the Cree legends that I’m going to use for the next two books, and I’ve already written Book 2. I have an outline for Book 3 in my head, and I’m going to start writing it soon. The whole idea is to make the world on the other side of the portal, Askī, bigger and bigger, and that the stakes get higher and higher for Morgan and Eli. There’s time travel, there’s monsters, there’s stolen spirits, there’s more portals, there’s loss, and there’s love. It’s so much to pack into three books, but I’m excited to take on that challenge and make The Misewa Saga everything I hoped it would be when I dreamt it up a few years ago.

DAR: Honestly, seeing your book on the shelf of any bookstore is such an exciting feeling. It’s what I always dreamed about as a kid, and when I happen upon a book of mine for sale in a real, live bookstore, it’s a realization of that dream. I feel like it’s such a privilege that I, and other writers, have, and in that platform, I think it’s important to say something meaningful to people. The Barren Grounds does that, and I love imagining a kid looking through the shelves of a bookstore, seeing the beautiful cover (by Natasha Donovan) and asking their parent if they can buy it.

DAR: Well, I had a lot of support. The people at Puffin Canada were amazing in giving me this opportunity, and helping to make this book the best it could be. But I suppose I’m most grateful for my kids, because they inspire me to write stories for kids that matter, and that they can feel empowered by, and see themselves in. It’s the biggest inspiration I have.

"David A. Robertson ...manages to combine hard truths about our history with a Narnia-like fantasy, sweeping us into the world of the story while opening our hearts as well."

Learn more about The Barren Grounds:

Morgan and Eli, two Indigenous children forced away from their families and communities, are brought together in a foster home in Winnipeg, Manitoba. They each feel disconnected, from their culture and each other, and struggle to fit in at school and at their new home—until they find a secret place, walled off in an unfinished attic bedroom. A portal opens to another reality, Askí, bringing them onto frozen, barren grounds, where they meet Ochek (Fisher). The only hunter supporting his starving community, Misewa, Ochek welcomes the human children, teaching them traditional ways to survive. But as the need for food becomes desperate, they embark on a dangerous mission. Accompanied by Arik, a sassy Squirrel they catch stealing from the trapline, they try to save Misewa before the icy grip of winter freezes everything—including them.

The Misewa Saga, Book One

Morgan and Eli, two Indigenous children forced away from their families and communities, are brought together in a foster home in Winnipeg, Manitoba. They each feel disconnected, from their cultu …