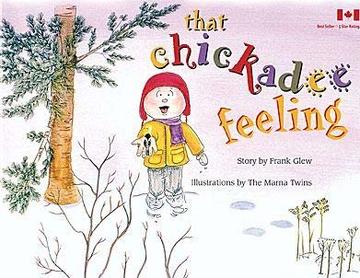 Once when I was young, on a family hike through the ravine, I spotted a man in the bushes with his arms out, a flurry of grey and white, black-capped birds fluttering round him. He put his finger to his lips as we approached. We stopped dead in our tracks, watching the chickadees swoop from nearby branches to peck at seed in the crown of his hat and upturned palms.

I remembered this magical moment when I read That Chickadee Feeling, by Frank Glew, illustrated by the Marna Twins. It begins with a kid who’s really, really bored, so their mom invites them on an outing with some seed and advice to be patient. When a bird lands on the child’s hand, the kid experiences “that chickadee feeling.” It’s the same feeling that comes from riding a bike for the first time, or winning a race (or encountering the Chickadee man in the forest). This tale challenges the reader to find a way out of boredom, with birding as a definite option. 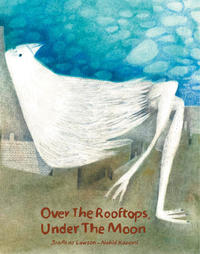 Over the Rooftops, Under the Moon, by JonArno Lawson, illustrated by Nahid Kazemi, follows a bird as he flies through the world, sometimes with others, sometimes alone, through fall, then winter, across various landscapes, both strange and familiar. This book too is about finding inspiration: “…suddenly you feel something that gets you moving and wondering…” 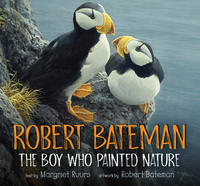 If any book can inspire birdwatching, it is Robert Bateman: The Boy Who Painted Nature, by Margriet Ruurs, with art by Robert Bateman. The end-papers of this picture book biography show sketches of birds, including a dark shadow where “a seagull barfed on his sketchbook.” The book includes some astoundingly detailed sketches drawn by Bateman at age 12. This is the story of someone who pays attention, punctuated with paintings and photos of the artist in various locations, i.e. sitting with penguins in the Antarctica. Amidst the foliage and animals, birds remain a constant; the story ends with Bateman teaching his grandchildren to draw (you guessed it) birds. There’s more of a detailed biography at the back. 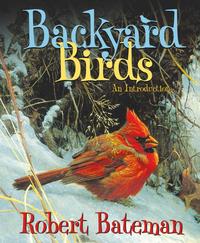 Backyard Birds, by Robert Bateman, illustrated by Ian Coutts, could act as a simple field guide for kids. Following an intro by the author, the book is laid out in related pairs i.e. mallard ducks with Canada geese. Alongside detailed illustrations of birds, the text describes identifying characteristics and interesting facts and habits. For example, the mourning dove’s wings whistle as it flies; crows drop nuts under wheels of moving cars and wait for them to be shelled. There’s also general information about bird senses, life cycles, migration and how to attract birds in your backyard. 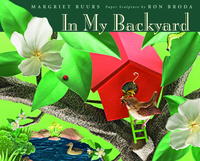 Another picture book by Margriet Ruurs, In My Backyard, includes minimal text and Ron Broda’s beautiful paper sculptures illustrating a host of backyard creatures. Three of these are birds—the wren, hummingbird and swallow. At the end Ruurs gives a paragraph of interesting facts about each creature, including a rumour that the hummingbird’s opposite rotating wings inspired the invention of the helicopter. In her epilogue, Ruurs also invites readers to hunt for other animals in the book. 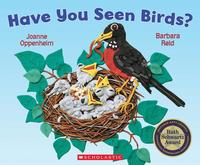 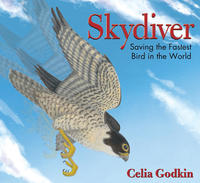 Skydiver: Saving the Fastest Bird in the World, by Celia Godkin, is a nonfiction picture book. This tale follows a peregrine falcon as she meets her mate, makes a nest on a rocky ledge, and ends up crushing her clutch of eggs—because the spraying of DDT makes the shells thin. DDT also endangers insect-eating birds, and those birds that eat insect-eating birds, such as the peregrine. After the DDT ban, bird lovers work to revive the population by keeping some in sanctuaries, feeding hatchlings away from human contact, and releasing them in the wild. The book ends with two peregrines making their home on skyscraper ledges. 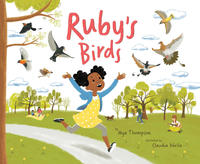 Ruby’s Birds, by Mya Thompson, illustrated by Claudia Davila, has a full-circle ending. Ruby loves to sing, so when her downstairs neighbour, Eva, takes her to Central Park to bird-watch, she finds it hard at first to be silent. Eva points out a Golden-winged warbler, pausing on its journey home to Costa Rica, and teaches Ruby to pay attention. Birds soon find their way into Ruby’s life, and illustrator Davila captures a lovely nighttime scene of her dreaming of feathered creatures. Ruby then takes her family on a warbler-hunt in the park, teaching them to be still as statues. 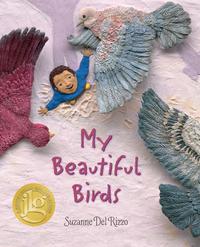 My Beautiful Birds, by Suzanne Del Rizzo, is about birds as symbols of hope. Sami and his family trek from Syria to a refugee camp. He misses his rooftop pigeons from home, afraid they haven’t escaped as he has. Sami tries to paint his birds but they appear dark and forboding like the war—but then colourful plumes of new birds he discovers bring hope. Sami feeds them, helps them build a nest, and in return, they help him transition to his new life. Del Rizzo’s modelling clay images are painterly and might inspire young artists to create bird pictures of their own.

Over the Rooftops, Under the Moon

What happens when a bird doesn’t feel like a bird?

Celebrated artist Robert Bateman is renowned internationally for bringing the natural “world to life on the canvas. A naturalist and painter from his youth, Robert has for decades used his recognition to shed light on environmental issues and advocate for animal welfare.
Robert Bateman: The Boy Who Painted Nature is the story of how a young chil …

Robert Bateman's unique talents as an artist, naturalist and storyteller make him the ideal guide to the world of birding. His marvelous paintings and accessible text introduce children to the wonder of familiar birds. Beautifully crafted sections include special features on identifying, feeding and finding backyard birds. Key facts about the diffe …

From the singing of little wrens in spring to paper wasps building their nests in summer; from baby bats drinking mother’s milk in fall to baby possums climbing into mother’s pouch in winter, In My Backyard celebrates nature and backyard animals through the seasons. Wildlife artist Ron Broda’s detailed paper-sculpture art beautifully compleme …

From the singing of little wrens in spring to paper wasps building their nests in summer; from baby bats drinking mother’s milk in fall to baby possums climbing into mother’s pouch in winter, In My Backyard celebrates nature and backyard animals through the seasons. Wildlife artist Ron Broda’s detailed paper-sculpture art beautifully compleme …

Have You Seen Birds?

A band, a flight, a flock of birds – the world is full of lots of birds!

Spring, summer, autumn and winter birds; woodland, meadow, sea and marsh birds — all are brought to life in lively, lyrical prose and rich Plasticine illustration. Colour and movement abound in every word and every detail, making each bird memorable.

A timely reissue, of a …

Saving the Fastest Bird in the World

The story of a peregrine falcon and its mate's struggle to raise their young is told against the backdrop of scientists' efforts to understand the raptors' decline in the wild. After a devastating effect on the bird's lifecycle is linked to the pesticide DDT, the world's fastest bird must depend on humans to recover and thrive once more.

Meet Ruby, a plucky young girl who uncovers the wild side of her city neighborhood with the help of a grown-up friend. When Ruby realizes there are amazing birds right in her neighborhood, her imagination takes flight. Birders have a name for the moment they get hooked—they call it their spark moment. This is the story of Ruby’s spark moment, i …

Behind Sami, the Syrian skyline is full of smoke. The boy follows his family and all his neighbours in a long line, as they trudge through the sands and hills to escape the bombs that have destroyed their homes. But all Sami can think of is his pet pigeons - will they escape too? When they reach a refugee camp and are safe at last, everyone settles …