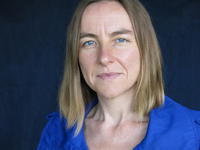 Swimmers in Winter (Invisible Publishing) is Faye Guenther’s debut collection of short fiction. These six stories explore the lives of queer women across through time. Among other issues, the works consider conflicts between queer people and the police; the impact of homophobia, bullying, and PTSD; the dynamics of women’s friendships; and life for queer women in Toronto during WWII.

Thea Lim, author of An Ocean of Minutes, says “Faye Guenther lovingly tells the stories of ordinary women, whose lives have yet been mostly ignored by literature. Each character in this collection is a planet unto herself: the stories part the mists and show the miles to the surface. Dizzying, precise, and beautiful.”

Faye Guenther lives in Toronto. Her writing has appeared in literary magazines including Joyland and she has published a chapbook, Flood Lands, with Junction Books. Swimmers in Winter is her first collection of short fiction.

**
Trevor Corkum: The title story “Swimmers in Winter” takes place partly in the back room of a lesbian bar in 1950s Toronto. It’s a powerful exploration of time and place. What did you learn about this period in Toronto’s queer history during your research?

Faye Guenther: When I wrote this story, I was interested in exploring what life was like for “downtowners,” a subculture of diverse queer women who lived, worked, and socialized in downtown Toronto in the 1940s, 1950s, and 1960s.  It was a subculture that formed as many women moved to the city during World War Two for the new factory jobs with livable wages that were suddenly available to them.  In her essay, “Rethinking Class in Lesbian Bar Culture: Living 'The Gay Life' in Toronto, 1955–1965,” Elise Chenier describes downtowners as “a distinct social group of sexual outsiders” who were “more assertive in staking their claim on physical and social spaces."

After World War II was over, downtowners lost the factory jobs they had, and it was harder to find other work in Toronto. They faced discrimination because they were unwilling or unable to hide their sexuality or restrict their gender expression. For Black women, Indigenous women, and women of colour, this discrimination included racism.
To support themselves, Chenier explains how downtowners used “concrete survival strategies…carved out from the street and underground economy,” including criminalized activities, “all of which occurred in and around the public spaces they themselves secured."  The Continental Hotel on the corner of Dundas and Elizabeth street, and the surrounding neighbourhood and communities, were at the centre of the action for a while.

I wanted to imagine what it might have been like to be a downtowner. That’s how the characters of Florence and then Magda took shape in the first two stories in the collection.

TC: Even though the collection is called Swimmers in Winter, running features prominently in the book, both literally and metaphorically. Characters run laps to forget, they run away from their pasts, they flee from their lovers, their fears, their jobs. Can you talk about this aspect of escape a little more, and why it’s especially relevant to queer folks?

FG:There’s a lot of running in the collection. I wouldn’t characterize all of it as escape though.

Sometimes the characters are trying to protect themselves by running, to get away from the excessive use of force, and of violence, by police. Other times, they’re trying to outrun the pain they find themselves in, which is often shaped by the varied experiences of marginalization that queer people face.

But the characters can’t afford to, or aren’t able to, run away from the areas of their lives you mentioned: their pasts, their lovers, their fears, their jobs. For example, they need their jobs in order to eat and keep a roof over their heads, and they can’t escape their past even as they can’t go back to change it if they wanted to. So instead of running away, they’re running around these areas of their life, or through them, or beside them, in order to keep going.

But the characters can’t afford to, or aren’t able to, run away from the areas of their lives you mentioned: their pasts, their lovers, their fears, their jobs.

They’re also chasing something too: a future, a dream, a different kind of reality, especially when the present feels hard to bear. Running for these characters is about connecting, physically, and maybe only temporarily, with a sense of their own volition, a sense of agency and momentum. I like to write characters in action. Having characters do something physical can be a powerful way to tell a story.

TC: “Things to Remember” features the parallel narratives of lovers Eva and Claudia, who both also reappear in a further story. It’s a story of ghosts and abandonment. How did these their stories arrive for you and did you consciously plan to write multiple stories with the same characters?

FG: In “Things to Remember”, the third story in the collection, the two main characters, Eva and Claudia, meet while working in the kitchen of a diner in the late eighties. It’s an early relationship of first love, which might be familiar to many readers, with its intensity and tenderness and tension. An atmosphere of precarity surrounds Eva and Claudia, and that precarity comes from being young, and queer, and poor. They have to survive without a safety net, and they’re aware of this. They become each other’s shelter, insofar as love is a kind of shelter—though that shelter doesn’t last for them.

They have to survive without a safety net, and they’re aware of this. They become each other’s shelter, insofar as love is a kind of shelter—though that shelter doesn’t last for them.

Both Claudia and Eva do reappear in the next story, “Captive Spaces,” set in the nineties. The six stories in the collection are linked in pairs by reoccurring characters. From one story to the next there is a leap forward in time. In each pair, the story that takes place in a more recent time is also framed by the other story set further in the past. The characters are living in the wake of events and relationships that occurred in the past.

I didn’t plan to link the stories like this when I started writing them, but I soon realized I needed something to give the collection a structure, a kind of cohesion. It also made sense to me that characters would reappear, usually in the form of memories, given what temporal reality is like in our interior lives, where we move in our hearts and our minds, back and forth, and sometimes in circles, between past and present and an imagined future.

TC: Several of the stories involve characters dealing with PTSD. In “Opened Fire,” Carmen has returned home early from the war in Afghanistan after experiencing several traumatic events. What was it like to tell the story of a returning veteran and how did you approach the story?

FG: Though there are many stories of soldiers returning home from war and trying to live in the aftermath of the violence and conflict they’ve witnessed and engaged in, very few of these stories feature soldiers who are women. The question of why is interesting to me.
The same year I read The Things They Carried (1990), by Tim O’Brien, for the first time, I also watched a documentary called Hell and Back Again (2011), directed by Danfung Dennis. The struggles and the situations of the men portrayed in these two stories made a strong impression on me and I wanted to explore them as a writer. That’s what led me to imagine the main character, Carmen, in the fifth story in the collection, “Opened Fire.”

Courage often gets idealized, especially in situations of conflict. I wanted to write a different kind of story about what it means to be courageous, and also what it feels like, viscerally, because I think this could offer new ways of looking more closely at what courage is.

TC: Finally, what queer Canadian writers have inspired you most, either as a writer or reader? Any books to recommend to readers for Pride month?

I also encourage readers to ask your local independent bookshop for recommendations of books by queer Canadian writers, and then buy those books from them if you’re able to. As much as we need LGBTQ+ stories to be published, we also need the physical spaces in our cities and towns where we can find these stories and read and listen to them together.

In Toronto, I can think of:

If you’re reading this interview, and you know of an independently run shop in your city or town that features and sells queer books, and hosts events for queer authors, maybe you’ll let 49th Shelf know on Twitter or FB, and they'll add to my list here.
**
Excerpt: “Swimmers in Winter” from Swimmers in Winter, by Faye Guenther (Invisible Publishing)

I can’t read Lucille’s smile. I know her name, and that’s all. We only met a moment ago, in a back room so dark you have to look twice to tell anything. She stepped out of the shadows into the copper light pooling around the bar and ordered another drink. Her face and hair streaked gritty with illumination. She leaned there and waited, inside the music, breathing in the perfume and smoke and the deeper scents of the strangers all around, watching for who was looking.

Moving toward her meant being willing to fall first. Around us, the room is a small ocean of girls, rough, beautiful. It’s long after midnight, and Lucille and I stand side by side, a sliver of space between us. We watch the dance floor, drinking hard, while girls hook and pushers work the sidelines. Women’s voices slap and swing their laughter up against music from the record player looked after by Elegant Ivan, the bartender, who knows most of the patrons by first name. In the centre, they’re dancing so close.

I drink deep and gesture to Lucille with my hands. Words spill away from me and I scramble to catch them, raising my voice, to hold her attention through the clamor, the catcalls, the sweet murmurs.

I tell her I’m Florence and that I do a little bit of everything. They call me a downtowner, because deep in the city is where I’m at home, living in a ramshackle building with a hole in the roof that lets in the birds.

“That sounds familiar,” Lucille answers, laughing low and calm, a little resigned. Brushing her dark hair away from her round face, she sways a little on her feet, as if the music has caught her at the waist. She glances past me at the endless action. The top button of her blouse has come off, leaving behind a few loose black threads and a soft window of bare skin below her neck that grows wider as she moves.

Published with permission of Invisible Publishing