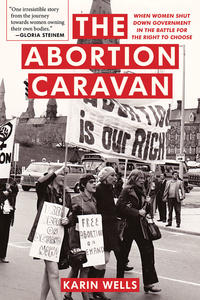 The Abortion Caravan, intent on bearding prime minister Pierre Trudeau in his den and removing abortion from the Criminal Code, set off for Vancouver on April 27, 1970. There were 17 women crammed into three vehicles—a great big Pontiac Parisienne convertible, a pickup truck and a Volkswagen van. On top of the van was a big black home made coffin.

Learn more in this excerpt from Karin Wells' celebrated new book The Abortion Caravan: When Women Shut Down Government in the Battle for the Right to Choose, out now.

That coffin was featured in every newspaper story as they went across the country. It became the symbol of the Caravan and epitomized their primary argument: as long as clean, safe, medically supervised, legal abortions were unavailable—or after the 1969 reforms, barely available—women had to resort to backstreet abortionists. That meant unsanitary conditions and abortionists who hardly knew what they were doing and were not going to stick around to make sure that things turned out well. It meant risk and too many deaths.

Women who could not find or could not afford any sort of abortion provider were aborting themselves. They were flushing themselves out with Lysol or Drano, inserting knitting needles or wire coat hangers into their bodies, drinking quinine or Epsom salts. And when one remedy didn’t work alone, they would try a combination. Women were dying. Somewhere between a thousand and two thousand a year in Canada. In the US, it was estimated that there were 12,000 deaths a year. The coffin summed up the argument in one very potent symbol. It went with them across the country, to every rally, to Parliament Hill—it even rested, briefly, on Pierre Trudeau’s porch. On the day the Caravan left Vancouver, the coffin proved itself not only symbolic but useful. It became a very handy place to store their sleeping bags.

“It was hearing about all the women and the botched abortions. It was the intensity and secrecy of it. The issue was important, but it was also introducing the women’s movement. We were interested in women’s liberation, in equality, and in changing society. Period. We were brazen and organized and very determined. Thinking about it now it’s amazing.”

Nor did they really know each other—some had never met before that morning. Colette Malo, the woman (as far as anyone knows, the only woman) who kept a journal throughout the Caravan had flown in from Halifax a couple of days earlier. “I was like the new kid and I didn’t have any status. I didn’t have a big role and I was never one of the speakers. I just tagged along. No problem. Come on with us."

Mary Matheson was there because her childhood friend Marcy Cohen invited her.  For others it began as a bit of a lark. Margo Dunn from Montreal was a graduate student in English at Simon Fraser University and, unapologetically, joined the Caravan on a whim. “I did not plan my life back then,” she said. Then there was the woman with a guitar—there was always someone with a guitar. She came for the adventure, so did the poet Gwen Hauser.  No one knew quite how or why Gwen Hauser joined the Caravan, but she did. There was Betsy Meadley and the woman who became her ally, Mary Trew, a member of the Young Socialist Alliance, the Trotskyists. And there were the politically motivated women: Ellen Woodsworth, Dawn Carrell, and Marcy Cohen.

They gathered mid-morning on that Monday at the Vancouver Courthouse, there were balloons and banners and songs. A dog ran around barking. The supporters and the curious filled the courthouse steps and climbed onto the big stone lions.

Banners were fluttering in the breeze from Betsy Meadley’s convertible—“Abortion on Demand,” they said. The women in the Caucus who were staying in Vancouver came to see them off. They had even enticed eighty-three-year-old Mary Norton to make an appearance. Norton was a socialist suffragette who had been active in BC ’s first wave of feminism before World War I.

Then came Mary Trew’s speech, their statement of purpose for the press. Mary stood front and centre, her wispy blonde hair blowing in the wind, with a megaphone in her hand:

The megaphone made her sound shrill and a little nasal, but her voice could be heard across the courthouse lawn.

“ …And to make free abortions available to women.”

There was applause and more singing. Trew scuttled across the courthouse lawn and found her place in Charlotte Bedard’s truck.

Looking back, they seemed so unprepared. There were Caravan women who had never been outside BC. Not many of them knew how to drive. Very few knew the names of the women on whom they would rely to organize the rallies and find places for them to sleep on their way across the country. They knew they were going to Ottawa but they did not know how to get there, or what they were going to do when they arrived.  As Ellen Woodsworth put it, “We knew we were transforming something, but we had no idea what was going to happen once we reached Ottawa.”

Cathy Walker pulled the Volkswagen van with the coffin on top out on to Georgia Street and turned right, heading east. Betsy Meadley was next, smiling at the crowd with one hand on the wheel of the car. The top of the convertible was  still down, and Marcy Cohen and three other women were perched on the back of the seats waving like so many beauty queens. Last came the pickup truck, music blaring from the big loudspeakers with Charlotte Bedard at the wheel. The loudspeakers jutted out on either side beyond the width of the truck, and Charlotte was frantically adjusting the side mirrors as she tried to keep up with Betsy. Charlotte couldn’t see a thing behind her. “I was pulling out onto Georgia, totally blind. I held my breath and prayed.”

Excerpted from The Abortion Caravan:  When women shut down government in the battle for the right to choose, by Karin Wells © 2020 Published by Second Story Press.

In the spring of 1970, seventeen women set out from Vancouver in a big yellow convertible, a Volkswagen bus, and a pickup truck. They called it the Abortion Caravan. Three thousand miles later, they “occupied” the prime minister’s front lawn in Ottawa, led a rally of 500 women on Parliament Hill, chained themselves to their chairs in the visi …