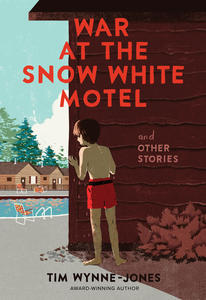 War at the Snow White Hotel is nine stories about kids getting themselves in huge messes and then trying to get out of them, one way or another. You know those totally dumb things you do by mistake or because you just weren’t thinking? Those things! But it’s also about war, the environment, stolen property, catching meteorites, and lighting your pants on fire. The usual…

Someone who has ever done something stupid (see above) and regretted it even if they got away with it. Kids who have ever had to deal with weird stuff at school. Kids who are the weird stuff that’s happening at school. And anyone who likes a story to be short!

What authors/books is your work in conversation with:

Angel Square, Brian Doyle (and everything else he ever wrote); The Secet Life of Owen Skye, Alan Cumyn; Seventh Grade, Gary Soto; The Lorax, Dr. Seuss; Liar & Spy, Rebecca Stead; The Metamorphosis, Franz Kafka; The House at Pooh Corner, A. A. Milne.

This is such a great question because every story I write is about me trying to figure something out that I didn’t know I was trying to figure out until I wrote the story. Stories are how I understand the world.

What is something your ideal interviewer would ask you about your book?

Where do you get your ideas... How much money do you make... No, I know! Why do you like reading more than any other form of entertainment?

This book is dedicated to my three writing amigos: Ken Oppel, Richard Scrimger and Arthur Slade. We don’t get together half much as I wish we could, but when we do it always makes for a good time.

Bloom, by Kenneth Oppel. I’ve read every one of Ken’s books, and this one, the first of a trilogy, looks particularly good. Can’t wait.

About War at the Snow White Motel:

In “War at the Snow White Motel,” Rex and his family are vacationing in Vermont. A thoughtless act launches him into war with an older teenager at their motel, but a much bigger conflict—the Vietnam War—looms large on the horizon.

Ant wants to join the #FridaysForFuture movement — and impressing the new girl at school is only one good reason why. Joseph and Danny are determined to right an old wrong, no matter the consequences. Michel takes a road trip to spot a rare bird, and along the way learns what his father is really afraid of. Robin has to battle her anxiety when her great-grandfather sends her in search of an old stuffed toy with a storied past. Walker is home for the summer, in time to help his little sister expose a local company’s dubious environmental practices. A boy can’t figure out why the class bully won’t leave him alone — it’s not anything he could have foreseen.

Tim Wynne-Jones brilliantly captures pivotal moments small and large as these characters fight for understanding, courage and a better future. This new collection features six brand-new stories and three that have been previously published.

War at the Snow White Motel and Other Stories

In “War at the Snow White Motel,” Rex and his family are vacationing in Vermont. A thoughtless act launches him into war with an older teenager at their motel, but a much bigger conflict — the Vietnam War — looms large on the horizon.