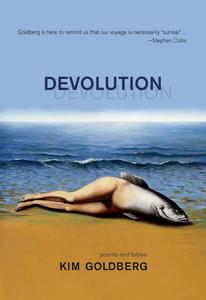 Devolution is a surreal and often absurd look at a world in collapse through poems and fables about ecopocalypse.

A person who doesn’t know where the horse is headed, or whether the horse is even constrained by Newtonian physics, but is willing to hang on tight and find out.

This book is in conversation with and inspired by fabulist writing and writers whose narratives are bounded only by imagination, and who recognize that the closer you look, the stranger the world becomes. Works such as Mrozek’s The Elephant, Pynchon’s The Crying of Lot 49, the Strugatsky brothers’ Definitely Maybe, Ciardi’s The Reason for the Pelican, Edson’s The Tunnel, and Schwartz’s Lilith’s Cave: Jewish Tales of the Supernatural.

Over the ten years I worked on this collection, the collapsing planet was mirrored by my own collapsing health. I discovered that the more dire my own circumstance and the world’s circumstance became, the more bizarre, absurd, and even ridiculous my narratives became. Dark circumstance did not usually translate to dark writing on the page but rather the opposite.

Why opt for surrealism and fabulism in your writing when the Modern Realist tradition is the celebrated model in Canadian literature?

Surrealism and fabulism spur imagination, conceptual thinking, and non-linear models of idea association (e.g., lateral leaps). We need more of all of the above at this time. Those are the processes that will generate solutions, new ways of being. Realist literature is more concerned with emotional engagement and, I would say, emotional manipulation—using narrative and image to construct and execute familiar triggers that will elicit a predictable emotional experience in the reader.

My mother Shirley Goldberg. Although she passed before this book was even completed, let alone published, she has always been my biggest champion. Her lifelong infinite appetite to see every film ever made, visit every country, sample every cuisine, read and teach every major work of literature from every culture and every epoch—to basically have a love affair with life—has made me who I am and lives on in me in everything I write.

Sonnet L’Abbé’s Sonnet’s Shakespeare and Arthur Firstenberg’s The Invisible Rainbow: A History of Electricity and Life.

Devolution is Kim Goldberg's eighth book and her personal act of extinction rebellion. The poems and fables span the Anthropocene, speaking to ecological unraveling, social confusion, private pilgrimage, urbanization and wildness. Using absurdism, surrealism and satire, Goldberg offers up businessmen who loft away as crows, a town that reshapes itself each night, a journey through caves so narrow we must become centipedes to pass. Goldberg's canvas holds both the personal and the political at once, offering rich layers of meaning, but with a playfulness reminiscent of Calvino or Borges. Each imaginative narrative will haunt the reader long after the book has been put down.

DEVOLUTION is Kim Goldberg's eighth book and her personal act of extinction rebellion. The poems and fables span the Anthropocene, speaking to ecological unraveling, social confusion, private pilgrimage, urbanization and wildness. Using absurdism, surrealism and satire, Goldberg offers up businessmen who loft away as crows, a town that reshapes its …