Today's we're launching A Match Made in Murder, by Iona Whishaw, the latest instalment in the Lane Winslow Mystery series, which Toronto's Sleuth of Baker Street Bookstore (they know mysteries!) calls "Full of history, mystery, and a glorious BC setting . . . a wonderful series." 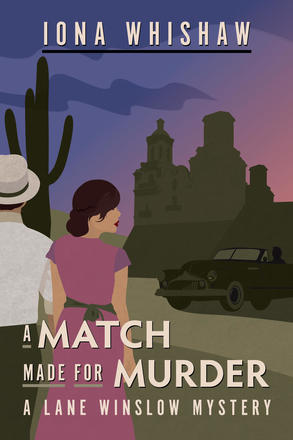 Hoping for a peaceful honeymoon in Tucson, Lane and Inspector Darling get no time for sun and cocktails, and instead find themselves embroiled in an unrestful schedule of murder, money laundering, and kidnapping.

Loves history, mystery, understated English humour, is not adverse to a spot of spying, delights in empathetic and ethical characters, is amazed by the greatest generation, and the idea of rounding out the evening with a pre-bed glass of scotch.

That it is safe to send my characters to foreign places; they still find enough dead bodies to keep them going.

Lane Winslow was inspired by your mother. In what ways?

She spied during the war, she was beautiful, a gifted linguist and behaved absolutely insanely and fearlessly, like hitchhiking on her own to Alaska with truck drivers, and she responded with her usual catch phrases to anyone expressing anxiety on her behalf: “What nonsense!” “Don’t be ridiculous.”

I especially thank my husband who must listen to endless permutations of the action as I am writing each book, and keeps track of how people die in them.

As a matter of fact I am re-reading my mother’s 1958 book, As Far As You’ll Take Me.  Next on my list is Gail Bowen’s latest, A Darkness of the Heart.

About A Match Made in Murder:

It’s November, and Lane and Darling have escaped the chilly autumn in the Kootenays for a honeymoon at the posh and romantic Santa Cruz Inn in sunny Tucson, Arizona. But despite her very best intentions to relax, soon after their arrival Lane’s plans to spend the holiday poolside with a good mystery are interrupted by gunfire. One of the hotel’s wealthy guests has been shot point blank and Lane is second on the scene.

Though Lane and Darling attempt to distance themselves from the investigation, the longer they stay at the Santa Cruz Inn, the deeper they are drawn into a web of suspects and bystanders, and a collection of seemingly perfect marriages fraught with jealousy and violence. The situation threatens first their honeymoon and then their lives when Lane puts herself directly in the sights of local criminals who will stop at nothing to get what they want.

Back in Nelson, Sergeant Ames has been left in charge of the department during Darling’s absence. As he investigates a case of vandalism at the Van Eyck garage, it seems to lead directly to the death of the suspected vandal himself. Working with Constable Terrell, the new recruit, to piece together what happened in this strange and unsettling murder, Ames finds his romantic interest in mechanic Tina Van Eyck creates complications that are more than awkward; they could be deadly.

Fans of Maisie Dobbs and the Kopp sisters will delight in the latest Lane Winslow, a study of matrimony and mirage in the American Southwest. 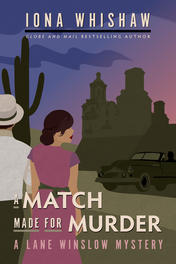 A Match Made for Murder

Lane and Darling's Arizona honeymoon is interrupted by gunshots in the newest instalment in a series Kirkus Reviews calls "relentlessly exciting."