This spring we've made it our mission (even more than usual) to celebrate new releases in the wake of cancelled launch parties, book festivals, and reading series. With 49th Shelf Launchpad, we're holding virtual launch parties here on our platform complete with witty banter, great insight, and short and snappy readings to give you a taste of the books on offer. You can request these books from your local library, get them as e-books or audio books, order them from your local indie bookseller if they're delivering, buy them direct from the publisher or from online retailers.

Today we're launching Open House: A Life in Thirty-Two Moves, the latest by Jane Christmas, whose previous memoir was a finalist for the 2014 Leacock Memorial Award for Humour. 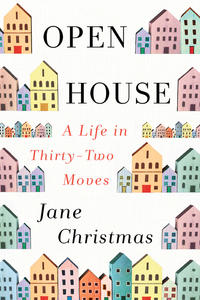 It’s a memoir viewed through the lens of all the homes I’ve lived in while I undertook the renovation of my current home.

Someone with a spirited, survivor-attitude of life despite personal vicissitudes. Enjoys period dramas, Sunday roasts, has an eclectic bookshelf—from the Bible to Ronan Farrow—and is a bit of a shit-disturber.

What authors/books is your work in conversation with:

It annoyed me that almost all the Victorian houses in our area of Bristol, England, are missing the decorative iron railings on their front garden walls. It’s a standard feature of a Victorian terrace home. While conducting my research, I discovered that during the Second World War house railings were requisitioned by an Act of Parliament in order to manufacture munitions. Government workers moved into the poorer areas first and tore all the railings out. The really sad part is that more railings were collected than were needed, but the British government didn’t have the heart to tell the people, so all those excess railings were quietly dumped into the sea.

What is something your ideal interviewer would ask you about your book?

Homelessness is a huge issue in so many Western countries. What are your thoughts on that?

Obviously, I thank The Husband for agreeing to be part of the story. He’s very uneasy with attention so his willingness to be drawn as I saw him and for letting some of our laundry be aired in public is hugely generous. I’d also like to thank Cheryll, the friend I “recovered” in the book. Words cannot express how more settled I am with her back in my life.

I have just ordered Jesse Thistle’s From the Ashes.

Moving house has never flustered author Jane Christmas. She loves houses: viewing them, negotiating their price, dreaming up interior plans, hiring tradespeople to do the work and overseeing renovations. She loves houses so much that she’s moved thirty-two times.

There are good reasons for her latest house move, but after viewing sixty homes, Jane and her husband succumb to the emotional fatigue of an overheated English housing market and buy a wreck in the town of Bristol that is overpriced, will require more money to renovate than they have and that neither of them particularly like.

As Jane’s nightmare renovation begins, her mind returns to the Canadian homes where she grew up with parents who moved and renovated constantly around the Toronto area. Suddenly, the protective seal is blown off Jane’s memory of a strict and peripatetic childhood and its ancillary damage—lost friends, divorces, suicide attempts—and the past threatens to shake the foundations of her marriage. This latest renovation dredges a deeper current of memory, causing Jane to question whether in renovating a house she is in fact attempting to renovate her past.

With humour and irreverence, Open House reveals that what we think we gain by constantly moving house actually obscures the precious and vital parts of our lives that we leave behind.

This is a memoir that will appeal to anyone whose pulse quickens at the mere mention of real estate.

A Life in Thirty-Two Moves

Moving house has never flustered author Jane Christmas. She loves houses: viewing them, negotiating their price, dreaming up interior plans, hiring tradespeople to do the work and overseeing renovations. She loves houses so much that she’s moved thirty-two times.

There are good reasons for her latest house move, but after viewing sixty homes, Jane …