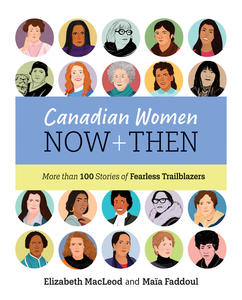 To the newish tradition of biographical anthologies of women whose stories deserve to be better known (think Rad Women Worldwide, Goodnight Stories for Rebel Girls, and the excellent and Canadian-grown The Girl Who Rode a Shark) comes Canadian Women Now and Then, which puts a fresh twist on the genre by pairing  Canadian legends (think Roberta Bondar, Karen Kain, Emily Carr) with inspiring contemporary examples (introducing astronaut Jennifer Sidney-Gibbons, dancer Santee Smith (Tekaronkiahkhwa) and artist Christi Belcourt). Sometimes the contemporary women are the better known of the pair—journalist Sook-Yin Lee is profiled alongside Mary Ann Shadd, who in 1853 became the first Black woman in Canada to run a newspaper; Olympic swimmer Penny Oleksiak appears with Fanny "Bobbie" Rosenfeld, who competed as a runner in the 1928 Olympics. The Canadian-specific focus of this book is novel, and it's the connections between the women profiled that is especially meaningful, underlining that extraordinary women aren't outliers, but part of the tapestry of our society.

In Good Hands: Remarkable Female Politicians From Around the World Who Showed Up, Spoke Out, and Made Change, by Stephanie MacKendrick

For teen readers, and particularly those who were inspired by the recent documentary Knock Down the House, comes a book that's part vision board and part tool kit for young women looking to make a difference. Former journalist MacKendrick writes about women including New Zealand's Prime Minister Jacinda Ardern; Canadians Catherine McKenna, Rona Ambrose, Kim Campbell, Michelle Stilwell (who was a Paralympic Gold Medallist before becoming an MLA in British Columbia), and former Premier of Nunvavut, Eva Aariak; and other women representatives from countries including Israel, Jordan, Afghanistan, and the US—including Kirsten Gillibrand and Cori Bush, who was part of Knock Down the House and did not win her election, but came away with stories to share and lessons learned. The second part of In Good Hands is a playbook for aspiring candidates, helping them to pave the way for a society with more equal representation.

Canadian Women Now and Then

More than 100 Stories of Fearless Trailblazers

This timely and relevant collection of fascinating stories about groundbreaking Canadian women, present and past, offers an inspiring, one-of-a-kind look at Canadian history.

The Girl Who Rode a Shark

And Other Stories of Daring Women

An inspiring biographical collection celebrating the adventurousness and ingenuity of girls and women around the world.

Now more than ever, the world is recognizing how strong women and girls are. How strong? In the early 1920s, Inuit expeditioner Ada Blackjack survived for two years as a castaway on an uninhabited island in the Arctic Ocean before …

Remarkable Female Politicians from Around the World Who Showed Up, Spoke Out and Made Change

Written for young women interested in running for office, this book is unlike any other, with inspiring stories of eighteen women role models along with the all the tools and resources needed to get a campaign off the ground.