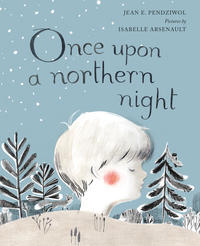 Once Upon a Northern Night, by Jean E. Pendziwol, illustrated by Isabelle Arsenault, is the perfect mentor text for descriptive language. While a little boy sleeps, a snowy night scene is painted for both the boy and the reader.

“Once upon a northern night/pine trees held out prickly hands/to catch the falling flakes/that gathered into puffs of creamy white,/settling like balls of cotton,/waiting.” Check out Pendziwol’s description of deer: “They nuzzled the sleeping garden/with memories of summer.” And “... a great gray owl gazed down/with his great yellow eyes/on the milky-white bowl of your yard.” There are also some beautiful examples of alliteration.

Another go-to text for vivid language, When the Moon Comes, by Paul Harbridge, illustrated by Matt James, captures a nighttime hockey game in the woods.

“End to end and around we fly, the long black stripes of our shadows moving across the moonlit ice.” James’ lush, indigo pictures match the intensity of the language. Along with alliteration, figurative language abounds. There are similes: “Our wet pants freeze solid in the cold, and we walk clanking like knights in armour, lances over our shoulders, hoods like helmets around our faces.” And personification: “... the face of the sky is freckled with stars.” 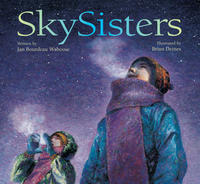 The evocative language in Sky Sisters, by Jan Bourdeau Waboose, illustrated by Brian Deines, elicits all senses. Waboose captures the wind, the darkness and the cold as two sisters climb a mountain of snow to see the Northern Lights.

Each sentence lays down one more step toward the climactic sky alive with colour; for example, “Sister’s hair falls free from her hat and swirls about her face. Her purple scarf twists and turns behind her. She leans into the wind and stretches her arms out to me.” Try reading this one aloud, with the illustrations hidden; the words will conjure the imagination. The occasional simile also appears: “Her words are as soft and light as the snowflakes.” 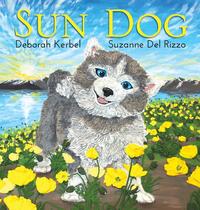 Sun Dog, by Deborah Kerbel, illustrated by Suzanne Del Rizzo, is the story of Juno, a sled dog pup who longs to be big.

Rich language is evident throughout: “The sun looks like a yellow ball bouncing low over the mountains. The sand-coloured sky is like a wide-open beach. The air is as soft as a whisper.” The similes continue:  “It’s strange to be outside without her boy. [Juno] feels like an iceberg adrift on a giant sea ... Her heart pounds like a stampede.” The dog ends up protecting the boy from a polar bear: “An army of fur and fangs rally around Juno. A storm of barking shatters the midnight sun.” 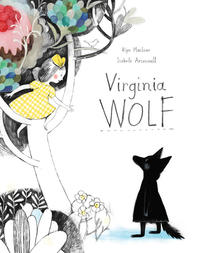 Virginia Wolf, by Kyo Maclear, illustrated by Isabelle Arsenault, is about a girl coaxing her sister out of the doldrums.

“I painted trees and strange candy blossoms and green shoots and frosted cakes. I painted leaves that said hush in the wind and fruit that squeaked, and slowly I created a place called Bloomsbury. I made it look just the way it sounded.” For the savvy older reader, the story itself is a metaphor for transformation with the sister trying to tame her sibling’s inner wolf: “The whole house sank. Up became down. Bright became dim. Glad became doom.” 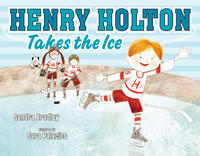 Alliteration is scattered throughout, in the description of skating skills: “He swished, swooshed, and swaggered.” And when Henry first sees figure skaters: “The skaters below were like kites—brightly coloured kites, swirling and twirling in the wind.” Grandma has her own way of describing her hockey career: “... I finally picked up the lumber and landed the biscuit in the five-hole with a mighty slap shot.” (A glossary at the back explains Grandma’s phrases.) 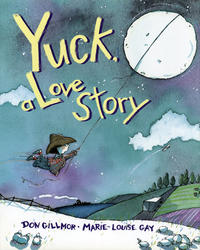 Yuck, a Love Story, by Don Gillmor, illustrated by Marie-Louise Gay, has a simplicity in the language that appeals to younger grades. “The moon was as round as a plum.” “Her birthday dress was red and it shimmered slightly when she walked.”

Gillmor provides just enough description to build character and tell the story: “She had curly blonde hair and freckles on her nose. Her shoes had small bows on them.” 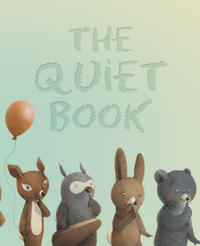 The Quiet Book, by Deborah Underwood, illustrated by Canadian Renata Liwska, is useful for student writers in that each page depicts a different kind of quiet. For example: “Lollipop quiet/ Best friends don’t need to talk quiet.” This one’s a great lesson in how an idea can be described in a multitude of ways.

Once Upon a Northern Night

In this exquisite lullaby, the beauty and wonder of a northern winter night unfold, with images of a soft snowfall, the wild animals that appear in the garden, the twinkling stars, the gentle rhythm of the northern lights and the etchings of frost on the window pane.

As the young child sleeps, wrapped in a downy blanket, a snowflake falls, and then …

When the Moon Comes

In this atmospheric story, a group of kids play hockey on a frozen lake by moonlight. At once nostalgic and timely, this is a gorgeous book that will speak to readers young and old.

The beaver flood has finally frozen--perfect ice, without a bump or a ripple. For the kids in town, it's Christmas in November. They wait, impatiently, for the right mom …

Two Ojibway sisters set off across the frozen north country to see the SkySpirits' midnight dance. It isn't easy for the younger sister to be silent, but gradually she begins to treasure the stillness and the wonderful experiences it brings. After an exhilarating walk and patient waiting, the girls are rewarded by the arrival of the SkySpirits --- …

Juno and her boy live in a red house at the top of the world. One day Juno will be big and strong enough to help pull a sled across the tundra, but f …

Austin Grouper had a brown dog named Fresco, a best friend named Sternberg, and a red bicycle. His life was full. And then a girl named Amy moves in next door. Austin decides that she, like all girls, is yucky. But when the invitation to her birthday party arrives, it seems the only suitable present for Amy is the moon itself, and Austin is prepare …

All quiet is not created equal. In this irresistibly charming picture book, many different quiet moments are captured, from the anticipation-heavy “Top of the roller coaster quiet” to the shocked-into-silence “First look at your new hairstyle quiet.” The impossibly sweet bears, rabbits, fish, birds, and iguanas are all rendered in soft penc …