The jury says "Small in the City is visually stunning. The feeling of winter in the city from a child’s perspective is rendered with remarkable feeling and sensitivity. But the genius of the book turns on the collaboration of the pictures and the text—the voice, the pacing and the gentle but striking exposition live up to the brilliance of the illustrations. A tour de force.”

Sydney Smith is an author/illustrator of children’s books. He has illustrated numerous acclaimed children’s books, including Town Is by the Sea, written by Joanne Schwartz, and the wordless picture book Sidewalk Flowers, conceived by JonArno Lawson, which won the 2015 Governor General’s Literary Award and many other honours. Smith has received the New York Times Best Illustrated Children’s Book Award three times. He studied drawing and printmaking at NSCAD University. He lives and works in Halifax, Nova Scotia, with his wife and two children.

THE CHAT WITH SYDNEY SMITH

The jury describes Small in the City as a “tour de force.” What can you tell us about the inspiration for the book?

When I was writing Small in the City my family and I were living in a downtown neighbourhood of Toronto. It was not the most peaceful, or ideal place to raise a family but it was our home. As I walked with my son through the area I observed how he interacted with it. It was noisy and busy and cold but he knew it as his own environment. I wanted to show a slightly different setting than I had seen in other picture books. All of the illustrations reference that area where we lived.

I also wanted to speak to the capacity for complex emotions that children have. I hope that the book can be a safe place for young readers (and old) to explore empathy and emotions that don't need to be labelled. A very close friend of mine passed away while I worked on this book. I was able to use this book as means of catharsis. In between the words and undercoating the illustrations there is love and loss.

Can you talk more about what's at the heart of the book—the things that make us feel less small in the city? How much of a challenge was it to convey this experience visually?

It was not a challenge to convey the feeling. I looked out my window or took a walk down the street. I painted the city, sitting on benches or took photos with my father's old camera. I made it easy on myself by setting my story in my own backyard. I designed the book to be tall and the panels on the page to reflect the windows of buildings. Also, the pace to be fast at first and then slow down as the snow storm intensifies and the city disappears.

I designed the book to be tall and the panels on the page to reflect the windows of buildings. Also, the pace to be fast at first and then slow down as the snow storm intensifies and the city disappears.

For me and the character in the book, feeling small in the city it is not negative. I love feeling small in the city. It is an exciting feeling to to be part of such a large gathering of people doing their own things. There is more feeling of isolation in a big city than in a small town.
To learn more about what Sydney Smith’s creative process, check out our 2015 conversation with Sydney and JonArno Lawson.

Excerpted pages from Small in the City 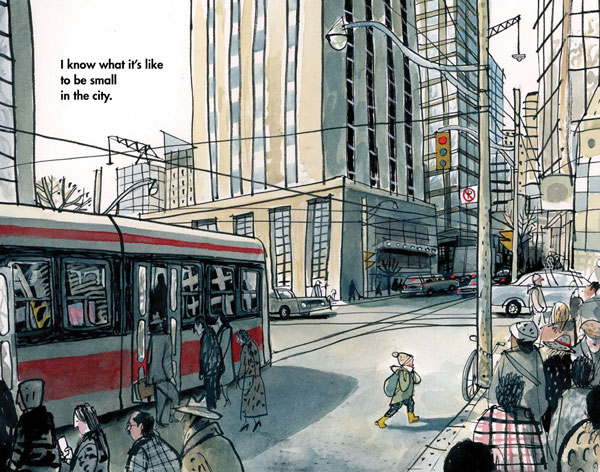 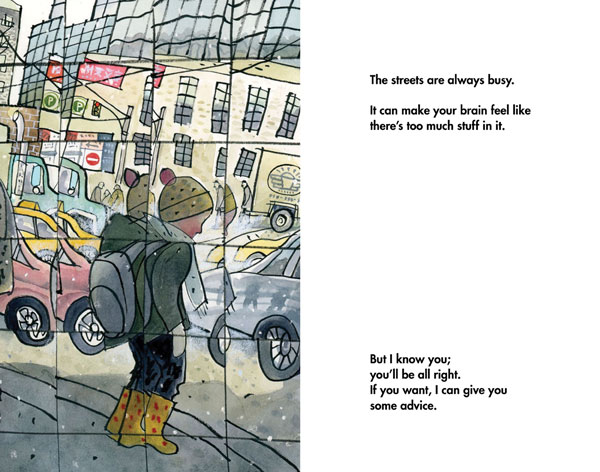