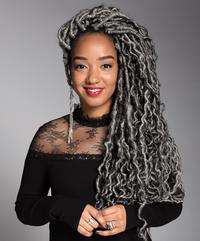 Renowned CBC radio host Amanda Parris is this year’s Governor General’s Award winner for Drama for Other Side of the Game (Playwrights Canada Press).

The jury praised the work, saying, “Other Side of the Game courageously examines the struggles of young Black women and their loved ones as they navigate an unjust system. Parris crafts a portrait of the early years of Black activism, and parallels it with the present day. Enraging and engaging, this gripping and passionate play challenges dominant narratives to reveal the painful truths of life for marginalized Canadians in our society.”

By day, Amanda Parris is a television and radio host and writes a weekly column. By night, she writes stories for the stage and screen. Other Side of the Game is her first published play. In Amanda’s past lives she was an educator who wrote arts-based curricula, attended numerous acting auditions and dreamed of opening a school that Blue Ivy Carter would attend. Over the course of her career, Amanda has worn a variety of hats, working as an educator, a researcher, an actor and a community organizer.

She is the co-founder of the award-winning alternative education organization Lost Lyrics and worked with the Remix Project and the Manifesto Festival. She has spoken about her work at United Nations conferences around the world. Parris completed her Honours B.A. degree in Political Science and Women’s Studies at York University and her M.A. degree in Sociology of Education at the University of Toronto. She was a playwright-in-residence at Cahoots Theatre Company and Alameda Theatre Company and studied writing and acting at b current performing arts, anitafrika dub theatre and the Lee Strasberg Theatre & Film Institute.

THE CHAT WITH AMANDA PARRIS

Congrats on your Governor General’s Award, Amanda! How does it feel to be recognized by your peers in this way for your debut?

Thank you! This is an overwhelming honour that far surpasses any of my expectations for the play. To be honest, I’ve been struggling to accept that this is real life. More than anything, I have so much gratitude for those that read this story and acknowledged it as one that is worthy of this recognition and celebration. It is an affirmation not only of my writing but also (and more importantly) of the experiences that inspired it. This win tells me and the country that these stories belong in the Canadian literary canon.

Other Side of the Game traces the roots of 1970s Black activism and parallels this period to the present day. What were some of your inspirations for the work?

The most important inspiration behind this work was the stories I heard from women who were supporting loved ones that were incarcerated. I began doing these informal interviews with women, not knowing at first what I would do with their stories but I was driven by this impulsive need to create space for their experiences and to document them (with an audio recorder). I used to listen to the interviews over and over. It compelled me to start researching topics like mass incarceration, the prison industrial complex, and the activists that have been working for decades to combat these systems. I considered creating a documentary or using the interviews as a launching pad for future academic research but eventually I realized that the medium with the most possibility and accessibility (for me and for the audience) was the theatre.

Tell us more about what was involved in getting the work to the stage.

It was a really long process to get Other Side of the Game to the stage. After writing the first draft, I applied to Cahoots Theatre for a Theatre Creators Reserve grant. They turned me down but instead offered me something much better: a place within their Hot House Playwrights Unit. I worked alongside a number of other very talented playwrights for a year, developing our work and giving each other feedback. I was then invited to become the Playwright-in-Residence at Cahoots and worked directly with then Artistic Director Marjorie Chan on the script. During that time I would also present readings of the play at various festivals such as the Piece of Mine Festival and the rock paper sistahz festival to test out the material. It was amazing to hear and see audiences react and respond to the characters and plot points. They let me know I was on the right path.

I was initially writing the play, hoping that it could become a vehicle for my budding acting aspirations, but after watching other actors perform the lines, I realized it was far more enriching to see my words come to life, rather than recite them myself. We held a closed workshop of the play for a week, working with a full cast, choreographer and director Nigel Shawn Williams. It was in that week of experimentation that many discoveries were made.

Finally, in 2016, Other Side of the Game was produced on stage thanks to Cahoots Theatre and Obsidian Theatre.

In your opinion, what more needs to be done to ensure that Canada remains a vital, envied world leader in theatre? What’s your feeling about the current generation of theatre artists working in Canada?

I think there are a lot of really exciting things happening in the world of Canadian theatre. There are so many unique, complex and compelling stories being developed. Canadian theatre companies need to keep producing and developing Canadian work and pushing themselves to realize what stories they are not telling and which communities they are not reaching.

Traditional outreach and marketing models need to be reimagined and pushed so that more people recognize and consider the theatre as a space they want to engage and spend time in. And (putting on my media hat now), performing arts unions need to reconsider their limitations on what can be captured on film so that theatre and the performing arts can be covered by more media. Right now it is incredibly difficult for television shows to cover theatre plays because of the strict rules on taping performers and original shows. The amount of red tape prevents outlets from telling compelling stories about the incredible art that is being made all the time on Canadian stages. If you want media to help bring audiences into the theatre then the rules need to be reconsidered.

I am currently reading Ian Williams’ novel Reproduction, which is definitely turning out to be a fascinating ride. Last month I read Black Life: Post BLM and the Struggle for Freedom by Rinaldo Walcott and Idil Abdillahi, Tetsuro Shigematsu’s play 1 Hour Photo and the novel Dual Citizens by Alix Ohlin.

Excerpt from Other Side of the Game

It is 1970-something and we are back at the meeting being held by the Movement. Throughout the meeting Khalil glances at Beverly and exchanges a smile or two. Akilah notices and is visibly uncomfortable. Beverly is taking notes.

Khalil: What we need to do is start building a vision for the future.

Elder: What does that mean?

Khalil: We need to stop reacting and begin building.

Elder: Who invited the poet?

Akilah: Okay. Elder, what do you think we should do?

Elder: We should be focusing our efforts on lobbying.

We have to reform the system. We can’t spiral out of control, rioting and mashing up the place. We need to rein the people them back in.

Khalil: Why? There is a rise in Black militancy. Black people aren’t begging—

Elder: Black militancy? What are you trying to do? Build an army? Start shooting at the pigs?

Khalil: People have a right to be angry.

Elder: I’m not saying that they don’t but—

Akilah: My son is eight years old and I can see teachers trying to devalue his worth every day. I can see him confused and angry. Josiah has a right to be angry.

Elder: So what—you want to teach Josiah to riot?

Akilah: No. I am going to teach Josiah how to channel his anger, know the power of his voice. I want him to be able to stand up and defend himself when a teacher—

Elder: How touching. Listen, young lady, there is a distinct difference between holding up a placard at Christie Pits and organizing a community.

Akilah: My name is not young lady.

Elder: Aren’t you supposed to be taking the minutes?

Beverly: I think… if I may… I think that the problem is we don’t know how powerful we are.

Elder: Who are you? Who is she?

Beverly: I’m Beverly. Hi. I’m new. I just… I think that… I mean I’m not an expert but I don’t think that you can expect society to change if you’re not ready to take the first step.

Elder: The first step? My girl, I’ve taken the first, second, third and fourth steps! Do you know how long I’ve been doing this?

Beverly: I… I just think that if we’re building a real Black political movement then we have to make sure that…

Beverly: I don’t know… nothing. Sorry.

Beverly: Well I just think that people have to start thinking about what resistance means on an individual level—like personally.

Khalil: I think I get what the sister is saying. So for example, one step someone might want to take is getting the white out of their hair.

Beverly: That’s not exactly what I—

Khalil: A second step could be getting the white out of their mind.

Elder: Are you insinuating that—?

Akilah: Ahhh I think I know where you’re going with this, brother. Maybe a third step could be… for a few people in this meeting… getting the white woman out of their bedroom.

Elder and Khalil react at the same time.

Elder: Now we don’t have to start going into people’s private affairs—

Khalil: I don’t think that’s pertinent to the conversation—

Elder: I say we take another break.

Khalil: I agree. Yes, a break is good.

Akilah: Look at that. You’ve finally found something you both can agree on.