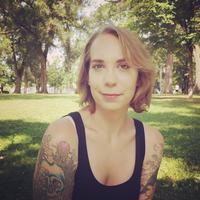 Ed note: This post has been updated in light of an investigation into Gwen Benaway's claims of Indigenous identity. Benaway has not, at the time of this writing, responded to evidence that she has misrepresented her status. We have removed all references to that claimed identity so that it does not continue to occupy space in Indigenous literature.

Gwen Benaway is the author of previous poetry collections Ceremonies for the Dead and Passage. Holy Wild was also named a finalist for the Trillium Book Award for Poetry, the Lambda Literary Award for Transgender Poetry, and the Publishing Triangle Award for Trans and Gender-Variant Literature, and longlisted for the Pat Lowther Memorial Award. Benaway is also the editor of an anthology of fantasy short stories titled Maiden Mother and Crone: Fantastical Trans Femmes. She has been a finalist for the Dayne Ogilvie Prize for LGBTQ writers from the Writers' Trust of Canada, and her personal essay, "A Body Like A Home," was the Gold Prize Winner for the National Magazine Awards in Personal Journalism. day/break, her fourth book of poetry, is forthcoming from Book*hug in Spring 2020. She is also currently editing a book of creative non-fiction, trans girl in love. She lives in Toronto and is a PhD student at the University of Toronto in the Women and Gender Studies Institute.

THE CHAT WITH GWEN BENAWAY

What does winning a Governor General’s Award mean to you at this particular point in your career?

Being the first trans woman to win the Governor General’s award for poetry is a strange experience. When the news was announced, I was leading a protest at the Toronto Public Library over their decision to host a transphobic speaker who was advocating against my existence and access to public life. I was kettled in the library by the Toronto Police during the protest, a strange moment where I was being “celebrated” for my artistic achievement while being forcibly dehumanized as a trans woman by several institutions. For me, winning the award means a chance for a slightly better life and keeps me from being homeless for a while longer.

How important is your win for increasing the visibility of trans writers in Canada and beyond?

I don’t think representation is a good project for subverting oppression. Representation often means tokenization or the oppressors choosing one person to represent their entire community. I can only speak for myself and my experience which may reflect other trans women’s lives, but I can’t be a representative of anything larger than myself. Winning an award may help an individual, but there are much more powerful community-based gestures to focus on, like mentorship, peer support, and building community resilience.

I think folks should look to Arielle Twist and Jaye Simpson. They are going to do extraordinary things and should be supported as they develop as artists. There’s so many incredible BIPOC writers and trans/queer writers that folks should be reading right now.