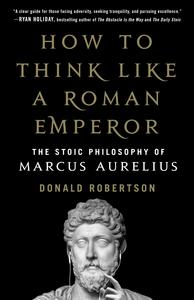 Roman emperor Marcus Aurelius was the last famous Stoic philosopher of the ancient world. The Meditations, his personal journal, survives to this day as one of the most loved self-help and spiritual classics of all time. In How to Think Like a Roman Emperor, cognitive psychotherapist Donald Robertson weaves the life and philosophy of Marcus Aurelius together seamlessly to provide a compelling modern-day guide to the Stoic wisdom followed by countless individuals throughout the centuries as a path to achieving greater fulfillment and emotional resilience.

The year is 180 AD. As another long and difficult winter draws to a close on the northern frontier, the Roman emperor Marcus Aurelius lies dying in bed at his military camp in Vindobona (modern-day Vienna). Six days ago he was stricken with a fever, and the symptoms have been worsening rapidly. It’s clear to his physicians that he is finally about to succumb to the great Antonine Plague (probably a strain of smallpox) that has been ravaging the empire for the past fourteen years. Marcus is nearly sixty, physically frail, and all the signs show he’s unlikely to recover. However, to the physicians and courtiers present he seems strangely calm, almost indifferent. He has been preparing for this moment most of his life. The Stoic philosophy he follows has taught him to practice contemplating his own mortality calmly and rationally. To learn how to die, according to the Stoics, is to unlearn how to be a slave.

This philosophical attitude toward death didn’t come naturally to Marcus. His father passed away when he was only a few years old, leaving him a solemn child. When he reached seventeen, he was adopted by the Emperor Antoninus Pius as part of a long-term succession plan devised by his predecessor, Hadrian, who had foreseen the potential for wisdom and greatness in Marcus even as a small boy. Nevertheless, he had been most reluctant to leave his mother’s home for the imperial palace. Antoninus summoned the finest teachers of rhetoric and philosophy to train Marcus in preparation for succeeding him as emperor. Among his tutors were experts on Platonism and Aristotelianism, but his main philosophical education was in Stoicism. These men became like family to him. When one of his most beloved tutors died, it’s said that Marcus wept so violently that the palace servants tried to restrain him. They were worried that people would find his behavior unbecoming of a future ruler. However, Antoninus told them to leave him alone: “Let him be only a man for once; for neither philosophy nor empire takes away natural feeling.” After losing several young children, Marcus was once again moved to tears in public while presiding over a legal case, when he heard an advocate say in the course of his argument: “Blessed are they who died in the plague.”1

Marcus was a naturally loving and affectionate man, deeply affected by loss. Over the course of his life, he increasingly turned to the ancient precepts of Stoicism as a way of coping when those closest to him were taken. Now, as he lies dying, he reflects once again on those he has lost. A few years earlier, the Empress Faustina, his wife of thirty-five years, passed away. He’d lived long enough to see eight of their thirteen children die. Four of his eight daughters survived, but only one of his five sons, Commodus. Death was everywhere, though. During his reign, millions of Romans throughout the empire had been killed by war or disease. The two went hand in hand, as the legionary camps were particularly vulnerable to outbreaks of plague, especially during the long winter months. The air around him is still thick with the sweet smell of frankincense, which the Romans vainly hoped might help prevent the spread of the disease. For over a decade now, the scent of smoke and incense had been a reminder to Marcus that he was living under the shadow of death and that survival from one day to the next should never be taken for granted.

Infection with the plague wasn’t always fatal. However, Marcus’s celebrated court physician, Galen, had observed that victims inevitably die when their feces turn black, a sign of intestinal bleeding. Perhaps that’s how Marcus’s doctors know he is dying, or maybe they just realize how frail he’s become with age. Throughout his adult life he has been prone to chronic chest and stomach pains, and bouts of illness. His appetite has always been poor. Now he voluntarily rejects food and drink to hasten his own demise. Socrates used to say that death is like some prankster in a scary mask, dressed as a bogeyman to frighten small children. The wise man carefully removes the mask and, looking behind it, he finds nothing worth fearing. Because of this lifelong preparation, now that his death finally draws near, Marcus is no more afraid of it than when it seemed far away. He therefore asks his physicians to describe patiently and in detail what’s happening inside his body, so that he may contemplate his own symptoms with the studied indifference of a natural philosopher. His voice is weak and the sores in his mouth and throat make it difficult for him to speak. Before long he grows tired and gestures for them to leave, wishing to continue his meditations in private.

Alone in his room, as he listens to the sound of his own wheezing, he doesn’t feel much like an emperor anymore—just a feeble old man, sick and dying. He turns his head to one side and catches a glimpse of his reflection on the polished surface of the goddess Fortuna’s golden statuette by his bedside. His Stoic tutors advised him to practice a mental exercise when he noticed his own image. It’s a way of building emotional resilience by training yourself to come to terms with your own mortality. Focusing his eyes weakly on his reflection, he tries to imagine one of the long-dead Roman emperors who preceded him gazing back. First he pictures Antoninus, his adoptive father, and then his adoptive grandfather, the emperor Hadrian. He even imagines his reflection slowly assuming the features depicted in paintings and sculptures of Augustus, who founded the empire two centuries earlier. As he does so, Marcus silently asks himself, “Where are they now?” and whispers the answer: “Nowhere . . . or at least nowhere of which we can speak.”

He continues to meditate patiently, albeit drowsily, on the mortality of the emperors who preceded him. There’s nothing left of any of them now but bones and dust. Their once illustrious lives have gradually become insignificant to subsequent generations, who have already half-forgotten them. Even their names sound old, evoking memories of another era. As a boy, the Emperor Hadrian had befriended him, and the two used to go boar hunting together. Now there are young officers under Marcus’s command for whom Hadrian is just a name in the history books, his real, living body long ago replaced by lifeless portraits and statues. Antoninus, Hadrian, Augustus—all equally dead and gone. Everyone from Alexander the Great right down to his lowly mule driver ends up lying under the same ground. King and pauper alike, the same fate ultimately awaits everyone . . .

Excerpt from How to Think Like a Roman Emperor, by Donald Robertson, St. Martin's Press, 2019. Used with permission of the publisher.

How to Think Like a Roman Emperor takes readers on a transformative journey along with Marcus Aurelius, following his progress from a young noble at the court of Hadrian—taken under the wing of some of the finest philosophers of his day—through to his reign as emperor of Rome at the height of its power. Robertson shows how Marcus used philosophical doctrines and therapeutic practices to build emotional resilience and endure tremendous adversity, and guides readers through applying the same methods to their own lives.

Combining remarkable stories from Marcus's life with insights from modern psychology and the enduring wisdom of his philosophy, How to Think Like a Roman Emperor puts a human face on Stoicism and offers a timeless and essential guide to handling the ethical and psychological challenges we face today.