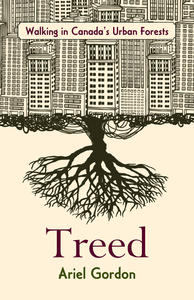 Standing on the sidewalk under a boulevard elm, looking up into its branches….that’s easy. All I need to do is step out my front door. But writing about it? Trying to describe what it’s like to live under the urban forest in a medium-sized city, how wonderful and threatened the trees are here and elsewhere? Well, that’s another thing altogether...

I feel like I’ve been prepping to write this book for half my life—when I was studying for my BSc and writing poems, when I was taking macro photographs of mushrooms in Assiniboine Forest and writing about then on my blog—but I only really started writing the essays that would become Treed four years ago. And I only really figured out how to write the essays I needed to write last year, after multiple drafts and abandoned stubs of essays.

Though not everyone’s comfortable with the personal essay, I discovered that it was the only way I could write about the trees, about urban nature. So I wanted to share a few texts that helped me to get comfortable with the form, some by colleagues and friends and some by writers I don’t know but greatly admire.

I’m including the first sentence of each of the books as an enticement, as proof that liking someone very much does not mean that I am more than usually biased.

“The night unleashes the sudden cry of the peacock, perched on the maple outside our bedroom. When he’s in season Ajax considers it his duty to warn every sheep or leaf to stay away. Our tom, Wu, has ignited him.”

I have this thing where I’ll often avoid things that are wildly popular: I refused to listen to U2 when I was a teenager, for instance, because everyone around me was going bananas for their music. That perversity explains why I was reluctant to read Brian Brett’s Trauma Farm, but when I did, purely for research I told myself, I loved it despite myself. I loved how it moved through the hours of a day on Brett’s family farm on Salt Spring Island, each chapter an hour in the day.

Beyond this enviable and seemingly unforced structure, Trauma Farm is full of visceral bawdy detail, which is my favourite kind.

A Profession of Hope: Farming on the Edge of the Grizzly Trail, by Jenna Butler

“In an era of large-scale agribusiness and multinational corporations dedicated to the privitization and control of the world’s seed stocks for profit, starting out as a small-scall farmer seems like an uphill slog, a thankless task.”

Red Deer writer Jenna Butler teaches creative writing, writes, and has built a small farm out of the bush in northern Alberta. She and her husband Thomas, both city-dwellers, taught themselves how to live off the grid and to be stewards of the land they farm. I can barely manage to keep my kitchen floor clean. (It’s not clean now.)

I first encountered A Profession of Hope when I listened to Jenna read from it at a conference. Since then, I’ve been the beneficiary of Jenna’s generosity many times, but that’s not why I find myself reading and re-reading her book. I take A Profession of Hope like medicine, when I need an infusion of wisdom, beauty, and smarts.

“Will I ever catch up to him? In his yellow shirt, he has pedaled so far ahead that he’s almost out sight. I want to stop for a rest. My hands, ass, legs, shoulders hurt. He’s racing the wind or rain, has set a pace and is sticking to it, some overplayed Madonna song driving him.”

Victoria poet Yvonne Blomer and I toured our last books together. The reason I like Yvonne so much is because she’s such an a great writer and community member; she’s better than me in so many ways but she lets me travel beside her.

Readers of Sugar Ride will have a similar feeling, shadowing Yvonne as she revisits a trip she took twenty years ago with her husband-to-be Rupert, cycle-touring through Vietnam and Malaysia after teaching English in Japan. Yvonne has type 1 diabetes and has to carry much of the medical supplies for their trip in addition to all her worries and doubts about the trip, then and now. It’s a heavy load but it’s skillfully handled.

The Light Through the Trees: Reflections on Land and Farming, by Luanne Armstrong

“The dog knows. He stands beside my desk, his tail wags very slightly, his fierce collie stare fixed on my face. Yes, yes, all right. I have been in front of the computer for several hours, teaching a class of writers who live all over the world.”

I have lived on the prairies my whole life. But what I recognize about this book is its exploration of Luanne Armstrong’s connection to a piece of land, even if that piece of land is a farm in the Kootenays.

I like how The Light Through the Trees looks at how the land had been used, is being used, how it is changing, how she is changed by it. I love how she uses that hard-won knowledge to explore her identity as a writer, her ties to community, to a life lived in a small place. I wish I had written this book, but I’ll settle for re-reading it every year…

Gathering Moss: A Natural and Cultural History of Mosses, by Robin Wall Kimmerer

“Barefoot, I’ve walked this path by night for nearly twenty years, most of my life it seems, the earth pressing up against the arch of my foot. More often than not, I leave my flashlight behind, to let the path carry me home through the Adirondack darkness.”

Gathering Moss is the first book by Potawatomi writer and botanist Robin Wall Kimmerer. It was the first book I’d read that combined science writing and the personal essay, the first book that put Indigenous and Eurowestern teachings in conversation with each other.

When I first started writing Treed, this was the book I looked to as an example of what was possible. It encouraged me to use all of my experience and training in a way that I never had, to reach across disciplines, to attempt things I didn’t think I was capable of. I couldn’t have written Treed without this book.

With intimacy and humour award-winning poet Ariel Gordon walks us through the streets of Winnipeg and into the urban forest that is, to her, the city's heart. Along the way she shares with us the lives of these urban trees, from the grackles and cankerworms of the spring, to the flush of mushrooms on stumps in the summer and through to the red-stemmed dogwood of the winter. After grounding us in native elms and ashes, Gordon travels to BC's northern Rockies, to Banff National Park and a cattle farm in rural Manitoba, and helps us to consider what we expect of nature. Whether it is the effects of climate change on the urban forest or foraging in the city, Dutch elm disease in the trees or squirrels in the living room, Gordon delves into our relationships with the natural world with heart and style. In the end, the essays circle back to the forest, where the weather is always better and where the reader can see how to remake even the trees that are lost.

A Rebel History of Rural Life

Beginning naked in the darkness Brian Brett takes us on a journey through a summer’s day that also tells the story of his affectionately named Trauma Farm?exploring the garden, orchards, fields, the mysteries of live-stock and poultry, and the social intricacies of rural communities.

Both a memoir and a natural history of the small mixed farm, thi … 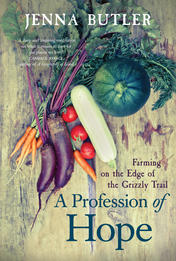 Profession of Hope, A

Farming on the Edge of the Grizzly Trail

Early in the winter of 2006, Jenna Butler found herself standing on a cold country road, looking over an unpromising quarter section of northern bush. With the glow of her car’s headlights, she surveyed an abandoned grain bin, listened to the howl of a coyote pack and the call of a great horned owl, and knew a switch had flipped inside of her. Pa … 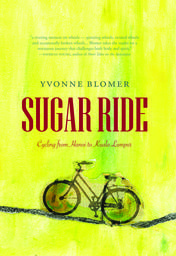 Cycling from Hanoi to Kuala Lampur

Blomer takes you into Southeast Asia by bicycle with her husband Rupert, their two companion-like bikes and her experiences cycling over 4000km through 4 countries over three months with the little devil she takes everywhere, her type 1 diabetes. A travel memoir, Sugar Ride explores the love of cycling and the roads it can pull you up, down and alo … 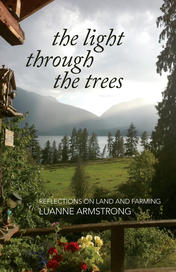 The Light Through the Trees

Reflections on Land and Farming

The Light Through the Trees is a remarkable and deeply wise reflection on land, farming, a sense of place, connecting with nature and what it means to live on this earth. As a third-generation farmer, the author’s roots go deep into the land but her work also captures her thoughts on such current issues as the environment, environmental identity … With intimacy and humour award-winning poet Ariel Gordon walks us through the streets of Winnipeg and into the urban forest that is, to her, the city's heart. Along the way she shares with us the lives of these urban trees, from the grackles and cankerworms of the spring, to the flush of mushrooms on stumps in the summer and through to the red-stem …