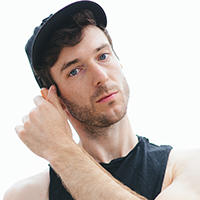 Trevor Corkum: This is your second Governor General's Award win for drama. How does it feel to be recognized by your peers this second time around?

Jordan Tannahill: It feels just as extraordinary as the first time. It was a great honour to be recognised alongside such a strong group of finalists.

TC: You’re a prolific artist. How does working across so many creative media inform your practice?

JT: I try to allow each idea or question to dictate the form it will take. I find this a very liberating and intuitive way of working. It also means that sometimes, if I become fixated on something for a period of time—say, the mortality of my mother, as I have been since she was diagnosed with terminal cancer—I may approach it from a variety of perspectives and through a variety of forms.

In the case of my mother’s mortality, I ended up creating a kind of informal trilogy—Declarations, a play; Liminal, a novel; and Draw Me Close, a virtual reality experience—all very different pieces, but all connected by this shared inspiration.

TC: You announced on Facebook that you’ll be donating your prize money to activist work in Hungary (where you currently reside). Can you talk more about this decision and what you hope to accomplish?

JT: I have been living part-time in Budapest since the late summer as my partner James embarks on a PhD at the Central European University; an institution Hungary’s prime minister Viktor Orbán has sought to shut down for the past couple of years. Because of Orbán’s antagonism, the CEU has been forced to make a decision that this will be its last year enrolling new students in Budapest before relocating most of its operations to Vienna; making Orbán's government the first in post-war Europe to shut down a free university.

This is part of a pattern of behaviour by the Orbán regime, promoting a model it describes as "illiberal democracy," that has created a hostile environment for alternative voices, many of which were already on the margins. From constitutional changes which curb the independence of the judiciary, through scapegoating and inhumane treatment of refugees, forcing gender studies programmes out of the country, and criminalising homelessness, this government has worked to silence the voices of the queer, the marginalised, and those who disagree.

This is part of a pattern of behaviour by the Orbán regime, promoting a model it describes as "illiberal democracy," that has created a hostile environment for alternative voices, many of which were already on the margins.

In response to this, and in solidarity/collaboration with local activists/artists, I will be using the prize money from my Governor General's Award to create a series of events—lectures, parties, screenings, performances, etc.—focused on the propagation of intersectional discourse around gender, sexuality, and democracy in Budapest. These events will aim to create temporary, autonomous spaces of queer kinship, safety, and liberation; supporting the longstanding, ongoing efforts of local artists and activists while also building bridges with international voices.

I feel as someone living in Budapest, who enjoys the privileges and protections granted to me by my Canadian citizenship, that this is the least I can do at this critical moment. To do nothing would feel, frankly, obscene. It also feels particularly fitting that I should be using money earned from these particular plays as they are, ultimately, about characters who stand up to ideological tyrannies that seek to destroy them.

I feel as someone living in Budapest, who enjoys the privileges and protections granted to me by my Canadian citizenship, that this is the least I can do at this critical moment. To do nothing would feel, frankly, obscene.

TC: In your opinion, what more needs to be done to ensure that Canada remains a vital, envied world leader in theatre? What’s your feeling about the current generation of theatre artists working in Canada?

JT: Perhaps most important is the need to ensure young people, of all income brackets and backgrounds, enjoy access to theatre throughout their scholastic lives. If we do not have a society that feels literate and invested in theatre from a young age, then theatre will only ever exist as a commodity for the elite, rather than a vital extension of our civil society. We create engaged citizens—as well as future artists and audiences—through ensuring funding and curricula support early, and hopefully life-long, engagement with the arts.

If we do not have a society that feels literate and invested in theatre from a young age, then theatre will only ever exist as a commodity for the elite, rather than a vital extension of our civil society.

I also think, when considering other national theatrical ecologies, that the cultural diversity of Canadian theatre is an incredible and unique asset. We must continue to work harder to nourish it.

I feel very lucky to be part of this exciting moment in Canadian theatre. The more I travel and work abroad, the prouder I am of what we are making here at home.

TC: 49th Shelf is built around a large community of readers and fans of Canadian literature. What Canadian authors are you reading these days?

The two books I most recently read, and adored, were Catherine Fatima’s Sludge Utopia and Jacob Wren’s Authenticity Is a Feeling — both works of auto-fiction published in 2018 by the indispensable Toronto press Book*hug.

Lights rise on EDITH.
She stands still, facing the audience. She does not move from her position for the entire play. Indeed, she has no movement whatsoever.

What an impertinent woman
Feeble-minded
Meek of heart
Or perhaps it’s meek of spirit or some bullshit like that
Wasn’t she told to run and not look back?
Why didn’t she do what she was told?
I admit, I’ve never been much good at that

But really, what do they know?
The men who wrote the accounts
They weren’t even there the day it happened
Do they even know it was a Sunday?
I bet not
I bet the day of the week never even crossed their minds
Or that there were people just going about their lives

That Sunday I did the wash, like I always do
In the village there is a basin where the women gather and gossip
We know all of each other’s dirty laundry
I always have to be discreet because my husband Lot
is rather old and incontinent and leaves little surprises for me in his underwear
The other women always pretend not to notice but I know they do

I also wash my daughter Sahrah’s bras and her baby girls’ diapers
and also the diapers of dear old Nanna, Lot’s mother, deaf and blind as a
doorknob

My right hand is my ass-wiping hand
It also happens to be the hand I wear my wedding ring on
Once, while I was wiping Nanna’s ass
I noticed that the small diamond in the ring had fallen out
Then, a week or so later, while we were eating dinner, she started to choke
I slapped her on the back and she coughed up the diamond
The village declared it a miracle from God and held a feast in her honour
Who was I to rain on the parade?