These STEM books will inspire young readers to take their curiosity to the next level.

Secret Coders, by Gene Luen Yang and Canadian illustrator, Mike Holmes, is a unique graphic novel. Hopper doesn’t fit in at her new school until she befriends Eni who teaches her (and the reader) how to read binary code using coins and a piece of chalk. When the two discover a turtle robot, Eni shows Hopper how to use the old programming language Logo to move it. Sometimes they write the wrong number of steps or send the turtle in the wrong direction and have to try again, a great STEM lesson. Progressively harder coding challenges are presented to the reader: “Can you figure it out?” By the sixth book, the reader is writing code to help save the world and find Hopper’s long-lost dad, and working the tasks is a step-by-step tutorial in programming! There’s also a website with videos that do the same. (Grade 4+) 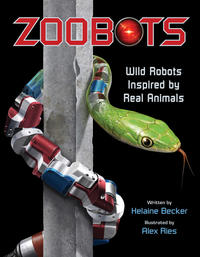 Zoobots, by Helaine Becker, illustrated by Alex Ries, could prompt an excellent design challenge. What real-world problem might be solved by a robot inspired by a natural creature? What about a shrewbot-like bomb sniffer, a snake-like robot to detect earthquake victims, and an octopus-like robot that performs delicate surgical procedures? Mechatronics (mechanical and electrical engineering combined with computer science) are behind these real-life zoobot prototypes, many of which are either in development or working today. (Grade 4+) 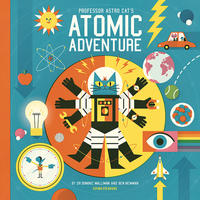 Professor Astro Cat’s Atomic Adventure, by Dr. Dominic Walliman, illustrated by Ben Newman, is large in size with memorable illustrations making this a great readaloud and teaching tool. Guide/host Astro Cat explains all things physics, beginning with atoms; for example, Greek philosopher, Democritus, asked, what happens if you cut a piece of cheese smaller and smaller? Eventually you get an “atomos,” a single unit that is indivisible. Astro Cat then moves on to explain molecules, floating/sinking, forces, Newton’s laws, energy, magnetism, electricity, sound, and light, as well as how math, measurement, and formulae fit into our understanding of the universe. These are vast concepts made simple. (Grade 3+) 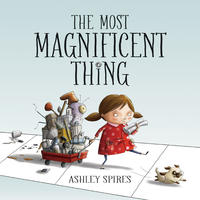 No STEM book list is complete without Ashley Spires’ The Most Magnificent Thing. Dedicated to “all the little perfectionists of the world,” it speaks to inquiry and resiliency. The little girl loves making and un-making things, experiencing the typical engineering stages: drawing a plan, gathering supplies, evaluating, adjusting ... and exploding with frustration. A walk around the block is the answer. (Kindergarten+) 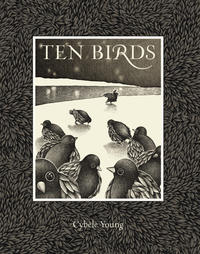 Ten Birds, by Cybele Young, is a book that also lends itself to launching STEM projects. Ten birds are faced with the task of crossing a river, using such tools as pulleys, air fans, catapults. Large detailed wood-block-style illustrations, along with Young’s cryptic language, invite the reader to figure out how each bird will get across. (Kindergarten+) 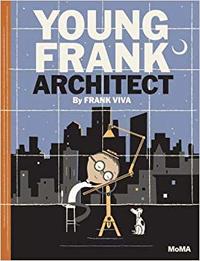 Young Frank, Architect, by Frank Viva, is a picture book that can also inspire young builders to use found objects. Young Frank loves to design chairs, buildings, and whole cities out of books, toilet paper rolls, and found objects. After a visit to the Museum of Modern Art with old Frank, the two of them collaborate on even loftier creations. (Kindergarten+) 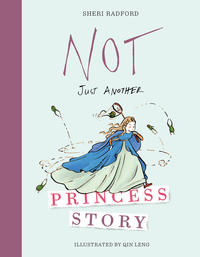 Not Just Another Princess Story, by Sheri Radford, illustrated by Qin Leng, is a lengthy picture book that doesn’t take itself too seriously. Thanks to a wizard’s spell, Princess (and math-enthusiast) Candi has an eternally silly father and a pickle for a mother. The king decides it’s time for her to marry, but she can find her own prince. Candi employs the usual fairy tale solutions—slaying-the-dragon challenge, kissing a frog, poison-induced sleep, but all lead to dead-ends. She finds the wizard and challenges him to a mathematical dual, which she, of course, wins. After going to school, meets a boy who likes math AND can balance a spoon on his nose—pure chemistry! (Grade 3+) 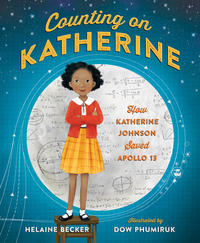 Counting on Katherine: How Katherine Johnson Saved Apollo 13, is another inspirational picture book about a girl in the STEM world. Written by Helaine Becker, illustrated by Dow Phumiruk, it’s the true story of a NASA aerospace technologist and her early beginnings as a gifted math student. Her calculations were so reliable that John Glenn bypassed the computer-generated numbers to ask if it passed "the Katherine test." When Apollo 13 exploded, three astronauts awaited their fate in outer space while Katherine calculated a safe flightpath home. (Kindergarten+) 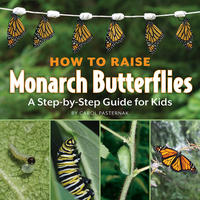 On the maker side, How to Raise Monarch Butterflies: A Step-by-Step Guide for Kids, by Carol Pasternak, would work as a teacher-led 4-week classroom project, beginning with the first neighbourhood sighting of monarchs. It shows how to find monarch eggs on milkweed leaves, how to make a nursery using plastic containers and paper towel, and how to photograph and release the monarchs. There’s a bit on migration (50 million butterflies en-route to Mexico!), how to create a butterfly garden, and website addresses for further research. (Kindergarten+) 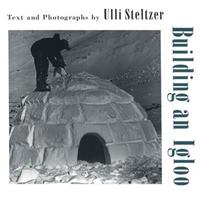 Building an Igloo, by Ulli Steltzer, is a classic, with black and white photos illustrating Northern hunters constructing an igloo. Tookilkee and his son find the right snow, cut it with a saw, lay the large rectangles in spiral formation, and add a chimney, window and porch. Its brilliance lies in its simplicity. (Kindergarten+)

Innovations in the world of robotics are multiplying, with many cutting-edge breakthroughs, and this exciting and timely new book for young readers explores one particularly intriguing area: the world of robo-animals, or zoobots. In an attempt to design robots that can solve problems or perform tasks that humans can't, or just can't do easily, robo …

Class is in session, and the subject is physics. Your teacher? Why, he’s the smartest cat in the galaxy!

In this brilliant follow up to Professor Astro Cat’s Frontiers of Space, our trusty feline returns to take you on a journey through the incredible world of physics. Learn about energy, power and the building blocks of you, me and the universe …

Most Magnificent Thing, The

Award-winning author and illustrator Ashley Spires has created a charming picture book about an unnamed girl and her very best friend, who happens to be a dog. The girl has a wonderful idea. “She is going to make the most MAGNIFICENT thing! She knows just how it will look. She knows just how it will work. All she has to do is make it, and she mak …

A clever counting book and fable unlike any other and winner of the 2011 Governor General's Award for Illustration.

Not Just Another Princess Story

After the king declares it’s time for Princess Candi to get married, the math-loving princess decides to carry out a husband search on her own. Not knowing how to find such a creature, she turns to fairy tales for inspiration and ends up using every method in the books, from kissing frogs to slaying monsters. But will she find her Prince Charming …

The bold story of Katherine Johnson, an African-American mathematician who worked for NASA during the space race and was depicted in the filmHidden Figures.
You've likely heard of the historic Apollo 13 moon landing. But do you know about the mathematical genius who made sure that Apollo 13 returned safely home?
As a child, Katherine Johnson loved …

How to Raise Monarch Butterflies

A Step-by-Step Guide for Kids

"The breezy and down-to-earth text ... nicely communicates the wonder ... Especially effective is the eight-pictured depiction of the development of the caterpillar into a chrysalis."
--School Library Journal