Like so many teens growing up in Canada, I was desperate to see myself in Young Adult fiction. Sure, I found plenty of novels about American teens, and while I could relate to those characters well enough, where were all the books about Canadians? We’re not quite exotic enough to be exciting, but with our toques, loonies, legal drinking ages, and all those pesky ‘u’s in words like colour, we’re just different enough to be confusing. As I continued to grow and read, I discovered that not only do Canadian books exist, they’re also pretty awesome. In the words of fellow author Anna Priemaza, “As a reader, discovering our beautiful country featured in a book is such a rare and magical moment of 'Oh, hi, it's us!' and it thrills me to now be able to create that moment for other Canadian readers.”

While these YA novels stretch from Vancouver’s Main Street to the small town of Palermo, Ontario, what brings them together are the unforgettable voices of each honest, unique, and unabashedly Canadian character.

Kat and Meg Conquer the World, by Anna Priemaza

"Even me?" Meg asks, which could mean she's a mind reader, but probably just means I accidentally said that out loud.

And something about the way she grins at that makes me feel the tiniest bit better.

Kat and Meg Conquer the World centres on the unlikely friendship between two very different girls in Edmonton. Kat is an introvert with anxiety. Meg has ADHD, and talks faster than Kat can think. Both girls bond over their favourite online gamer, LumberLegs, and their love of junk food (Anna Priemaza told me that Kat and Meg originally ate dill pickle chips and Aeros, but that those foods were deemed too "Canadian" and were replaced with salt and vinegar chips and Rolos). Video games, fan culture, mental illness, challenging family dynamics, school projects, and first love are all told through the refreshing and honest narration of both girls. I can’t say how much I love that female friendship lies at the heart of the story, Kat and Meg Conquer the World is one of those books that is impossible to read without a huge grin on your face.

Alice, I Think, by Susan Juby

I’m already in the late stages of advanced detachment where my mother is concerned. With a little practice I could feel that way about everyone.

After years of being homeschooled in the small town of Smithers, BC, fifteen-year-old Alice MacLeod is ready to start public high school. Uncertain if her hippie parents have adequately equipped her to navigate the world outside her home (or if her former therapist did indeed have a meltdown on her account), Alice takes matters into her own hands. Thanks to her Life Goals List—including a whole new look (with help from the local thrift store and a rather alternative cousin), social interaction outside of her family, a job, and a boyfriend—Alice might just have a shot at a well-adjusted teenagehood. Until, of course, her mom picks a fight with the school bully in a parking lot. Alice’s wry journal (which, I admit, was hugely inspiring for Nice Try, Jane Sinner), details the odd, painful, embarrassing, and downright hilarious efforts of one girl’s quest for independence.

We Are All Made of Molecules, by Susin Nielsen

I got into my pajamas and crawled into bed, pulling the other afghan on top of me. Schrödinger lay down right by my head, just like he’d done at home.

I mean, the place where I used to live until today.

When 13-year-old Stewart and his Dad move in with Caroline—his Dad’s new girlfriend—and her daughter Ashley, Stewart is confident he can make the best of things. Sure, he misses his mom (who died of cancer two years ago), and maybe there aren’t as many quality people at his new school as he’d hoped, but at least he still has his cat, Schrödinger (or Shoe Box, or Shopping Cart.. Ashely can never seem to remember which). Ashley, on the other hand, is still reeling from her parent’s separation, and life as a popular girl at school doesn’t leave much time for her new step brother (not that she’d ever call him that in public). Conversational, hilarious, and unflinchingly honest, We Are All Made of Molecules breaks your heart then sews it back up with Stewart’s infectious optimism.

The Scorpion Rules, by Erin Bow

Which leads us to Talis's first rule for stopping wars:make it personal.

And that, my dear children.Thatis where you come in.

Greta Gustafsen Stuart, Duchess of Halifax and Crown Princess of the Pan Polar Confederacy, is held hostage—along with other children of world leaders—until her 18 birthday, in hopes of securing peace between nations. When an unexpected and unruly hostage shows up at the Precepture, Greta begins to question the system that demands she give up her own life to save others. A natural born leader, Greta rallies her fellow hostages to save them all from their so-called benevolent AI captors. While Greta is a compelling character placed in an impossible situation, the villain—the strangely charming AI overlord Talis—is even more delightful to read about. Set in near-future Saskatchewan, The Scorpion Rules is a thoroughly fresh and thought-provoking dystopia.

Exit, Pursued by a Bear, by E. K. Johnston

I keep my eyes closed and my sleeping bag tight under my chin. Will I ever have it this good again? I will wake up somewhere new this time next year. I have only a few more mornings in this world, in this world that loves me for what I love and for what I am good at.

Hermione Winters, a dedicated athlete and co-captain of the cheerleading team, is determined to make her last summer at a cheer camp in Ontario everything it can be. She isn’t going to let anything hold her down—not her rigorous schedule, the judgmental assumptions of others, or her jealous boyfriend. Her enthusiasm, leadership, and passion are infectious; it’s impossible not to root for Hermione as she leads her team to nationals. When she’s drugged and raped on the last night of camp, Hermione is left reeling, unsure who to trust. Her road to recovery is heartbreaking, but Hermione’s refusal to let what happened that evening destroy her passion for her sport (along with one of the most stunning covers I’ve ever seen) make Exit, Pursued by a Bear a story that will haunt readers long after the final page.

"Jane Sinner snarked her way into my heart, and she's never leaving. Prepare to fall hard for this hilarious, heartfelt gem of a book."—Becky Albertalli, author ofSimon vs. The Homo Sapiens Agenda

Susan Juby’s acclaimed first novel is now available in an edition that’s all grown up. After years of home schooling, it’s time for Alice MacLeod to act her age, meet new people, maybe even go to regular high school. Soon Alice is on the hunt for a look, a social life, a boyfriend and, most important, a half-decent haircut. But getting any of … 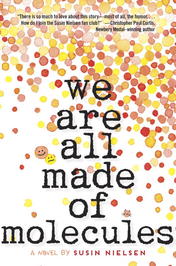 The children of world leaders are held hostage in an attempt to keep the peace in this “slyly humorous, starkly thought-provoking” (Kirkus Reviews, starred review) novel.

Greta is a Duchess and a Crown Princess. She is also a Child of Peace, a hostage held by the de facto ruler of the world, the great Artificial Intelligence, Talis. This is how …