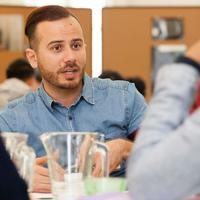 We begin The Chat in 2018 with a conversation with Ahmad Danny Ramadan, author of the stirring debut novel The Clothesline Swing (Nightwood Editions). A journey through the aftermath of the Arab Spring, The Clothesline Swing is “an enthralling tale of courage that weaves through the mountains of Syria, the valleys of Lebanon, the encircling seas of Turkey, the heat of Egypt and finally, the hope of a new home in Canada.”

Writing in Quill & Quire, Kamal Al-Solaylee says, “This debut novel from the Vancouver-based Syrian writer reads as many things—a coming-out memoir, a history lesson, a critique of authoritarianism, a narrative about sharing narratives—but above all, it’s a requiem for a dying country and people.”

Ahmad Danny Ramadan is a Syrian-born author, storyteller, and LGBTQ-refugees activist who calls Canada home. His debut novel is The Clothesline Swing. He also translated Rafi Badawi's 1000 Lashes: Because I Say What I Think, and published two collections of short stories in Arabic. His work in activism has supported the arrival of over 18 Syrian queer refugees to Canada and his advocacy has helped shape the queer community in Vancouver into a sanctuary community for queer refugees. He was the Grand Marshal for the Vancouver Pride Parade 2016 and was named among the Top 25 Immigrant Awards 2017. Ramadan has lived in Vancouver since his arrival to Canada in 2014 and currently works at the Greater Vancouver Food Bank.

THE CHAT WITH AHMAD DANNY RAMADAN

Trevor Corkum: This is your first novel in English, after publishing two collections of short stories in Arabic. How does it feel to have this particular book out in the world? What challenges did you encounter writing in a new language?

Ahmad Danny Ramadan: I have worked on The Clothesline Swing for over four years while going through the experience of being a queer refugee, arriving here to Canada and finding a space for myself in the Vancouver community. I feel that this book is crowning that journey and is in a way the finale; closing one chapter in my life and opening up another. What was important to me when I published this book is not to only showcase the experience of refugees, but to also demonstrate that I’m a good storyteller and a worthy novelist, and I believe I managed to hit that balance.

Writing in your second language is quite challenging; self-doubt was always around the corner, and I was worried what made sense to me might not make sense to those reading. It turned out to be a good thing, though. My voice and my style of writing was praised for being unique, I honestly believe it’s just the way my Arab head is processing the English language.

TC: The structure of The Clothesline Swing is entirely unique, moving between traditional storytelling, war reportage, and first-person memories of life in Syria, Egypt, Lebanon and elsewhere. What inspired you to structure the novel this way?

ADR: I took my inspiration from my lived experiences: firstly, traditional Syrian storytelling styles; magic realism is always present in our heritage, and I wanted to be truthful to that. I used to be a war reporter back in the Middle East covering the Arab Spring conflicts, which tuned my language a bit, but also I wanted to tell a humane, truthful, heartfelt story that balances this and that. I also find the linear style of writing to be traditional and—quite frankly—boring.

I took my inspiration from my lived experiences: firstly, traditional Syrian storytelling styles; magic realism is always present in our heritage, and I wanted to be truthful to that.

TC: The book details so many gripping, heartbreaking moments—devastation from war, deaths of family and close friends, physical violence—but at is heart is a precious love between two men. Can you talk more about this balance between trauma and healing in the novel?

ADR: I believe trauma deserves to be celebrated for what it does to the human spirit, I think it changes you in ways unmatched to any other lived experience. Dealing with past trauma requires you to look at the positives that this experience left you with. There is no place for victimizing my characters because of their traumas, but surely there is a place to look at their shattered beauty; their perfect imperfections; and their ability to love more, to see the world better, to break out of tradition and be something bigger and to share that world with us through their stories.

TC: Apart from writing, you’ve been active as an advocate for LGBTQ refugees and as a noted public speaker. You were also the grand marshal for the Vancouver Pride Parade in 2016. What has it been like for you to take on this more public role? How do you balance your advocacy work and other commitments with writing?

ADR: I never intended to be a public figure and never wanted my work advocating for LGBTQ-refugees to be seen as this great accomplishment. For me, those folks are my people, my friends that I spent my life with back in the Middle East, and it made no sense to me that I have made it here and they didn’t, so I started working to support them.

For me, those folks are my people, my friends that I spent my life with back in the Middle East, and it made no sense to me that I have made it here and they didn’t, so I started working to support them.

I’m hoping that one day I will become a full-time author; but until that beautiful day shows its dawn, I just have to continue to clone myself (or easier—never knowing what weekends are). I also am quite lucky to have a partner who is supportive of both of my career as an author and my commitments as a public speaker and activist and my full time job. Matthew puts up a lot with me—that poor soul.

TC: What projects are you working on now, Danny? What can we look forward to reading from you in future?

ADR: A working title of The Foghorn is in the works; I have the characters and the stories, and I wrote the first chapter already. There will be magical realism, there will be scenes sit in Damascus, and there will be some more unreliable narrators. Stay tuned.

Excerpt from The Clothesline Swing

I was born in my grandfather’s house in Damascus. My father was nineteen and my mother was seventeen. He heard my mother’s scream, he heard a short, snappy cry and saw the midwife leave the room holding a blanket covering a red being that made vague gestures with its hands. “Pray in his ear,” the midwife whispered. “Kabber in his ear.” My father—young, silly, unaware of what awaited him—held my body and whispered in my ear, “Allahuakbar, Allah is great.”

In the mid-eighties, you would only hear those Allahuakbars spoken outside of mosques when a baby was born or when they were screamed out loud as a sign of total astonishment. For example, when my uncles watched a football match on the old, staticky TV, they would throw things in the air and scream “Allahuakbar!” when their favourite team scored. The next morning, one of them would be sitting with friends who had seen the same match, smoking arjileh under the white neon lights of a café in old Damascus. They would be drinking tea and my uncle would be telling his friends about the goal they had all seen the night before. “We weren’t sure that we would make it, ya zalameh,” he would say. “Suddenly, Allahuakbar! We won!”

The meaning of words changes with time: thirty years later, Allahuakbar scares the world and injects fear into the hearts of millions. Dark-featured fighters carrying long swords were beheading people while screaming Allahuakbar with the same amusement my uncles felt for their football matches.

“I remember a Ramadan night I spent in my grandfather’s house,” I tell you. The four, maybe five-year-old me was trying to be helpful by spreading the plates on the table. My grandfather, who happened to distrust TV iftar announcements, was listening for the deeper voice of the Umayyad Mosque’s muezzin on the official Damascus radio station. He always called the sunset prayer two minutes too late.

I remember the laughter of Ramadan as we gathered around the iftar table. We always prayed together first. “O my Allah, for thee I fast, and with the food thou givest me I break the fast, and I rely on thee,” my grandfather said, and we all replied with a loud, deep amen. “In the name of Allah, the beneficent, the merciful, O he whose indulgence is boundless, forgive me,” he added, and we repeated it behind him. Once I tried to speak it too fast. I was hungry and ready to devour the feast in front of me. I reached out for a piece of bread, and I was faced by an angry look from my grandfather, so I retreated my sinful hand back.

My mother, a happy-go-lucky twenty-something-year old back then, was more supportive than my grandfather about fasting. “You’re too young to fast throughout the day,” she told me. “You can take the minaret stairs toward fasting.” It was an easy system for children to get used to fasting. I fasted until the noon prayer for a couple of days, and then challenged myself to fast until the afternoon prayer. By the last week of Ramadan I was fasting like the grown-ups, until the sunset prayer was called. I felt proud of myself. During my shorter days of fasting, my mother relied on me to be the decision-maker on the taste of the food. She called my name and I came running to the kitchen, where she and two or three other women were gathered.

“Taste this,” she said, stuffing a spoon full of hot soup into my mouth. “Does it need more salt?” I personally hated salt; she loved it.

“No. It’s perfect,” I said, enjoying the hot taste burning the tip of my tongue.

“Great,” she said, adding more salt to the soup.

Reprinted with permission of the author.