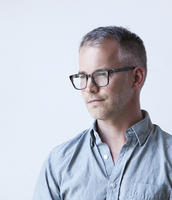 On the heels of Michael Harris’s The End of Absence comes Solitude, an exploration of what it means to be alone in a world constantly demanding our attention. We’re in conversation with Michael this week on The Chat.

Grant Munroe, writing in The Globe and Mail, calls Solitude “an insightful, lively meditation on why this increasingly scarce component of our lives should be preserved.” Douglas Coupland says, "I came away from this book a better human being. Michael Harris's take on existence is calm, unique and makes one's soul feel good, yet never once does he rely on feel-good techniques."

Michael Harris is the author of The End of Absence, which won the Governor General's Literary Award and became a national bestseller. He writes about media, civil liberties, and the arts for dozens of publications, including The Washington Post, Wired, Salon, The Huffington Post and The Globe and Mail. His work has been a finalist for the RBC Taylor Prize, the BC National Award for Canadian Non-Fiction, the Chautauqua Prize, the CBC Bookie Awards and several National Magazine Awards. He lives in Vancouver with his partner, the artist Kenny Park.

THE CHAT WITH MICHAEL HARRIS

Trevor Corkum: Solitude is your follow-up to the Governor General’s Award-winning The End of Absence. How did the project come together?

Michael Harris: My partner and I had just moved to Toronto when I started thinking about Solitude. The End of Absence was months away from publication and Kenny was away at work every day—so I was alone. Very alone. I would sit in cafés or read in parks and I just got painfully lonely down in my marrow. I think I started writing about solitude as a way to improve my own state of mind.

TC: How do you define solitude? What does it mean to you personally?

MH: Solitude is the productive and contended experience of being alone. (Loneliness, by contrast, is failed solitude.) What does it mean to me? Sanity. Health. Endurance. A person who knows how to be on their own has the opportunity to build a rich interior life. And once you’ve got that, you’re free in a way, aren’t you? If you really have that rich interior life, you carry it with you, and you’ve always got a home in your chest.

TC: Reading the work, I was reminded of the visceral terror so many folks experience spending time alone, untethered from their devices. You mention throughout the book that this ability for spacious, unaccounted-for time alone with ourselves is under real threat. What’s at stake in this loss? And is it possible for us to pull back?

MH: I think you can divide what’s at stake into three camps. First, without solitude you miss out on really fresh thinking (you can’t have a paradigm-shifting idea at a conference table). Second, you aren’t going to have a clear idea of what you personally love and believe, as opposed to the crowd’s loves and beliefs. Third, without solitude it’s harder to really have faith in the relationships in your life.

Without solitude you miss out on really fresh thinking (you can’t have a paradigm-shifting idea at a conference table).

Ru Paul says it best: “If you can’t love yourself, how the hell you gonna love somebody else?”

Is it possible for us to pull back? Sure. Folks who want to lose weight often find the strength to change their intake, their diet; similarly, people who are socially obese (obsessed with digital connections, etc.) always have the opportunity to start fashioning a healthier media diet for themselves. But, in both cases, it’s a daily practice. And it requires constant upkeep. There’s no magic pill.

TC: You explore various kinds of solitude—inside our bodies, in nature, in the minefield of love. One of the themes you don’t really touch on, however, is how in this age of reason, many folks have abandoned spirituality. I’m not talking organized religion, simply a sense that our lives have a deeper meaning, that we’re connected to something larger and more profound than what we can measure or articulate. You come close to this in the final chapter, when you spend a week alone, confronting your own solitude. But you avoid unpacking or exploring any explicit spiritual notion of our human experience. Can you talk about this a little more? Was this a conscious decision?

MH: Sharp eye, Mr. Corkum. It was very much a conscious decision. There was actually a bit of religious reading that went into my research but I didn’t open that can of worms for a couple reasons: first, I’m a heathen and don’t feel like I have any footing when it comes to religious discussions; second, attitudes towards religion are so fraught and polarizing that throwing in, say, a casual reference to Christian monastic traditions can really trip people up. That said: I’ve been surprised to hear about religious connections people are making.

TC: I’m reading Yuval Noah Hariri’s Homo Deus right now (which you quote in your book), about the possible future trajectory of Homo sapiens. Depending on your perspective, it’s either liberating or terrifying, a vision of a world where humans may re-engineer ourselves into a whole new godlike species. Are you optimistic about the future?

MH: Tech is now at a point where our culture seems to evolve independent of human intention, so it’s hard for me to believe that any of our predictions count for much. I have this theory that whenever somebody makes a grand pronouncement about the future, they’re actually just describing the state of their sex life. Having now explained my theory, it would be obscene for me to answer your question.

I have this theory that whenever somebody makes a grand pronouncement about the future, they’re actually just describing the state of their sex life.