Dr. Edith Vane and the Hares of Crawley Hall, by Suzette Mayr

"...it was definitely a surprise when I figured out I'd internalized and then reproduced names from the television show Downton Abbey in my new novel without realizing it. I'd deliberately chosen the name "Crawley Hall" as the name of the main building, but only because I liked the sound of "crawl." But then only very late in the writing process I realized I'd also used the names Edith and Carson, and I'm pretty sure there are other Downton Abbey influences in there that I haven't recognized yet. That show irritates me so much: I hate it, but I love it. I can't believe it infiltrated my brain like that. I also accidentally copped from Alice in Wonderland without realizing it too: I have a character in my new book who wears a Cheshire Cat watch, and somehow two characters both named Alice, and jackrabbits and an obsession with time. Clearly I don't have a single original thought in my head."

Turning Parliament Inside Out, edited by Michael Chong, Scott Simms and Kennedy Stewart

Referenced in Susan Delacourt's Toronto Star column, "When Political Parties Get a Little Out of Hand":

"The book is a series of essays from MPs representing four of the parties in the Commons and pulled together by Conservative leadership candidate Michael Chong, Liberal MP Scott Simms and New Democrat MP Kennedy Stewart. Green party Leader Elizabeth May lent her voice to the project, too, appearing on CBC Radio’s The Current this week with the three editors to help promote the book.

To kick off that radio interview, host Anna Maria Tremonti asked all four MPs to identify the main problem with political culture in Canada right now. Every single MP said a version of the same thing: that political parties, and the leadership of political parties, exert far too much control over what happens on Parliament Hill."

"The next log­i­cal choice for George Elliott Clarke’s poet­ry col­lec­tions asso­ci­at­ed with colour (there was Blue, Black, then Red), was Gold. The book brims with the musi­cal and learned force we’ve come to expect while man­ag­ing to feel like a sun­set, cast­ing a glow and shad­ow over his sem­i­nal works. The gold sleeve cov­er­ing the cov­er, and cov­ered with the chem­i­cal sym­bol, 'Au'” is a phys­i­cal man­i­fes­ta­tion of his belief, and open­ing quote, that, 'Beauty…is the sole busi­ness of poet­ry.'"

"In Sylvia Gunnery’s novel Road Signs That Say West, Hanna persuades her younger sisters, Megan and Claire, to join her on a parent-free road trip across Canada. As each girl deals with her own set of problems—past, present, and future—the sisters learn more about themselves, about the lives and problems of others, and about the importance of letting go and moving forward. Between crashing a wedding, hitting a dance club (and an ER), helping a hitchhiker paint a house, and learning to trust their instincts about dangerous people, the journey is not necessarily what they expected. With a cast of interesting yet believable characters, Road Signs That Say West gives a realistic look into the lives and relationships of three very different yet inextricably linked sisters." 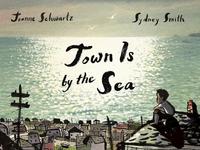 Town is By The Sea, by Joanne Schwartz and Sydney Smith

Reviewed by Sarah Ellis at The Horn Book:

"'From my house, I can see the sea. It goes like this—house, road, grassy cliff, sea. And town spreads out, this way and that.' There’s a distilled, haiku-like quality to this boy’s description of an ordinary summer day in a seaside coal mining town in the 1950s. As the boy moves through his day—swinging on the beat-up playground swing set, eating a baloney sandwich, visiting his grandfather’s grave, listening to the radio, watching the sun set—the focus shifts among three locations: home, the ocean, and the mine deep underground where the boy’s father is working. 'And deep down under that sea, my father is digging for coal.' The sea is made of light, the mine of darkness; and home is a mixture."

Dr. Edith Vane and the Hares of Crawley Hall

Dr. Edith Vane, scholar of English literature, is contentedly ensconced at the University of Inivea. Her dissertation on pioneer housewife memoirist Beulah Crump-Withers is about to be published, and her job's finally safe, if she only can fill out her AAO properly. She's a little anxious, but a new floral blouse and her therapist's repeated assura …

Turning Parliament Inside Out

For years, the prospect of parliamentary reform has been a hot-button issue in Canada. More and more Canadians find themselves frustrated with how Parliament works (or doesn't) and end up increasingly checked out from politics as a whole, feeling like their voices don't matter to those in power.

The poems in Gold glitter. From the lush, unrestrained and unabashed tumble and thrust of his sensual lyrics (vivid expressions of love and lust which brook no admonishment) to the measured and stately resonance of his eulogies for community organizers, tributes to leaders and laureates, and contemplations on the principles for good governance, Geo …

Left to house sit one summer while their parents are in Europe, three sisters set out on a cross-Canada road trip instead. Through near disasters, new acquaintances, and the revelation of close-kept secrets, the sisters' ties are by turns tested and strengthened.

It's Hanna's wild idea, of course: take their mom's car, pack up the tent, and drive ac …

Town Is by the Sea

Winner of CILIP Kate Greenaway Medal
Winner of the TD Canadian Children’s Literature Award
A young boy wakes up to the sound of the sea, visits his grandfather’s grave after lunch and comes home to a simple family dinner with his family, but all the while his mind strays to his father digging for coal deep down under the sea. Stunning illustr …