We start off May in conversation with Catherine Hernandez, a multi-genre artist whose savvy debut novel Scarborough (Arsenal Pulp Press) has been generating lots of buzz.

In praising the book, writer Vivek Shraya says, “Scarborough showcases a necessary shift from the singular voice novel to create space for many voices to be heard—especially ones that are often forgotten. In her dexterous debut, Catherine Hernandez powerfully centres the margins by interlacing narratives that spotlight the beauty that thrives beyond the big city.” 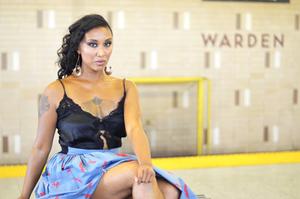 THE CHAT WITH CATHERINE HERNANDEZ

Trevor Corkum: This is your first novel, Catherine. How does it feel to have it out there in the world?

Catherine Hernandez: Having been a playwright for so long, I must say, writing fiction instead of writing a play was delightfully satisfying. It meant being able to write in complete solitude without having to find the funds to workshop the text alongside actors and a dramaturg. I could write it anywhere, I could write it despite being severely ill, I could write it in partnership with my editor, Robyn So, despite never sharing physical space.

Also, what I found so deliciously selfish was authoring this story without having designers or directors putting their stamp on my work. I myself dictated the focus of the narrative, told the reader where to look, what to see, what to feel, all through the crafting of words. But there was a price to pay for this. In theatre, your actors are always giving performative feedback, which fuels the next draft. Writing fiction meant creating a world with characters to inhabit it, all within a lonely silo. While solitude is lovely, I spent nights wondering if the book would actually resonate with people. Now that it is out, now that I can feel the weight of the book in my hands, I can finally find out.

While solitude is lovely, I spent nights wondering if the book would actually resonate with people. Now that it is out, now that I can feel the weight of the book in my hands, I can finally find out.

TC: The novel focuses on a diverse ensemble cast of characters in the Kingston/Galloway neighbourhood of Scarborough. How much research was involved, and what was that process like for you?

CH: I’ve lived in Scarborough on and off since I was ten. I am a resident there now. So my research is lived experience and I thank the generous community around me for inspiring me. I just closed my home daycare, which I operated in Scarborough for six years. During that time, I spent a lot of it observing and listening to people’s stories of survival and resilience. You meet a lot of parents and fellow caregivers that way. And most of them want to share their struggles and challenges with you. Respecting their privacy, I saw their stories as a springboard for the characters and narrative arc of the novel.

None of the voices from the book are fully based on actual folks I encountered. For me, it’s important to know that the universe is having you cross paths with this story source simply for inspiration. From there, it’s your job to let fictional characters breathe their own breath and walk their own walk.

TC: One of the incredible feats of the book is the vividness and richness of each individual voice. We meet characters young and old, across lines of gender, race, sexual orientation, and other identity markers. Which character was most difficult to portray, and who were you able to access and write the easiest? Any advice for writers hoping to write characters whose lives are quite different from their own?

CH: This is where my theatre skills helped me a great deal. Character creation is 99% of your work when writing a play, so breathing life into a person who doesn’t exist was not difficult for me. It actually starts with breath.

Character creation is 99% of your work when writing a play, so breathing life into a person who doesn’t exist was not difficult for me. It actually starts with breath.

When [you] perform, be it a live character or a puppet, you actually breathe as the character. Based on their history you can ask yourself: Are they out of breath? Is their breathing shallow? Is their breathing steady? And why? While this may seem a bit granola, the truth is, this forces your ego to step aside (with all its scientific nonsense based on facts) and allows your intuition/impulses to step forward. And while theatre practitioners would then begin to physicalize their discoveries onstage, I as a writer would then type their dialogue out.

You see, oftentimes as writers, we are so much in our heads trying to sketch out a character based on intellectual facts. When we allow breath to take over, it is pure impulse. Characters speak for you. You are just a conduit. What are they saying? Write it down. When writing a play, I often imagine the characters speaking to each other just a few feet in front of me. I pretend I am just documenting what they are saying. Then the work goes beyond you and your ego. The words already exist in the ether. You just have to catch them. Writing fiction, for me, is no different.

When we allow breath to take over, it is pure impulse. Characters speak for you. You are just a conduit. What are they saying? Write it down.

TC: What reaction to the book have you had so far from folks in Scarborough?

CH: The reaction has often been one of surprise. People in the ‘burbs are so accustomed to being the butt of every joke that to write fiction based on their experiences seems ludicrous to them. Once they process the fact that I indeed wrote a novel about Scarborough, then they feel excited.

I had a team of about ten folks from out this-a-ways look at the manuscript. The feedback was positive and helpful. They felt I captured what it feels like to live on the outskirts of a large city, what it feels like to be forgotten and second-best. But overall, they all felt respected in the portrayal of this area, and that was my number one priority.

TC: You’re a multi-genre artist and performer, and a Thinker-in-Residence at Buddies in Bad Times Theatre. What projects are you involved with currently? What’s next for you?

CH: Oh gosh. This list is long. Are you ready?

I am writing a new fiction novel called Crosshairs, which asks the question “What would happen if LGBTQ and racialized folks were to suddenly become militant against white supremacy and homophobia?” I might want to call it science fiction, although I am writing this only ten years into the future.

I have written a new children’s book called I Promise, which explores all the ways in which LGBTQ families all start with a beautiful commitment to children.

I am developing a new play about child soldiers called Library dramatizing two libraries in two different parts of the world, each of them helping children choose a book over a gun. I am heading to the Banff Playwrights Colony to write the next draft alongside my dramaturg, Beatriz Pizano.

I am now the Artistic Director of b current performing arts. I am very honoured to take the helm of this 26-year-old company dedicated to diverse theatre.

Excerpt from Scarborough, by Catherine Hernandez

I am standing just close enough to Mommy, until she begins to speak to me. I don’t understand what she’s saying, but I know better than to ask her to say it again.

She puts two plastic bags on the floor. She opens them up the way you open up socks so your foot can fit in. They look like two circles. I watch.

Mommy begins putting things into the circles. Whatever she can reach with her arms. Her hair is over her eyes, and I don’t know if she can even see what she’s reaching for. I want to help her, but I don’t know why she’s doing this.

I look up to the wall behind Mommy’s head, to see if I can picture his face in my mind, but I can’t remember it. I’m not sure if I’m excited. Maybe Daddy has snacks.

“Get all your things. We’re leaving.”

I see Mommy has packed a bag, too. I run to my Mama Duck paper cut-outs on the windowsill. I gather Mama Duck and all her ducklings into my hand and carefully walk to the two plastic bag circles.

Mommy slaps my hands, and I watch the yellow paper cut-outs fall to the floor.

“Not those. Stop it! Go get your clothes.”

I search the floor for my clothes. But all I can see are the yellow paper cut-outs of Mama Duck and her babies. What will they do without me? Mommy slaps the back of my head, and my cheeks get hot.

“Get your fucking clothes.”

I find my underwear in the hamper where I put it to get clean. I find my leggings under the kitchen table where I played house, then fell asleep. I find two shirts in the tub, where I rinsed them. They are still kind of damp. Mommy says there’s no time to dry them.

I put the clothes into the plastic bag circles. Mommy rolls them back out and up so they hold things. She points to my jacket. I place it upside down on the floor like I always do, because it’s easier to put on. I put my arms into the arm holes and flip it over my head. One, two, flipperoo. Mommy helps me with the zipper.

“Hurry the hell up.”

She takes the plastic bags and ties one to each of my wrists. She makes fists of my hands around the handles. She kneels in front of me and wipes her hair from her face so that I can see her eyes. I haven’t seen her eyes in a long time.

“Do not let go of these, got it?” I nod. “We have to be like little mice, Laura. When we leave, we have to whisper until we’re outside. You understand?” I nod. She gets her big bag and puts it on her shoulder. It looks heavy. Maybe Daddy is far away.

Mommy looks back into the apartment and turns off the lights. We open the door. Mommy puts her finger to her mouth to remind me to be quiet. We step over all the coloured paper that has been left outside our door. Mommy lifts her feet up and down softly, like she’s creeping up behind someone.

I see her reach into her pocket, and she pulls out a silver key. She places it on a table inside the apartment, then closes the door silently. Across the hall, Mrs Kamal opens her door. Mommy freezes.

Mrs Kamal looks at me, then looks at Mommy. They stare at each other for a long time. Mr Kamal calls from inside. Mrs Kamal says something back to him, then reaches for a pair of boots she left to dry in the hallway. I want to tell her so badly that I am going to see my daddy. That he is going to have snacks. And to tell her thank you. But Mrs Kamal is looking down at the boots in her hand, pretending she can’t see us.

We take the back stairwell down to the rear door. It is almost night. The wind rushes through the leaves of the trees, and it sounds like they’re clapping at me. Like the wind is saying something. I want to stay and listen, but Mommy brings my hood up over my ears.

Trailer for Scarborough: a novel from Legs Hernandez on Vimeo.