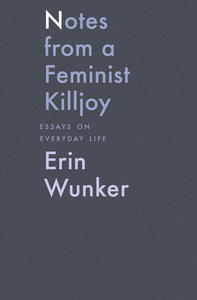 At 49th Shelf, we always make a thing of International Woman's Day—previous posts for the occasion include Everyday Is Malala Day, Read the 30 Women Who Ruled Canadian History, Angela Sterritt on The Legacy of Violence Against Indigenous Women in Canada, and Sally Armstrong on The Ascent of Women. But this year more than ever before, a day to challenge the system and raise up women feels incredibly necessary—and like not nearly enough.

And so to that end, we've enlisted Erin Wunker, author of Notes From a Feminist Killjoy, to recommend some essential reading for patriarchy smashing, works of poetry that are challenging in all senses of the word.

As my friend Tanis MacDonald has written, every time I talk about Canadian poetry I feel I am doing something radical. This is even more true when I talk about poetry written by women and women-identifying people writing in the context of Canada. The titles I’ve chosen are challenging. Indeed, they are challenging insofar as they shake at the structures of what is in service of what might be. They are, to me, hopeful without turning away from inequity and pain. They are radical in their enactments of gender politics and poetics. They are working to make us better readers, these books. They breathe life into my heart on my most tired days.

If you just glance at the cover of Forage you might mistake the photograph of kilometers of e-waste for an impressionist image of foliage. You might misread the patterned green of the back cover as leafiness, rather than a close-up of a circuit board. This collection of poetry pays attention to how and where our human looking settles. Rita Wong integrates an environmentalist’s concern with human impact on the earth, with an ally’s awareness of the politics of living and working on unceded Indigenous territories. This book asks that we look—that we search—for alternatives to the oppressive structures that hinder our ethical relatings with each other.

Men in the Off Hours, by Anne Carson

This collection opens with an essay on Virginia Woolf, Herodotus, and ordinary time. In it, Carson moves from the ancient to the modern, from a masculinized understanding of how time works, to one rooted in circular time and grounded in feminist poetics. Herodotus, the father of Western conceptions of history, plots time and progress as linear and forward-moving. Woolf, watching the war approach from her writing desk, figures time as a gender-ambiguous sentence waiting to rewrite how we understand the seconds that make up our lives.

Wanting in Arabic, by Trish Salah

The ghazal is an ancient form of poetry that traces its roots to Middle East. It is an old form—think seventh-century Arabia, for example. It’s a form whose lines interlock and echo the concerns of the previous line while pushing the questions and desires of the poet further. In Trish Salah’s collection the ghazal becomes an axis around which questions of gendered identity, belonging, desire, and home unfurl as they spin around one another. The poems are routes one might take to reach home in your own body, mind, history, and landscape. They vibrate with longing and tenderness.

Brief Reincarnation of a Girl, by Sue Goyette

How do we witness the ways that oppression is multiple? How do we attend to horror with an ethics of care? In this book Sue Goyette tells the true story of a four-year-old girl, whose parents were charged with her death. The girl died due to overdose of a combination of drugs prescribed for ADHAD and bipolar disorder. Goyette holds this tragedy in the lines of her poems. Poverty becomes a character. Power is personified. Loneliness and isolation, lack of networks of care, these affects people the cout room. Goyette refuses the scandalizing headline, working instead in the murky courtroom of community failures. Who will hold us if we don’t hold each other? Who will account for us if we can’t be accountable to one another?

She Tries Her Tongue, Her Silence Softly Breaks, by M. Nourbese Philip

“Discourse on the Logic of Language,” one of the central poems of this collection is several pages long and scattered all over the page. There are sections in all caps that require you turn the book on its head to read the lines. There are small sections called edicts, which make racist pronouncements in antiquated legal language. And there are italicized sections in which a mother, speaking to her newly-born child in language only they two understand, cleans it with her tongue. I have my students read this poem together. They have to work in groups, each assigned with a different section. How will you read it and why, I ask them. I’ve done this exercise more than ten times. Each time, as they work through the poem they learn from Philip the violence of not just colonial mentalities and patriarchal rape culture, they learn the violences of language.

The Invisibility Exhibit, by Sachiko Murakami

This book of poetry asks the reader to look for what is not there. Or, more accurately, it asks the reader to look for who isn’t there. Set in Vancouver and mainly in the Downtown Eastside, The Invisibility Exhibit asks: whose lives count? Whose bodies are grievable? Whose lives are worth saving? The poems are unflinching in their gaze, yet they rarely name the objects of their looking. “Missing Women” is a phrase that is never written in the collection, yet the absences of the hundreds of women, many of whom were Indigenous, who have gone missing, been murdered, or disappeared from the Downtown Eastside people these poems. Each poem enacts memorial and testament. Each poem burns with rage for those we’ve lost and the myriad ways we have failed them. Each poem demands that we do better.

Part ode to Nature and part lament for the modern condition Expressway’s poetics intersect formal and innovative techniques to lay bare the dangers of hurtling headlong into false freedoms, or remaining sedentary in the gridlock of passivity. Expressway’s poetics innovatively jams the traditional transmission of the lyric. As the poet notes, it is too late for simple solutions for saving ourselves, and the world, but if we are willing to innovate, there is much we can do to alter our course. This book is built on the crumbling foundations of modernity—speed and isolation are central—but in the margins and the medians, in the burnt-out husks of the abandoned cities there are women. Women with children strapped to their backs. Women with cellphones and resilience. Women who persist. Women with pickaxes unmaking the mess of modernity.

Erin Wunker teaches and researches in the fields of contemporary Canadian cultural production with a focus on feminist theory and experimental poetics. She’s the chair of the board of the national not-for-profit CWILA: Canadian Women in the Literary Arts (www.cwila.com) and co-founder and managing editor of the feminist academic blog Hook & Eye: Fast Feminism, Slow Academe (www.hookandeye.ca).

Notes from a Feminist Killjoy

Erin Wunker is a feminist killjoy, and she thinks you should be one, too.
Following in the tradition of Sara Ahmed (the or …

Rita Wong's new collection of poems explores how ecological crises relate to the injustices of our international political landscape. Querying the relations between writing and other forms of action, Wong seeks a shift in consciousness through poems t …

Men in the Off Hours

Anne Carson has been acclaimed by her peers as the most imaginative poet writing today. In a recent profile, The New York Times Magazine paid tribute to her amazing ability to combine the classical and the modern, the mundane and the surreal, in a body of work that is sure to endure. In Men in the Off Hours, Carson offers further proof of her tanta …

Wanting in Arabic is a refusal of convenient silences, convenient stories. The author dwells on the contradictions of a transsexual poetics, in its attendant disfigurations of lyric, ghazal, l'ecriture feminine, and, in particular, her own sexed voice. Without a memory of her father's la …

The Brief Reincarnation of a Girl

In 2006, a four-year-old Massachusetts girl died from prolonged exposure to a cocktail of drugs that a psychiatrist had prescribed to treat ADHD and bipolar disorder; her parents were convicted of her murder. In The Brief Reincarnation of a Girl, Sue Goyette strives to confront the senselessness of this story, answering logic’s failure to encompa …

These poems were written in the political and emotional wake of the “Missing Women” of Vancouver’s Downtown Eastside. Although women had been going missing from the neighbourhood since the late 1970s, police efforts were not coordinated into a full-scale investigation until the issue was given widespread public visibility by Lori Culbert, Lin …

Shortlisted for the Governor General's Award for Poetry