It’s as seasonally inevitable as the need for warm gloves and the appearance of twinkling lights: every year, as December hits, readers are inundated with a flood of lists, each proclaiming The Best Books of the Year. It seems like everyone gets in on the game: journalists, writers, celebrities, newspapers, magazines... Everyone, it seems, except those folks who know the books best, the booksellers.

Sure, you might occasionally find a Best Of list featuring a token bookseller, but they are largely overlooked. Which, as I have mentioned before, is ridiculous. Who better to be able to winnow the thousands of books published each year down to a list (or a single pick) than those people who spend their lives literally surrounded by books?

Of course, a lot of booksellers do provide lists, for their customers. They may not appear in the newspaper or in a magazine, but across the country there are table displays and printed sheets, featured shelves and, you guessed it, shelf talkers.

Which is terrific. A good independent bookseller is worth their weight in gold, an invaluable resource when it comes to your next great read, or in finding the perfect gift.

But geography has a sad role to play. It would be nearly impossible to visit every bookseller in this country (though if I had a bucket list, that would surely be on it).

Thankfully, you have the booksellers of the Shelf Talker community to turn to, a country’s worth of erudite, well-read bibliophiles who have, this month, provided their choices for the best books of 2016. There’s a little bit of everything here, something for everyone on your list and – dare I say it? – more than a few things for you.

It has, needless to say, been something of a terrible year. But even the worst of years have great books, and here they are, with a bow, a little gift, from us, to you.

The Pick: Do Not Say We Have Nothing, by Madeleine Thien

An epic novel told in an unusual way, a challenging read where you have to work to read it and pay close attention. But it is a rewarding read. Thien is an excellent storyteller; she perfectly balances music and silence, love and terror, intimacy and politics.

Do Not Say is an ambitious and witty novel, with intriguing characters and many layers, where intimate family issues and individual stories are intertwined with political and historical moments such as Mao’s revolution in the 50s and the Tiananmen protests in the 80s. In the end life, love and music will survive no matter what.

The Pick: Cocktails at Seven, Apocalypse at Eight, by Don Bassingthwaite

Whether it's fruitcake zombies, overly possessive sweaters, or the holiness of a hockey arena, Bassingthwaite can skewer any tradition with Derby Cavendish's dry martini wit. I'll be gifting this book to every reader on my list, whether they love the holidays, or love to hate them.

A collection of chapbooks that will delight Anne's fans, of both her poetry and her prose. This a beautifully put-together collection for dipping into at your leisure, whether you love her poetry, classical literature, or her experimental writing. A perfect gift for both Anne's loyal fans, and for anyone on your list who loves poetry, and damned fine writing.

Mysterious Fragrance of the Yellow Mountains, by Yasuko Thanh

Mysterious Fragrance of the Yellow Mountains refers to the small group of friends who seek revenge against the French for their treatment of the Vietnamese in the early 1900s in Saigon. Gorgeously written! Yasuko brings to the story her own family history of listening to the stories of her Vietnamese father and grandfather and her German mother, and her memories of difficult times in their lives. She writes with wonderful attention to detail, which brings this period alive, brings alive the pain and the suffering of the damaged who attempt to fight against the oppressors, and not always successfully.

The Bookseller: David Worsley, Words Worth Books (Waterloo, ON)

My heart is always with really good short story writers, simply because that's where the really precise writing comes from. Even the finest novels have some time of repose to them, whereas a short story demands attention from front to finish. That's why it’s a delight to savour Kerry Lee Powell's new offering; a finalist for the GG's and a standout work.

Right from the opening, "In a Kingdom Beneath the Sea," rough-hewn working class characters, the dispossessed or just plain angry characters who populate this evocative and enduring work, play against type and circumstance to mitigate some tough cards dealt to them.

Whether set in the solitary existence within a tough high school, a strip club, or chronicling teens cast into the drudgery of the working world, Powell has an ear for dialogue and a command of place across the board.

Reviews have quite rightly likened Powell to Alice Munro and it's wonderful to see a first collection (after an award-winning volume of poetry) promise so much.

The Bookseller: Shelley Macbeth of Blue Heron Books (Uxbridge, ON)

We're All in this Together, by Amy Jones

Absolutely LOVED this quirky family – think The Corrections, Canadian-style. By golly, they're from THUNDER BAY! And while everything about this book sounds like a comedy, the comedy is dark and shelters a beautiful and poignant story at its heart. Do yourself a favour. ... get to know the Parkers this Christmas.

With grace and passion Teva Harrison paints a genuine portrait (literally and figuratively) of living with terminal cancer. Without ever descending into a pity party, Teva's honesty and ability to share the truth strikes a chord with all who read her graphic memoir.

By Gaslight, by Steven Price
In a suspenseful detective drama spanning 19th century England and post Civil War America, Steven Price crafts at once a love story and a murder mystery. Compelling, brilliant and satisfyingly meaty at 800+ pages.

What Is Peace?, by Wallace Edwards

I have long been a fan of Wallace Edwards' illustrations. Gorgeous, complex, evocative. What is Peace uses simple text to explore deep philosophical questions.

Seven Crow Stories is bestselling author Robert J Wiersema’s first collection of short stories and the perfect book for this busy time of year. Wiersema populates his tales with instantly familiar characters and sets them in a world that is a quarter turn away from the reality that most of us live in, so readers never quite know what is lurking around the corner. Often dark but always with a sense of hope, Seven Crow Stories is the perfect escape on a cold winter night. 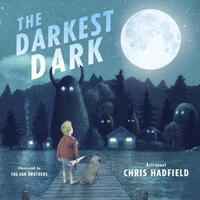 The Pick: The Darkest Dark, by Chris Hadfield, illustrated by The Fan Brothers

The Darkest Dark is a wonderful picture book written by the one and only Chris Hadfield. Inspired by Chris’s childhood it tells the story of young Chris, aspiring astronaut, who finds his room at the cottage a little too dark and scary at night. When watching the Apollo 11 landing at a neighbour’s cottage, he noticed that it was even darker around the moon and was inspired by the power and mystery of the dark universe and became the famous Canadian astronaut that we all know and love. The Fan Brothers’ illustrations beautifully compliment the story and make you feel like you’re at your favourite cottage. 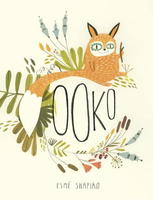 In Shapiro's debut picture book we are introduced to Ooko, a quirky little fox who has everything he needs – except for a friend. He ventures out into the world, changes his appearance to be more appealing, encounters the "Debbies" (humans) and eventually finds a new friend. At the end of the day, Ooko realizes that he doesn't need to change who he is, and that true friends like you just as you are. Shapiro's stylized and diverse illustrations and absurd sense of humour will keep readers giggling, especially when Ooko is mistaken for a pet dog and treated to a bath and other injustices. Diverse characters and a thoughtful underlying message make this one a keeper.

Twelve-year-old self-proclaimed P.I, Howard is smart, observant, and more than a little lonely as he attempts to live by his list of rules of investigation, so newcomer Ivy's refreshing sass is just what he needs to get a new perspective. Lyall's funny and distinctively noir-styled voice engages readers as they follow Howard and his "junior partner" as they face bullies, full-on drama (club) action, sabotage, blackmail and suspicious teachers, all while trying to get their homework completed. The plot is ridiculously fun, and the turns of phrase in this debut middle-grade novel will leave readers of all ages snickering ("Walking through Marvin's store was like walking through a graveyard of questionable life choices."). I could see this being a perfect choice for both mystery buffs and classroom readalouds.

Best of YA: Exit, Pursued by a Bear, by E.K. Johnston

Johnston's re-imaging of Shakespeare's The Winter's Tale gives us a teenage Hermione who is drugged and raped while at cheerleading camp. Refusing to let this act define her, Hermione, with the support of her parents, her best friend and others, demonstrates that every victim is different and that each person will cope in their own way. The story provides a difficult but honest look at the residual effects of sexual assault, rape culture and victim-shaming. Positive female relationships, diverse characters and an absence of stereotypes only add to narrative. This is also a White Pine selection, and one that I hope every teen will have a chance to read.