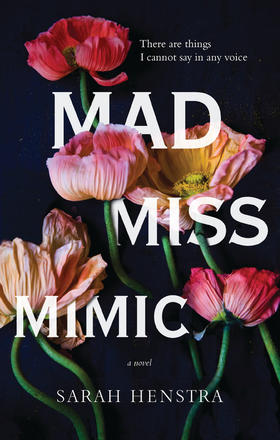 The shortlisted books for this year's Canadian Children's Book Centre Awards exemplify some of the best work by Canadian authors and illustrators across the country. Go here for a complete list of nominees. Winners will be announced at a gala in Toronto on November 17th. And in the meantime, we're featuring the second half of our "Seeds of a Story" feature, in which writers and illustrations share the inspiration for their celebrated works.

Don't miss the first half of the story, which appeared last week.

Mad Miss Mimic began with a visit to Kew Gardens in London, UK, while I was on a research trip for my academic job. I sat on a bench watching a glossy black chicken run around on the lawn, and I started to dream up a story about an upper-class girl in the nineteenth century visiting the gardens with a relative. Who might this girl be? What might be troubling her (because, of course, something had to be troubling her, or there wouldn’t be a story)? Everything I noticed on that trip seemed to bring me back to this girl’s tale, feeding it and giving it substance: the wrought-iron daisies adorning the train station; the handsome old homes in Bloomsbury, where I was staying; the narrow cobblestone alleyways tucked away behind the main thoroughfares, a set of antique glass syringes I came across in a rag-and-bone shop.

In my research I was reading about Victorian women’s traditions of remembrance and mourning. I learned that a wealthy young woman like my protagonist, Leonora Somerville, would have had very little mobility in a city like London. She’d have little or no access to the male-dominated world of business, medicine and politics. Her ambitions would be limited to making a good marriage and (with the help of servants) running a household. So the challenge that spurred me to write Mad Miss Mimic was this: what conflict would force a girl like Leo to break out of her drawing-room and ballroom bubble, to venture out into the city, to dodge all the rules society sets for her? Leo’s ability to mimic other people’s voices, her brother-in-law’s shady medical practices, her fiancée’s opium-smuggling scheme, the explosions terrorizing London—all these wacky plot points came in answer to the question of how to get Leo out into the world for an adventure. 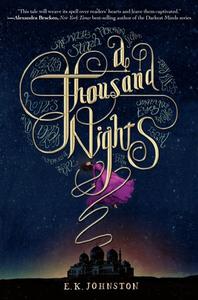 A Thousand Nights, by E.K. Johnston

Nominated for the Monica Hughes Award for Science Fiction and Fantasy

I remember when I was little, and listening to stories, hearing The Thousand and One Nights. Scheherazade marries the cruel king, doesn’t get murdered, has three children, and tells stories to keep staying alive. Then at the end, the king’s all “Hey, you’re very clever, the children are cute, and I’m over my misogynist murder spree!” and…they all lived happily ever after?

My younger self was not here for that.

Much later, after I had finished school for Near Eastern Archaeology and spent several summers in Jordan, I turned to writing, and, eventually, to a folktale retelling. It was going to be Sleeping Beauty, but I needed to do some world-building first, so I went back to magic and back in time, to write what Ithoughtwas going to be a short essay on the history of the world I was making.

And then, one night at work, I had The Thought:Lo-Melkhiin killed 300 girls before he came to my village, looking for a wife, and I realized that I had an entirely separate book…and a lot more work to do.

A Thousand Nights comes from my memories of desert sunsets, of the bond between sisters, of magic and little gods, and of girls who will not be stopped.

The Truth Commission, by Susan Juby

I was inspired to write The Truth Commission when, to my deep dismay, I realized I’d unthinkingly used part of someone’s personal story in a novel I was working on. The tendency for storytellers to use the material at hand is both intriguing and problematic. I’ve heard writers say that they should be able to write about anything, including other people’s personal stories. It must be terrifying for the friends and families of writers like that. In fact, it must be unsettling for anyone who is close to any writer.

After discovering what I’d done, I abandoned the novel I’d been working on and began The Truth Commission, which is about a girl living in fear of how she will be portrayed by her sister, a graphic novelist. The book is, in part, an examination of who can tell our stories and under what circumstances, as well as a consideration how much privacy are we entitled to in this self-documenting, confessional age that paradoxically manages to feel increasingly false. When the main character and her two best friends start a truth seeking club things quickly spiral out of control because the truth is so much more complicated than they expected. 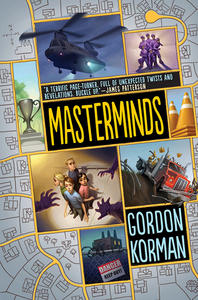 Like all parents, I have a vested interest in observing my kids and trying to figure out what makes them tick. Don’t get me wrong—my wife and I have three awesome children. But every now and then one of them does something pretty jaw-dropping, and we step back and ask ourselves, “Now, where did that come from?” Did it come genetically from one of is? From a friend? Did it trickle in via the media or the internet?

It got me thinking: Could an experiment be designed to determine scientifically whether nature or nurture is the key factor that will determine the kind of person a kid ultimately grows up to be. That’s where Project Osiris began—the twisted experiment to clone criminal masterminds and raise them in a sanitized environment to see if they can escape the evil destiny of their DNA. 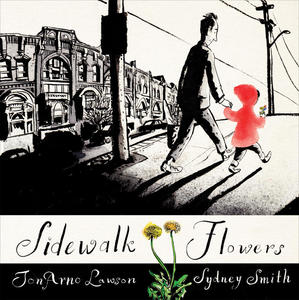 JonArno Lawson: The story for Sidewalk Flowers emerged out of a walk up Bathurst St. with my daughter, Sophie, in the spring of 2008. I'd picked her up from her art class at Bathurst and Dupont, and I was in a rush.

My wife Amy, was at home with our sons Ashey and JoJo—JoJo had been born 2 days earlier—I knew Amy would be tired, and Ashey would want to play. But we couldn't find a cab, I was frustrated—not fully paying attention to Sophie. As we got closer to Vaughan Road, I noticed that she was gathering flowers out of the sidewalk cracks and cement embankments along the way. When we got home, she decorated my wife's hair with flowers, put one behind Ashey’s ear, put others on the baby's hat. And then she went off to do something else. She wasn’t doing it for attention, or thanks, it was just something she was doing. It struck me right away that the whole scenario could make a beautiful picture book, without any words. But I can’t draw very well! So the full realization of the story had to wait for the remarkable talent of Sydney Smith. 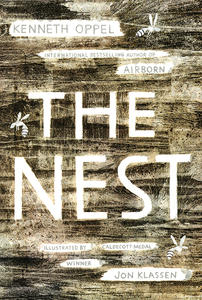 The Nest, by Kenneth Oppel

Wasp nests are fascinating things to me. The papery material looks grey and dry and crackly—it looks like something mummified. It looks like something dead. And yet inside the nest is teeming with life. Hundreds of newly hatched wasps emerging from their cells. Really, if you look carefully, a nest can be rather beautiful. It can have all sorts of different colours and textures and even decorative swirls. Amazing to think of these tiny insects as master architects, making this complicated structure.

And there’s this too about the shape and size of a wasp nest. Whenever I look at one, I can’t help thinking, “You know, I bet you could fit a baby in there.”

And in The Nest, this wasp baby is a perfect baby being made to replace Steven’s sick newborn baby brother. All Steven has to do is say, Yes. 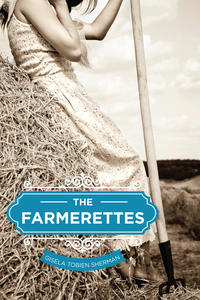 The Farmerettes, by Gisela Sherman

Like most Canadians, I had never heard of farmerettes. Then a few years ago a group of writer friends came to my house for our annual lunch. Sonja Dunn reminisced about her days as a farmerette in nearby Winona. We all begged for details. She explained that they were the high school girls who worked on the farms over the summers during and just after World War II, to replace the men fighting overseas.

As she described some of their adventures, she spoke with such delight, I knew I had to write about them. The topic so appealed to three of my interests—World War Two, farming and the countryside, and how ordinary people caught up in extraordinary historical events cope.

I had a great time researching the war, agriculture, and the times, and interviewing farmers, a pilot, and especially the many former farmerettes who spoke so proudly and fondly of those days.

Sex is a Funny Word, by Cory Silverberg (with Fiona Smyth)

Sex Is a Funny Word began with a realization that something big was missing.  When we talk with kids about gender and reproduction and sexuality we usually start with where babies come from and then immediately skip to puberty. But A LOT happens for kids between the ages of 4, 5, or 6, when little kids begin to ask about where babies come from, and 11, 12, 13, or 14, when kids start reaching puberty.

What happens then is not about sex the way grown-ups think about it, but it is about bodies, and it’s about gender. Our kids are bombarded with messages and rules about bodies and gender and when you think about it from their perspective, most of those rules make no sense.

If everybody is different than how can all people fit into two boxes: boy or girl? And if my body is my own, then how come it’s okay for grown-ups to push me around and tell me what to do?  As someone with dozens of kids in my life I was hearing these questions and wanting to try and answer them. And as someone for whom the grown-up rules don’t work, I wanted to figure it out for myself too.

It's London, 1872, where 17-year-old heiress Leonora Somerville is preparing to be presented to upper upper-class society -- again. She's strikingly beautiful and going to be very rich, but Leo has a problem money can’t solve. A curious speech disorder causes her to stutter but also allows her to imitate other people’s voices flawlessly. Servan …

Open secrets are the heart of gossip—the things that no one is brave or clueless enough to ask. That is, except for Normandy Pale and her friends Dusk and Neil. They are juniors at Green Pastures Academy of Art and Applied Design, and they have no fear.

They are the Truth Commission.

But Normandy’s passion for uncovering the truth is not entire …

In this wordless picture book, a little girl collects wildflowers while her distracted father pays her little attention. Each flower becomes a gift, and whether the gift is noticed or ignored, both giver and re … 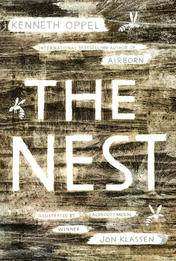 A New York Times Editor’s Choice and a Best Book of the Year in the Globe and Mail, Publishers Weekly, Horn Book, School Library Journal and The Wall Street Journal, called “a masterpiece” (Globe and Mail) and now in paperback

She was very blurry, not at all human looking. There were huge dark eyes, and a kind of mane made of light, and when s … 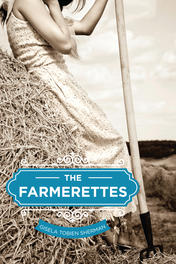 Six girls just out of high school live together during the summer of 1943 on a farm as part of the Farm Services - doing the work of the men who are off fighting the war in Europe. We follow the stories of Helene, who sends her wages home to support her single mother; Peggy, a flirt with a secret she must keep; Binxie, whose rich family doesn't app …