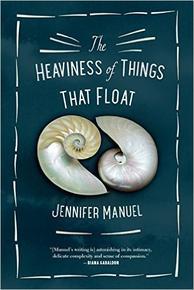 Jennifer Manuel's debut novel, The Heaviness of Things That Float, is about a non-indigenous woman negotiating her place on a West Coast First Nation where she has served as a nurse for the past forty years. Her unsettlement about her approaching retirement is further upset when a young man she's loved like a son goes missing, his disappearance bringing all kinds of stories and secrets to the surface.

Colonialism is not going to simply fade away on its own. It's not a matter of waiting for time to erase it. Nor is it correct to think that Indigenous people are the only ones who need to be decolonized. Non-indigenous people, too, need to insert themselves into the process by confronting colonial legacies and privilege, by questioning the deeply embedded belief that their ways of knowing and seeing and being are superior, and by acknowledging and honouring how interconnected their relationships with Indigenous peoples have become.

The Heaviness of Things That Float is, at its heart, a novel about decolonization and the moral obligation of non-Indigenous people to take part in this process. Here are some CanLit novels that inspired my writing by offering valuable insights on colonialism and decolonization.

At the Full and Change of the Moon, by Dionne Brand

The novel starts with a carefully planned mass slave suicide in 1823, an act of rebellion led by Marie-Ursule, Trinidadian leader of a secret society of militant slaves. Due to the iron ring she once had around her ankle, Marie-Ursule walks with a permanent limp. Her body is scarred from the whip, and she has found ways to cope by violating her body many times. It is difficult not to draw parallels between the dehumanization of Marie-Ursule and Aboriginal women in Canada, particularly in the context of Murdered and Missing Indigenous Women. Only Marie-Ursule's daughter Bola is spared from the suicide plot, and it is through her survival that the long-term effects of hereditary are traced over the subsequent years.

Anil Tessira is a forensic pathologist sent to Sri Lanka by the UN human rights commission to investigate reports of mass murders in the context of the island's mid-1980s civil war. A native Sri Lankan, Anil makes the trip back home for the first time in fifteen years. The underlying assertion in this novel, demonstrated by Ondaatje's cryptic layering of flashbacks and secrets, seems to be that an accurate and comprehensive knowledge of past conflicts is not readily achieved in a postcolonial existence. Certainly not in the presence of so many silent voices.

After the disappearance of her brother along the Pacific Coast, Lisa not only recalls her Haisla life in Kitamaat as she teeters on the threat of his fate, but she reveals her "gift" of seeing and hearing spirits. Through her recollections and her dreams, the story unveils a life of survival that combines traditional ways of life with the aftermath of residential schools as well as modern challenges. Like other novels addressing a colonial legacy, there are recurring images of disfigurement. Colonialism's brutality, both psychologically and physically, must be acknowledged, not forgotten.

The primary wound of colonialism is, of course, inflicted on identity. Dumont's personal exploration of identity as a Metis woman is further layered by the neither-this-nor-that labelling of Metis people. The deft use of irony in Dumont's work exposes stereotypes and assumptions in a powerful way that also hints at the complexity of identity. "The White Judges" section points to the various judgements of Aboriginal people and the resulting shame that is felt. The idea of shame, particularly where it is unjustified and undeserved, is perhaps the most heartbreaking social phenomenon in society.

Following a terrible tragedy, Celia's dreams the history of colonization—from the transmission of smallpox that arrived with blankets to the present day, with all the tragic and traumatic phases in between, including residential schools. The story employs a witness narrator, Mink. It is a point of view which carries additional meaning: a big part of this story is the significance of bearing witness, both as an important role in the community and as a personal path to healing. This novel reminds us why the testimonies given during the Truth and Reconciliation Commission were so essential.

Daughters are Forever, by Lee Maracle

The social pathologies that arise straight out of colonialism have been addressed many times, but Maracle depicts the maternal guilt of such pathologies with heartwrenching honesty. This novel follows Marilyn's maternal guilt, showing how it cyclical it can be, for Marilyn herself and for her children as she struggles with alcoholism. Maracle suggests that children's bodies carry the memory of dysfunction and trauma into the next generation. A reader might therefore conclude that the memory of something very different, something increasingly positive, might also be remembered in the body as reconciliation, hopefully, takes place in our society.

Experiencing diverse perspectives through literature isn't just about what is said, but how it's said. In this incredible collection of stories about contemporary First Nations people, Simpson uses a variety of devices to share her stories, ways that more closely reflect her Anishinaabe culture. How many non-First Nations people in Canada, except maybe those who studied it specifically in school, realize that other people have different modes of storytelling, often less linear, than Eurocentric modes? Engaging in texts like Simpson's is essential to understanding and honouring different ways of knowing and being, and therefore essential to decolonization.

This story of Canada's internment and persecution of citizens of Japanese descent raises interesting questions about the dangers and safety of silence, as well as the larger question that seems to pervade all experiences of collective trauma and injustice: should it be remembered or forgotten? While this is an important book unto itself, it does also provide an interesting contrast to the treatment of First Nations people in Canada. Can the question of forgetting and remembering even be considered when the legacy of colonialism still impacts First Nations people daily? Why are Canadians willing to hold the physicality of internment camps, such as the one visited by tourists in the Slocan Valley, BC, in their historical imagination but often refuse to face the physicality of reserves as directly?

This Side Jordan, by Margaret Laurence

Laurence's novel is based on her time living with her husband on the Gold Coast (now Ghana) in the years right before independence. It is a tricky thing to depict such upheaval as an outsider, but Laurence's take on race relations and colonial exploitation in fact predicted many of the issues that eventually troubled Ghana for the next several decades. Sometimes it takes leaving your own country to gain insight on the nuances of colonialism and the challenges of decolonization.

About The Heaviness of Things That Float:

Jennifer Manuel skilfully depicts the lonely world of Bernadette, a woman who has spent the last forty years living alone on the periphery of a remote West Coast First Nations reserve, serving as a nurse for the community. This is a place where truth and myth are deeply intertwined and stories are “like organisms all their own, life upon life, the way moss grows around poplar trunks and barnacles atop crab shells, the way golden chanterelles spring from hemlock needles. They spread in the cove with the kelp and the eelgrass, and in the rainforest with the lichen, the cedars, the swordferns. They pelt down inside raindrops, erode thick slabs of driftwood, puddle the old logging road that these days led to nowhere.?

Only weeks from retirement, Bernadette finds herself unsettled, with no immediate family of her own?how does she fit into the world” Her fears are complicated by the role she has played within their community: a keeper of secrets in a place “too small for secrets.” And then a shocking announcement crackles over the VHF radio of the remote medical outpost: Chase Charlie, the young man that Bernadette loves like a son, is missing. The community is thrown into upheaval, and with the surface broken, raw dysfunction, pain and truths float to the light.

Jennifer Manuel was a treaty archivist for the Ktunaxa Nation before teaching elementary and high school on the lands of the Tahltan and Nuu-chah-nulth peoples. The Heaviness of Things That Float is her first novel. She lives on Vancouver Island, where she writes and tries to get people to read the Truth and Reconciliation Commission Report.

Heaviness of Things That Float

Jennifer Manuel skilfully depicts the lonely world of Bernadette, a woman who has spent the last forty years living alone on the periphery of a remote West Coast First Nations reserve, serving as a nurse for the community. This is a place where truth and myth are deeply intertwined and stories are "like organisms all their own, life upon life, the …

At the Full and Change of the Moon

In 1824, on the island of Trinidad, Marie Ursule, queen of a secret society of militant slaves, plots a mass suicide - a quiet, passionate act of revolt. But she cannot bring herself to kill her small daughter, Bola, whom she smuggles away in the early dawn light. As Bola's children, grandchildren, and great-grandchildren spill out across the world …

Following the phenomenal success of Michael Ondaatje’s Booker Prize-winning third novel, The English Patient, expectations were almost insurmountable. The internationally acclaimed #1 bestseller had made Ondaatje the first Canadian novelist ever to win the Booker. Four years later, in 1996, a motion picture based on the book brought the story to …

“Monkey Beach creates a vivid contemporary landscape that draws the reader deep into a traditional world, a hidden universe of premonition, pain and power.” --Thomas King

Tragedy strikes a Native community when the Hill family’s handsome seventeen-year-old son, Jimmy, mysteriously vanishes at sea. Left behind to cope during the search-and-resc …

On the occasion of the press's 40th anniversary, Brick Books is proud to present the fourth of six new editions of classic books from our back catalogue. This edition of A Really Good Brown Girl features a new Introduction by Lee Maracle, a new Afterword by the author and a new cover an …

Mink is a witness, a shape shifter, compelled to follow the story that has ensnared Celia and her village, on the West coast of Vancouver Island in Nuu’Chahlnuth territory.

Celia is a seer who — despite being convinced she’s a little “off” — must heal her village with the assistance of her sister, her mother and father, and her nephews. …

In her debut collection of short stories, Islands of Decolonial Love, renowned writer and activist Leanne Simpson vividly explores the lives of contemporary Indigenous Peoples and communities, especially those of her own Nishnaabeg nation. Found on reserves, in cities and small towns, in bars and curling rinks, canoes and community centres, doctors … 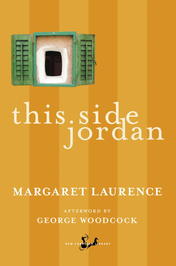 In 1957, the British colony of the Gold Coast broke free to become the independent nation of Ghana. Margaret Laurence’s first novel, This Side Jordan, recreates that colour-drenched world: a place where men and women struggle with self-betrayal, self-discovery, and the dawning of political pride.

This Side Jordan transcends the traditional limits …