David Yee is a Dora Mavor Moore Award-nominated actor and playwright, former playwright-in-residence at the Tarragon Theatre and Factory Theatre and currently serves as Artistic Director of fu-GEN Asian Canadian Theatre Company. His other plays include lady in the red dress and paper SERIES, and his work has been published in the Asian Canadian drama anthology Love & Relasianships (edited by Nina Lee Aquino) and the monologue book Refractions: Solo (edited by Yvette Nolan & Donna Michelle St. Bernard). David Yee, who proudly identifies himself as a Hapa of Scottish and Chinese descent, was born and raised in Toronto.

Writing for Now magazine, Jon Kaplan said of carried away on the crest of a wave: “The script is rich with poignancy, tragedy and humour…Yee’s clever, insightful writing rarely fails to draw a response, whether he’s using his trademark off-centre laughs or a solemn moment to make a point.”

THE CHAT WITH DAVID YEE 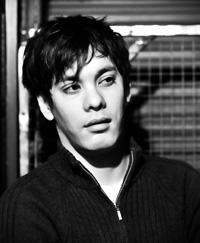 What was your first reaction to finding out you’d won this year’s Governor General’s Award for Drama?

Hah. When Lori told me, I heard everything as though she was speaking in slow motion, waiting to hear the words “we regret to…” but they never came. When I realized she was telling me I’d won, I asked if she was kidding. She said “I wouldn’t joke about that.” Then I called in late to my own rehearsal and just tried to make my hands stop shaking.

Writing drama is typically a very collaborative process. Can you walk us through the creative steps involved in bringing your play to life—first on the page, and then to the stage?

On the page, I worked on the play with Tarragon Theatre—first through their playwright’s unit, and then with me in residence at the theatre. Andrea Romaldi (Tarragon’s literary manager) and Richard Rose (the artistic director) guided the play through that development process, which took about two–three years. They just turned me loose on my own work; allowed me to take the time I needed, and work the way I needed to, giving me all the support I could ever ask for. I can’t be effusive enough in my praise of them.

Once in rehearsal, I was in a familiar space. Nina Lee Aquino has directed all of my Toronto premieres, and we have a very collaborative working relationship. We have a shorthand that’s developed over a decade of working together, and that’s a really great gift. The company of actors we had were all stellar, it was a room full of muses, there was so much support and exchange of ideas. The work wouldn’t be what it is today without that team of people.

The play deals with the aftermath of the devastating 2004 Indian Ocean tsunami, a disaster that claimed the lives of over a quarter of a million people. How much research was involved as you went about building your fictional world? Was it important to you to replicate the specific details and energy of the disaster and its aftermath?

The research and the writing were happening in tandem, during the five years it took to develop the piece. I spoke to about two dozen people who had various connections to—and accounts of—the event, and I actually finished the play while doing first-hand research in Thailand. It’s important to me, as a dramatist, not to replicate the details … but to know them. I had to learn all about tectonic subduction and how tsunamis behave, I learned about each country and city the waves touched, I read a metric tonne of material ... and then I created a world where some of that mattered and some of it didn’t. What mattered most were the people inhabiting that world, their stories ... and if the research helped tell those stories, then I wasn’t afraid to use it. If it didn’t help, I also wasn’t afraid to throw it away.

The Toronto Star review of the Tarragon production called the play "a series of vignettes to show that we are all interconnected, no one is truly alone and we have to be sensitive to other people’s needs and wants.” Was this sense of human interconnection front and centre for you as you wrote? How did this sense of interdependence influence the development of your characters and their storylines?

The sense of interconnectivity was very strong from the first word on the page. I had started writing with only the small bit of connection and experience I had with the event, and themes of connection and intersection were already manifesting themselves in the work quite prominently. Luckily, when my research began in earnest, I found that what I had been inventing was actually very close to the experience of those who were there, inside of it. It was a great relief; knowing that everything you’d created wasn’t just self-serving bullshit.

What's your own litmus test for good theatre? Are there particular playwrights, directors, or others who have influenced your development as an artist?

I tend to remember theatre that asks a burning question. Answers are less important. I think good theatre reflects the world; I look for diversity of practice, and of voice ... I don’t need to see more theatre about dead white men. Or alive white men. I need to see theatre about the world beyond Eurocentric Western ideology. I’m very lucky to have three published plays, and each has a foreword written by artists who were incredibly influential in finding my voice, as a writer: Guillermo Verdecchia, Daniel MacIvor and David Henry Hwang. Directors like Nina Lee Aquino and Jillian Keiley really understand theatricality. Their work always makes me believe in the form again, in what it can accomplish, in new ways. And that challenges me to be a better artist.
_____

EXCERPT FROM carried away on the crest of a wave:

KINTARO: Toronto. I went to Toronto.
MAKOTO: To her apartment.
KINTARO: Hai. When I arrived there ... I thought I was in the wrong place. Mess everywhere. Bits of foil and syringes for drugs. The girl that lived in that place was a dark version of the daughter I knew. The same on the outside, but frightening inside.
MAKOTO: I was afraid you had seen this...
KINTARO: I was ... despondent ... I turned on a radio for some music; I find music soothing. But this station ... they were playing a song I recognized, but the words were ... twisted. Cruel. Impossibly cruel. I took a step backwards, and that’s when it happened. I heard a floorboard crack and I fell. Down a hole. I don’t know where it came from. I guess it had been hiding there, under the floor.
Beat.
MAKOTO: And the hole did not ... speak ... to you?
KINTARO: Certainly not. It’s a hole, what would it say?