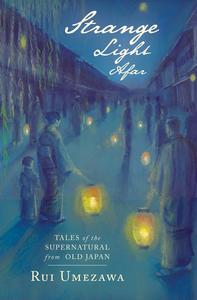 In Strange Light Afar, Rui Umezawa revisits eight popular Japanese folktales, delving beneath their sometimes baffling plot lines to highlight the psychological motivations behind the characters’ actions. Sometimes laced with ironic humor, sometimes truly horrifying, these stories of the strange and supernatural are written to particularly speak to teenagers, although they will appeal to readers of all ages.

We are pleased to share this chilling excerpt from the story, "Trickster."

Night had fallen like a strange, dark curtain on the woods surrounding the house. I tried to find my way back into town, hoping to find the old noodle vendor, who might share a bit more of his wine.

I decided the surest path was to follow the river, which I knew cut the town in half. The moon hid among tree branches, in and out of clouds. Pillars of light appeared, then disappeared across the trail, and a breath of chill caressed the back of my neck. A murmur in the water and the whisper of leaves made me think maybe I should walk faster.

After a time, I came upon a woman crouched by the path, quietly sobbing into her hands. You could tell she was from class. The wind carried the enticing scent of her flowery perfume, and this made me stop.

Normally, I’m not one to do much for strangers in need. Trouble begets more trouble, so it’s usually best not to get involved. But the moonlight fell on the nape of her neck, and her pale skin was as unblemished as virgin snow.

She stopped crying, but she didn’t answer or look up.

Suddenly, a few nightbirds took flight overhead, their wings casting shadows on the moon. Something made me swallow, hard. The hands covering her face were thin and delicate, and looked like they might break if I took them.

“Is there anything I can do for you?” I said. “Pretty girl like you shouldn’t be out so late.”

“Did you say I was pretty?” she said, getting up and turning away from me, as though to show off the ornate obi tied around her waist at the back. It was obviously expensive.

“Do you really think I’m pretty?” She turned around, and the moonlight illuminated her face.

I saw then that she had no eyes. She had no mouth. She had no nose with which to breathe. Not even eyebrows. Her face was a smooth surface of creamy white skin.

A voice came from somewhere far away. “Am I really pretty?”

Do you see what I mean? Do you think I deserved this? My mouth was open, but I tell you, nothing came out. I flapped my arms like a neurotic bird as my knees became water. It’s a wonder I didn’t fall on my rear.

Everything was laughing at me. The night, the trees, the earth beneath my feet and the Shimano River.

I turned and ran. I didn’t know in which direction, because it didn’t matter. I think I was crying for help. I’m not sure now, in hindsight. The trees slapped me with their branches and I lost my sandals, but still I didn't stop. My kimono was coming undone and my feet were bruised, but I kept running.

I don’t know how long I ran. I just didn’t seem to be getting anywhere. I knew I was still alive, though, because I was breathing harder than I ever had in my life.

Just when I thought I might lose my mind, I saw the faint glow of a lantern. I screamed something incoherent and ran toward it. As I approached the light, I recognized a silhouette of a man.

Then I saw the lantern hanging from a noodle cart and recognized the comforting aroma of chicken broth.

The noodle vendor took my arm as I stumbled, leading me to a stool in front of his cart. In the light I saw his eyes among the folds of wrinkled skin, looking at me, puzzled.

I blubbered something incomprehensible, spitting more than saying anything coherent. The steam rising from the boiling water wrapped around the red lantern and hovered like a ghost.

“Th-th-thanks.” The warmth was delicious, spreading like a dream across my chest.

“What happened?” he asked.

For the first time, I noticed we were still by the river. The water flowed gently, whispering behind my back.

“It was ... it was terrible, old man. There was this woman in the woods. She…she...” The words stumbled over each other and fell, and I knew he couldn’t understand a thing. I started to cry again.

He smiled kindly and ladled some noodles into a bowl.

My sobs became louder. It didn’t cross my mind to ask him why he had moved his cart away from the festival.

He was working intently at chopping some chives, but when I didn’t reply, he looked up.

Through the steam, I could see that he no longer had eyes, nor a mouth, nor a nose with which to breathe. Not even eyebrows. His wrinkles had disappeared, and his face was nothing but smooth skin.

I swallowed my voice.

Just then, a gust of wind smothered the lantern’s flame, and I found myself alone with him in the velvet darkness. I turned to run, but the ground gave way beneath my feet.

I fell, and all I heard was laughter from somewhere below me just before I hit the water.

From Strange Light Afar: Tales of the Supernatural from Old Japan, by Rui Umezawa, illustrated by Mikiko Fujita. 2015: Groundwood Books. Appears with permission of the publisher. 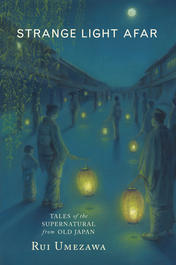 Tales of the Supernatural from Old Japan

A bitterly jealous brother, a samurai who makes the ultimate sacrifice, a cold-hearted husband, a monk who mistakes desire for piety, a fraudulent merchant who meets his match in a supernatural river otter — the motives underlying these traditional Japanese folktale characters are explored with haunting results.

Prompted by the sometimes illogica …