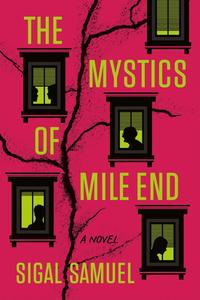 Growing up, I often wished I lived in Mile End. Instead I inhabited Cote-Saint-Luc, a suburb so insularly Jewish that we nicknamed it Cote-Saint-Jew. I wanted to be a Mile Ender because that place, with its cheap rent and charming cafés, had a reputation as an artist hub (Arcade Fire, anyone?). It was a mirror for myself as I wished I could be.

In The Mystics of Mile End, my debut novel about a dysfunctional Jewish family with a dangerous mystical obsession, I use that neighbourhood as a setting and also as the backbone for a bildungsroman: the growth of the characters unfolds largely through their shifting attitudes toward their neighbours.

Family patriarch David Meyer is an atheist professor, but when he’s diagnosed with a heart murmur, he becomes convinced that the murmur is God speaking to him. As he goes running to crank up the volume of his heart, he bumps into his Hasidic neighbours—the two cultures literally bump up against one another. At first, David resents these Hasids. But before long, he’s beating his own breast in front of the synagogue and looking, to all outward appearances, like a worshipper begging forgiveness for his sins. 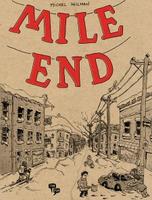 Mr. Katz, an eccentric Hasid shunned by his own community, becomes a screen upon which the family members project their ideas about religion. As he tries to recreate the biblical Tree of Knowledge out of plucked leaves, toilet paper rolls and dental floss, each of the Meyers sees him differently: David mocks him, son Lev is fascinated by him, and daughter Samara pities him.

Oddly, the Mile End that charmed me when I was younger no longer quite exists. Once a haven for immigrants, its gentrified cachet now prices people out. Mile End is a brand, something you see on T-shirts and pillow covers and fridge magnets and restaurant menus, even in my current home of Brooklyn. It’s growing into a parody of itself, forcing me to ask: At what point did we cease to describe a real place, and start describing the myth of a place we’ve created in our imaginations?

Oddly, the Mile End that charmed me when I was younger no longer quite exists.

Two other recent books get at this question in creative ways. In a graphic novel, Mile End, Michel Hellman tells the story of the neighborhood as he saw it change over ten years. It’s full of gently self-mocking, tongue-in-cheek passages—my favorite is the one about all the hipsters wearing those ubiquitous plaid shirts without having any idea why.

Guillaume Morissette’s New Tab is a laugh-out-loud funny novel about the aimless 20-somethings who inhabit Mile End. They are Anglos and Francos, video game designers and partiers and beautiful losers and "awesome guys trying to figure out life."

They’re the people I wanted to be a few years ago—but these days I’m happy just being me. As my characters have grown up in and through Mile End, I guess maybe I have, too.

Sigal Samuel is an award-winning fiction writer, journalist, essayist, and playwright. Currently a writer and editor for the Forward, she has also published work in the Daily Beast, The Rumpus, BuzzFeed, and The Walrus. Her six plays have been produced in theaters from Vancouver to New York. Originally from Montreal, Sigal now lives and writes in Brooklyn. The Mystics of Mile End is her first novel. Mystics of Mile End, The

Four distinct voices weave together the tale of a dysfunctional Montreal family obsessed with climbing the Kabbalah's Tree of Life. This literary debut by Jewish Daily Forward editor Sigal Samuel is reminiscent of Nicole Krauss's The History of Love and Myla Goldberg's Bee Season.

The Meyer family lives in Mile End, home to a mashup of hipsters and …