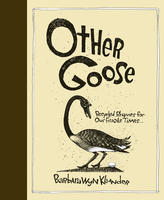 Other Goose: Recycled Rhymes for Our Fragile Times, by Barbara Wyn Klunder, is a little gem, with etching style illustrations. Its tongue-in-cheek take on the environment includes poems about "This little piggy" going to market but not finding parking, Jack and Jill opting for bottled water, and "Baa baa, black sheep/ Have you any gas?/ Are you kidding me, man? / No one has!" The collection addresses second-hand smoke, logging, consumerism, food banks, the soil cycle, pollution, politics, gas dependency, today's fast-pace, environmental allergens, oil slicks, the role of art and celebrity. Because of the high-level humour and the need to understand the context of the satire, this one would work best with grades 4 to 6.

Voices from the Wild, An Animal Sensagoria, by David Bouchard, paintings by Ron Parker, is a dialogue between a Northern painter and his animal subjects. It's divided into five sections, with creatures sorted according to their dominant sense. Each poem, from the animal's point of view, is infused with a few facts, accompanied by a realistic painting. It might be fun to read aloud each page and have others guess the animal. The end poem questions why humans have lost some of their sense-abilities: "What of humans? What's the reason/ That we've not been featured here?" The back pages include additional information with a final poem pondering the changing relationship between humans and animals. For grades 4 to 6. 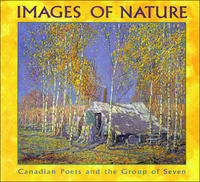 Have you ever returned from a canoe trip and tried to hold onto the feeling and images? Images of Nature: Canadian Poets and the Group of Seven, compiled by David Booth, accomplishes this. Canada is interpreted through the paintings alongside poets, including Birney, bissett, Cohen, Atwood, and Robert Priest. Pictures and text are laid out in perfect balance, allowing conversation, focusing on trees. Afterwards there's a note on the origins of the Group of Seven. Great for grades 4 to 6. 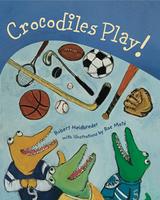 Crocodiles Play!, by Robert Heidbreder, illustrated by Rae Maté, reads like a picture book; it's good for grades K to 3. Each page is a poem with a bright humourous illustration setting up the crocs in a particular sport, ending with the line, "and they play..." The reader turns the page to a surprise: crocs playing baseball with golf clubs, pingpong with a basketball, tennis tag, and footballers enjoying Ring-a-Round-the-Rosie. 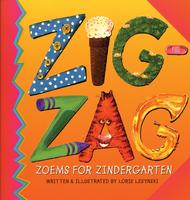 Zig-Zag Zoems for Zindergarten, by Loris Lesynski, is for the 4- and 5-year-old crowd and those who work with them. These attention-grabbing chants could be used to gain group focus, to reinforce the days of the week, to say goodbye. All playfully illustrated, there are poems to accompany learning centres (cutting, painting, working with paper) and poems to learn colours, stripes, and zigzag lines, especially how to think of zigzags in wildly creative ways.

Black Stars in a White Night Sky, by JonArno Lawson, illustrated by Sherwin Tjia, is a collection laced with word play, for example: "A Bison in a Basin Playing a Bassoon" or "The Maple Leaves That Mable Leaves." There are some local references, like Hamilton Armouries or the poem debating the pronunciation of Etobicoke. A few favourites include "Humpty Dumpty" (giving an alternate explanation for the fatal fall) and "The Knuckle Nicking Buckle." The endnotes, "Small Type Notes for Those with Excellent Eyesight," provide a glimpse into a poet's thinking. It also mentions three of the poems are "lipograms," a challenging form that kids might like to try. Because of the vocabulary, this would be appropriate for grade 6 and up.

If I Had a Million Onions, by Sheree Fitch, is illustrated by Yayo, whose tiny pictures are poems themselves with their surrealist-like imagery, for example, a lipstick silo, a skyline accordion, and the insertion of onions everywhere (a dancer's skirt, a ring a dolphin jumps through). Word play and a love of language are evident in this book, too. For instance, "Beggs and Acon" ("Would you like a twice of sloast?"). Fitch has a knack for combining words to make new ones, as in, "One Blizzardous Nightstorm," a traveller..."stampoared through the worests and mounthills and strooks/ Beceason? His overdue library books!"). The sweet poem that ends the book, "A Prayer," is a form that young poets might want to use to create their own. One of the poems gives sage advice: "Read a poem a day."

Any of these books would help achieve that goal. 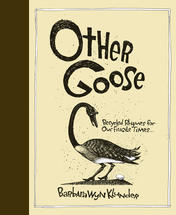 Recycled Rhymes for Our Fragile Times

Artist and designer Barbara Wyn Klunder takes on classic nursery rhymes and turns them on their heads, adding her own quirky twist to familiar favorites.

Rock-a-bye baby laments the loss of her treetop to logging. Old Mother Hubbard must resort to a food bank. Jack and Jill discover that their well water is polluted, and Mary watches her garden flou … 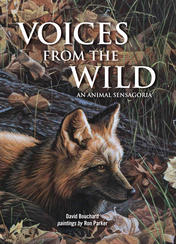 Voices From the Wild

What would it be like if more than two dozen different wild animals from around the world got together to boast about their senses? David Bouchard delivers a unique exploration of the realm of the senses in 25 animal portraits. In warm, lyrical verse, Bouchard introduces the reader to some fascinating aspects of natural history and explores each se … 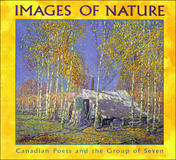 Canadian Poets and the Group of Seven

From a harsh rocky shore to a golden prairie field, kids are invited to journey through the breathtaking Canadian landscape. Children's literature expert Dr. David Booth matches more than 25 rugged and beautiful paintings by the Group of Seven and Tom Thomson with the voices of Canada's most talented poets. The result is a memorable treasury of sig …

Crocs play baseball, basketball, golf and table tennis on the wrong fields and courts, using the incorrect equipment with no respect for the rules. A game of tag is played by crocodiles dressed in tennis shorts, soccer players play hide and seek, and foot-ballers play ring-around-the-rosie. 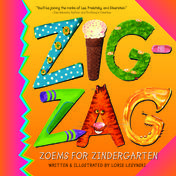 Celebrated word-whiz Loris Lesynski is back with a poetry collection for her youngest fans.

After hundreds of school visits, Loris knows that kindergarten kids have their own kind of wit. Too old for nursery rhymes and too young for irony, kindergarteners crave a playfulness that Zigzag zupplies by the zillions!

Bursting with zaniness, these poems f …

If I Had a Million Onions

This exciting new collection by Sheree Fitch poetry will tickle the funny-bones of children and adults alike. Yayo's delightful illustrations perfectly match the whimsy of these capricious poems.