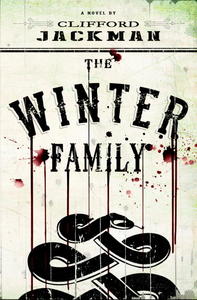 "Tracing a gang of ruthless outlaws from its birth during the American Civil War to a final bloody showdown in the Territory of Oklahoma, The Winter Family is a hyperkinetic Western noir and a full-on assault to the senses." Intrigued yet? Craig Davidson reports that this novel "lit my synapses up like a pinball machine."

We're pleased that today we've got Clifford Jackman with a list of Canadian works of historical fiction. It's a good one.

Some years back, I was writing a novel set in Victorian London and I wanted to do a little research—this was before Wikipedia. So, deciding to read some stories set in that time period, I picked up my copy of The Complete Sherlock Holmes. You can imagine my surprise when I found no descriptions of hansom cabs or gaslights or anything like that. Then it struck me: Doyle had no need to describe any of that stuff, because his audience had already known all about it. He would no more provide a detailed description of a hansom cab than a modern writer would describe a Honda Civic.

There are many great challenges in writing a historical novel. You'll never get it all right, anachronisms will always creep in, but you're writing for a modern audience anyway, and what you're searching for is not authenticity but to create a particular impression for a particular kind of reader. What do you put in? What do you leave out?

The Englishman's Boy, by Guy Vanderhaeghe

Two historical novels in one, this book tells the story of a legendary cowboy who rides through Montana to the Canadian plains in pursuit of stolen horses, and a screenwriter commissioned to tell the story in 1920s Hollywood. Both settings feel vividly true, and the theme of the construction of history is particularly appropriate for an historical novel.

Largely set in Berlin and Paris in the early stages of the Second World War, Half-Blood Blues tells the story of black jazz musicians caught in Europe during an extremely dangerous time to be a black jazz musician in Europe. The novel’s consideration of genius and jealousy is timeless.

Famously difficult to work with (the dedication to The Score reads: "This one’s for every poor son of a bitch that’s ever had to work with me"), Canadian writer and artist Darywn Cooke is adapting Richard Stark's "Parker" novels into graphic format all by himself. I've listed them here because of Cooke's incredible attention to detail. In the first few pages of "Parker" we see the titular protagonist forge a driver's license with a form filched from the DMV, use the license to get a cheque book, and then write bad cheques to buy a clean suit of clothes. The Parker graphic novels aren't just noir, they bring a granular, perfectionist attitude towards a world not very old but almost entirely gone. Try them: maybe you'll turn into a butterfly.

The Outlander, by Gil Adamson

Nineteen-year-old Mary Boulton, having murdered her husband and pursued by her two brothers-in-law, flees west. She encounters a variety of bizarre characters, dramatic weather, and sublime landscapes. Boulton is trembling on the edge of madness and the novel feels almost Gothic in its approach. A very memorable read.

The Orenda, by Joseph Boyden

Alternatively shockingly violent and surprisingly tender, The Orenda is a remarkably clear-eyed look at the heroic age of Canadian history, describing the war between the Iroquois and the Huron in Quebec and the 1600s.

All True Not a Lie In It, by Alix Hawley

Hawley's debut novel (it just came out in February) is a literary re-telling of the life of Daniel Boone, whose exploits were mythologized by his friend and biographer while he was still alive. Hawley powerfully evokes the claustrophobia and the murky darkness of the frontier, where anyone could be hiding in the trees a few dozen yards away.

The Sisters Brothers, by Patrick DeWitt

Two brothers, Eli and Charles Sisters, are sent to kill a man named Hermann Kermit Warm. What makes this novel is special is not the painstaking research, but rather the creation, out of nothing, of a whole new language and a new world. We are told that the past is a foreign country, but too often in historical fiction the past seems just like today, with a few period signifiers added for color. The Sisters Brothers lets you know right from the beginning that you are in a place where people do things differently.

In 1843, Grace Marks and James McDermott were convicted of murdering two people. McDermott was hanged while Grace was sentenced to life in prison. The depiction of 19th century prisons and asylums are disturbing and detailed, as is the life of a domestic servant. Finally, the ultimate mystery (did she do it, and if so why?) is very engaging. Despite having won the Giller Prize, I think this novel is often overlooked. Check it out if you haven't read it.

Clifford Jackman was born in Deep River and raised in Ottawa. He received a BA from York University, an MA from Queen's University and an LLB from Osgoode Hall Law School. He practices law in Richmond Hill, Ontario, and counts Stephen King and Cormac McCarthy among his strongest literary influences. 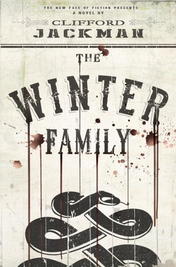 Tracing a gang of ruthless outlaws from its birth during the American Civil War to a final bloody showdown in the Territory of Oklahoma, The Winter Family is a hyperkinetic Western noir and a full-on assault to the senses.
From the 1860s to the 1880s, the outlaws known as the Winter Family roam the harsh frontier, both serving and battling t …

This brilliant and compelling novel, set in the early days of the Canadian West, is the first of three linked historical novels by Guy Vanderhaeghe, one of Canada's preeminent storytellers.

The Englishman's Boy brilliantly connects Hollywood in the 1920s with one of the bloodiest, most brutal events of the nineteenth-century Canadian West -- the …

In 1903, a mysterious, desperate woman flees alone across the West, one quick step ahead of the law. She has just become a widow by her own hand. Two vengeful brothers and a pack of bloodhounds track her across the wilderness. She is nineteen years old and half mad.
Gil Adamson’s extraordinary award-winning novel opens in heart-pounding mid-fligh …

A visceral portrait of life at a crossroads, The Orenda  opens with a brutal massacre and the kidnapping of the young Iroquois Snow Falls, a spirited girl with a special gift. Her captor, Bird, is an elder and one of the Huron Nation's great warriors and statesmen. It has been years since the murder of his family and yet they are never far from hi …

Winner of the Governor General's Award for Fiction, the Rogers Writers' Trust Fiction Prize, the Prix des libraires du Quebec and the Stephen Leacock Medal. Shortlisted for the Man Booker Prize, the Scotiabank Giller Prize, and the Walter Scott Prize.

Hermann Kermit Warm is going to die: Eli and Charlie Sisters can be counted on for that. Though Eli …

Around the true story of one of the most enigmatic and notorious women of the 19th century, Margaret Atwood has created an extraordinarily potent tale of sexuality, cruelty, and mystery. In 1843, Grace Marks was convicted for her involvement in the vicious murders of her employer, Thomas Kinnear, and Nancy Montgomery, his housekeeper and mistress. …