Each month our resident Children's Librarian, Julie Booker, brings us a new view from the stacks.

The overriding link between these titles is Prince Edward Island, but keep an eye out for the recurring red-heads!

In Ghost Boy of MacKenzie House, by Patti Larsen, Chloe is forced to leave Ottawa to live in rural PEI, after the sudden death of her parents. Through her grief, she must adjust not only to her Aunt Larry's huge rambling house, the fields, the ocean, and all that space, but also to the chatty red-headed boy, one of seven siblings, from the neighbouring farm, who wants to be fast friends. A ghost appears, launching Chloe on the trail of a local mystery. Larsen's detailed, descriptive writing beautifully captures the PEI landscape and its people. For grades 4 to 6.

They're cute. They're funny. They're the Powerpuff Girls, now rebooted in a graphic novel series by PEI resident, Troy Little. The cherub-like girls were created in the lab by their Professor Dad from “sugar, spice and everything nice” (and some awesome superpowers.) Buttercup likes a fight, Bubbles is pure love, while Blossom stays level-headed. In Second Chance, Volume 1, the reader is immediately plunged into the action, with Mojo Jojo, the lab-monkey-turned-evildoer causing havoc by using a giant metal exoskeleton to shoot fire bombs in the city. The girls do their job and land Mojo in maximum security prison where he mysteriously repents. As do the city's villains, a host of wacky characters, like the swamp creature with the thick Scottish accent who's producing huge divots on the golf course. (Turns out he's swallowed a certain red-haired golfer who disappeared in '63 after hitting 225 on a par 72.) The trio reflect on their own vices in order to decide if there's such a thing as a second chance. The colourful, action-driven panels of this graphic novel appeal to all ages. 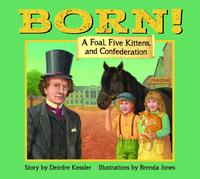 Born! A Foal, Five Kittens and Confederation, by Deidre Kessler, illustrated by Brenda Jones, features the famous painting, "Meeting of the Fathers of Federation," painted by Robert Harris in 1864. Kessler uses the painter as a character, along with 10-year-old twins, Grace and (red-headed) Gabriel, to weave a plot around a conflation of important events: a circus coming to town, animals birthing in the twins' father's livery stable, and government leaders arriving in Charlottetown to discuss unity of the colonies. The realistic, bright illustrations, along with Harris' real paintings, show this significant time in Canadian history,

Another red-head appears in That Boy Red by Rachna Gilmore, for grades 4 to 6. The eleven-year-old protagonist is like a boy version of Anne of Green Gables, always in and out mischief. First, Red steals a switch of granny's treasured hair, then he loses his little sister, and then has a few run-ins with his older sister, who is also his teacher in the one-room schoolhouse. It's set during the Depression in small town PEI, with Red's large family committed to each sibling putting the next youngest through school. Things turn serious when his father loses some fingers woodworking and Red is expected to help run the family business. It's a boy-to-man story, dealing with brothers and sisters growing up, moving on.

There are many versions of Glooskap, but one of the Mi'kmaq myths has Glooskap using Nova Scotia for his bed and PEI for his pillow. Glooskap's Country and Other Indian Tales, by Cyrus MacMillan, is full of delightful short stories often involving widows or orphans or tricksters with common themes of jealousy, revenge, trials and explanations of “how things came to be.” Standouts include “The Fall of the Spider Man,” where the main character lives in the sky, creating ladders for star-fairies to climb up and down; “The Indian Cinderella,” a compelling story about honesty, deceit, and true beauty; the surprising plot twists of “The Boy Who Overcame the Giants”; and the sweet classic which explains Indian Summer, “The Boy in the Land of Shadows.” MacMillan's many stories featuring rabbits makes the reader re-think their usual affability. All are interspersed with fantastic bold red and black block-printed illustrations by John A. Hall. 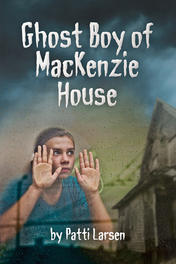 Ten-year-old Chloe Sutton arrives on Prince Edward Island from her home in Ontario after the tragic loss of her parents in a car accident. Her Aunt Laverne (Larry) is a doctor and her only relative able to take her in. Chloe isn't sure what to make of her aunt's big old house on the red cliff overlooking the Northumberland Strait, or the skinny, re …

A Foal, Five Kittens and Confederation

Award-winning children's author Deirdre Kessler has set her latest story in the late summer of 1864. Nine-year-old twins Gabriel and Grace help their parents run the Great George Street Livery Stables in Charlottetown. They are part of all the excitement as a circus comes to town and as politicians arrive by steamship from the Maritimes and the Pro …