This selection of books, which we highlight on Remembrance Day, runs the gamut from fiction to non-fiction to poetry to books for kids. Together, they represent our duty to not just remember, but to consider the path ahead.

A 2014 Giller Prize contender, Tell concerns itself with a community struggling to emerge from the trauma of WWI. It follows Itani's beloved Deafening, a novel also set amid the horrors, and feats of love and survival, of WWI.

A fascinating exploration of the way rhetoric—in communications and media—shapes how Canadians think of themselves as a nation and informs Canada's engagement in peacekeeping, war, and on the international stage.

Lesleyanne Ryan’s debut novel takes place over the five days following the fall of Srebrenica in 1995, and includes the perspectives of Bosnian civilians, UN Peacekeepers, Serbian and Bosnian soldiers, and a Canadian photojournalist.

Masham Means Everything, by Kanina Dawson

Kanina Dawson spent close to a year in Afghanistan in 2007 as a Canadian soldier. Her debut poetry collection takes the reader inside army camps, convoys, schools, markets, and villages to express the torment of Canada's war in Afghanistan.

Jean Vanier ruminates on what stops us from achieving peace, looking at individuals, communities, and nations for their part in the puzzle. He argues that peace is not just the work of "governments or armies or diplomats," and that we can all be "makers of peace."

Rilla of Ingleside, by L.M. Montgomery

First published in 1921, Rilla of Ingleside is "one of the only contemporary depictions in Canadian fiction of women on the home front during the First World War." Its heroine is Rilla Blythe, daughter of the indelible Anne Shirley. 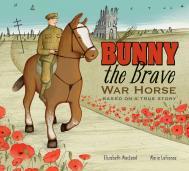 This one is based on the true story of a police horse named Bunny who went to the European front of World War I with two soldiers who were brothers. The jacket copy notes, "By focusing on the tender relationship between Bunny and the brothers and showing how he was able to provide comfort to the soldiers, the author makes the grim details easier for young readers to absorb." 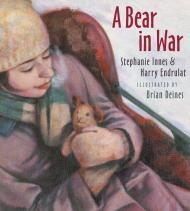 A Bear in War, by Stephanie Innes and Harry Endrulat, illustrated by Brian Deines

Another true story, A Bear in War is about how a beloved teddy bear was sent by a daughter to her father on the frontlines of WWI to help keep the father safe. The rest of the story evokes the stories of so many Canadians who lost loved ones in the war. The publisher notes—for teachers, librarians, and parents considering—that it is "a gentle introduction to war and to Remembrance Day."

Please see even more books about remembrance here and explore Julie Booker's list for of Books on War for younger readers.