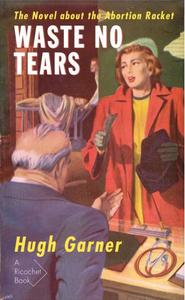 This story with its shocking expose of social evils, holds a forceful message for both sexes. Its strange mixture of power, tension and torment mark it as a human story that will thrill and grip all readers. Down in the depths of the city, washed by the murky waters of the dock-yards lies Skidrow, a dark den of intrigue and mystery, whose crumbling structures harbour the outcasts of the city.—From the 1950 edition

Hugh Garner’s second novel, Waste No Tears, hit drug store and train station spinner racks in July of 1950—then disappeared, never to see print again… until now. This is the latest release from Ricochet Books, a series of vintage noir mysteries edited by Brian Busby. The book's introduction, by Amy Lavender Harris, appears below.

Toronto the Good—the straitlaced “City of Churches” where public drinking was prohibited and playground swings padlocked on Sundays—receives a far darker rendering in Hugh Garner’s Waste No Tears, a novel set in the bars, bedrooms and abortion clinics of Toronto’s skid row district. Pitched as “The Novel about the Abortion Racket,” Waste No Tears peels back the city’s thin veneer of respectable civility to reveal a far seamier underside—albeit one with its own covert morality.

First published in 1950 by News Stand Library, an imprint of short-lived Export Publishing Enterprises, Waste No Tears was the first of two novels Garner produced for the then-burgeoning pulp market. Although he acknowledged writing the novel in a scant ten days, after learning Export would pay $400 cash upon acceptance, it was not only economic necessity that drew Garner to the pulps. The protagonists, places and plotlines that came to define so many of Garner’s stories—working-class men and women inhabiting Toronto’s poorer districts, torn between determination and self-destruction in their bid for a better life—bear a remarkable resemblance to parallel tensions in Garner’s personal life.

Tom Matterson, the novel’s narrator, is a chronic drunk whose twenty-year descent toward full dereliction is detailed in both social and spatial terms. Growing up ten blocks away from the city’s skid row among “decent people who believed in work, thrift, and of someday moving to one of the new residential districts that were springing up in the suburbs,” Matterson’s own family seems mired in place. His mother dies, his alcoholic father disappears—the family’s disintegration paralleling the decline of the street—and the miasma of skid row envelopes Matterson like a contagion.

The axis of his long descent is nearby Jarvis Street, a long north-south thoroughfare that for Matterson runs in one direction: downhill. Unnamed in the novel, Jarvis Street is where, after a decade of drinking and sexual dalliance, he finds himself caught up in a city-wide abortion ring that preys upon vulnerable young women. At the intersection of Jarvis and Dundas—the epicentre of skid row—is a seedy hotel where the plot culminates in a bloody scene of betrayal and blackmail that completes Matterson’s slide into the gutter and leaves him little more than a gibbering husk.

The real Jarvis Street held a lifelong attraction to Garner, as did the real Warwick Hotel, where he stayed while writing some of his first published stories. “Jarvis Warwick,” the pseudonym under which Waste No Tears was originally published, pays a perverse homage to the street, as does “The Stately Street of Sin,” an essay published pseudonymously inMaclean’smagazine.

In One Damned Thing After Another, the memoir published six years before he died, Garner describes Jarvis Street as mirroring Toronto’s social stratification, “getting lower each block in both altitude and social position” and housing the city’s most troubled inhabitants, especially “the whores, junkies and criminals who had made Jarvis and Dundas streets their corner.” That Garner—who grew up mere blocks from skid row and returned regularly to it in his writing—could describe the district so vividly in novels like Waste No Tears, reminds readers that Jarvis and Dundas was his corner, too.

In The Underside of Toronto, a sub-cultural study of the city published in 1970, sociologist John R. Seeley points out that “every city has a self-image, and every city’s self-image is almost precisely an image of what it isnot, what it isleast.” In this sense, it is the stark contrast Waste No Tears offers to the city’s self-image as “Toronto the Good” that makes it most remarkable not only as a work of fiction, but also as a cultural commentary.

While describing lechers, blackmailers and fly-by-night abortionists in scathing terms, Garner’s narrator remains sympathetic to those seeking their services, remarking of one woman willing to risk both mutilation and moral censure, “I admired her more at that moment than I had ever done before.” Like Garner’s protagonist, these women—“of all ages, from sixteen-year-old high school kids to married thirty-five-year-old women [...] some scared-looking while others were as unconcerned as if they were going to the dentist”—are caught up in circumstances only partly within their control. Garner’s protagonists—like Garner himself—are best interpreted as doing their best to deal with the difficult hands they have been dealt.

Although Morley Callaghan’s early Toronto novel Strange Fugitive—set in a long-vanished downtown slum district known as “the Ward”—often receives literary credit for exposing the city’s seedy underside, it is Garner’s paperback novels—Waste No Tears and Present Reckoning chief among them—that reveal how narrow is the line that separates “Toronto the Good” from its seamier shadow. It’s a line drawn precisely along Jarvis Street, a street that even now remains incompletely improved, the converted mansions and corporate towers at its north end still sliding irrevocably downhill toward the rooming houses and massage parlors where brutal necessities continue to be transacted in what remains of Toronto’s notorious skid row.

Amy Lavender Harris is the author of Imagining Toronto. Her next book, Acts of Salvage, explores what the contemporary city compels us to cling to or discard.