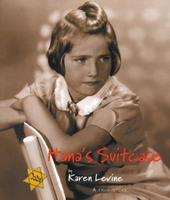 With Remembrance Day falling next week, our resident children's librarian, Julie Booker, shares some titles that reveal the realities of war to younger readers.

Whilst browsing through the stacks for this piece, I found a novel read aloud to me in grade five about a boy who escapes from a concentration camp. The whole plot came rushing back, along with the terror that something so horrifying could happen to a kid, a kid like me. I found myself asking: when should a child learn about war, real war? I've watched the expressions of eleven-year-olds listening to Hana's Suitcase by Karen Levine. It felt as if I were witnessing a loss of innocence.

I spent the weekend reading nine books about war, which I will rate on a scale of tears, beginning with those that didn't make me cry.

The Sky is Falling by Kit Pearson is the first in a trilogy set during WWII. When a German war plane crashes in their English village Norah and her brother, Gavin, are sent to Toronto to live far from danger. As "War Guests," Gavin is the favoured one, leaving Norah to struggle with the emotional separation from her parents and ambivalence at having to look after her sibling. I’d recommend this one for a grade three audience (and older).

The next two come with a confession. Keeping Secrets and Still At War are by Jean Booker, who happens to be my mother. I’d recommend them despite this. Like Pearson’s novel, the saga begins with a crashed German war plane and a strong female protagonist. Jean grew up loving L. M. Montgomery and I wonder if some of Anne of Green Gables’ constant tribulations were an influence. Booker's skill is suspense. Keeping Secrets is ultimately a mystery about an escaped POW in the English village, but the backdrop of conflicts include an injured father, money trouble, gas mask drills and math difficulty. The sequel, Still at War, features Ellen’s best friend's brother severely wounded in the war, villagers angry at the hiring of leftover German POWs, a mother who's not afraid to fight for her political views, as well as friendship troubles. These books work well for readers from grades three to six.

And in the Morning by John Wilson is an epistolary novel set during WWI. It skillfully captures the ambivalence of war in the form of a love story with references to Keats’ poetry and a surprise (tough) ending. There's also a mention of sex, so I'd recommend age 12 and up.

Shattered by Eric Walters is about a teen volunteering in a homeless shelter. He befriends a retired sergeant who struggles with alcoholism. Through their friendship he (and the young reader) learn about UN peacekeeping missions and the Rwandan genocide. This leads to curiosity about his nanny, who's cared for him his whole life. She tells him about the civil war in Guatemala, which was responsible for the "disappearance" of her family. This one is for readers beginning in grade five.

Reading Irene N. Watts’ Good-bye Marianne in graphic form, illustrated by Kathryn E. Shoemaker, gave me a slight reprieve from reading about the intensity of war. This is about a friendship between Marianne and a Nazi boy, Ernst, who doesn't know of her Semitic roots. During a time when signs were posted: "Dogs and Jews not allowed,"  Marianne gets expelled from school for her ethnicity. With a father in hiding and a mother struggling to take care of her, she is incensed by Ernst's Nazi-like comments, and ends up coming out to him. This book is a tense read; knowing the danger she's put herself in by expressing her anger (and ours) to a boy with misguided views.

The sequel, Remember Me (not in graphic form) picks up the story from where Marianne's mother puts her on the Kindertransport to London. Her billet is a very unhappy one and Marianne is desperate to reunite with her parents. The postscript tells us Watts herself was on the Kindertransport, which explains the empathetic quality of the writing. It's sad. Recommended for readers from grades four to six.

Even sadder is Clara's War. If you've read Hana's Suitcase, I’d recommend following up with this story of Terezin. A strong girl and her younger brother are sent to the death camp with their parents. Terezin was a showcase for the Nazis, used to misrepresent the reality of war camps during an International Red Cross Inspection. The children were allowed a strong education, taught by famous interned painters and writers. An opera was produced 55 times for Nazi audiences; the cast was periodically shipped out to death camps and replaced with newly recruited Jewish children. This one had me full-on crying, but I'd read it to an 11-year-old because the ending is more hopeful than the reality.

The saddest is Daniel's Story by Carol Matas, recommended for readers in at least grade five. Daniel's family is held in "ghettos" before being taken to Auschwitz. Daniel is a photographer, and his story is recounted through described photographs. He gets a chance to steal a camera from "Canada"—a nickname given to the storehouse of shoes and belongings taken from the gassed bodies before being sent on to Germans. (The prisoners named it that because it was bountiful and full of good things.) He ends up documenting the atrocities.