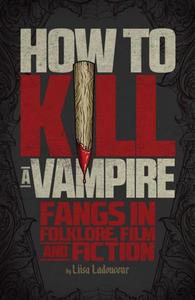 Happy Halloween! Though on the off chance your spooky night goes slightly wrong, we're bringing you an excerpt from the new book How to Kill a Vampire: Fangs in Folklore, Film and Fiction by Liisa Ladouceur. Part culture guide and all practical guide, Ladouceur lays out the rules of vampire engagement. Here, she outlines the uses of crucifixes, holy water and other sacred objects, dispelling myths and establishing facts citing sources from Bram Stroker to Buffy.

Traditionally, vampires fear religious symbols. The sacred objects most commonly used for protection are Christian: water blessed by a priest, the cross or crucifix and the holy Eucharist or “Host,”—a consecrated unleavened bread or wafer meant to represent the body of Jesus Christ. These are key items in any vampire killing kit and have been used to great effect by many a fictional slayer, sometimes to kill but mostly to repel or maim.

In Stoker’s Dracula, the crucifix plays a significant role in helping the characters evade vampire attacks. Early in the story, a superstitious gypsy forces a rosary on businessman Jonathan Harker for protection after hearing he is en route to visit Count Dracula at the dreaded Castle Dracula; later, the Count is, in fact, repelled by the sight of it. Professor Van Helsing includes the crucifix in his list of things that vampires hate, claiming it will weaken any powers they may possess, and he wields one several times throughout the novel. There’s no evidence that Stoker got the idea to use the crucifix to ward off his vampires from folklore. Rather, it seems he invented the plot device from the not-then-uncommon concepts that vampires are agents of Satan and that the crucifix has sacred powers. 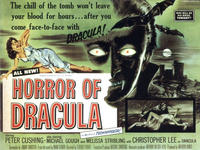 In the Hammer adaptation Horror of Dracula, Van Helsing spells out in his journal that the crucifix represents the “power of good over evil.” In the film, the professor uses an oversized silver cross from a rosary to repel the vampire Lucy; when pressed against her forehead, it burns her like acid, and she flees. (This has become a prominent use of the crucifix in movies.) He then gives it to the child Tania for protection, and later places one in Dracula’s coffin to prevent him from returning to rest there. In the final confrontation with Dracula, Van Helsing, finding himself in a showdown without any weapons, grabs two nearby candelabras and holds them up in the shape of a cross, which repels the Count. This scene created a visual trope since adopted by many other cinematic slayers: since then, we have seen characters use whatever is at hand from baseball bats to tongue depressors—even two of their own fingers—to form an impromptu cross. Van Helsing points out that the crucifix can also be an investigative tool used to reveal someone who is a vampire, or was recently bitten by one. In the Italian horror classic Black Sunday (1960), the vampire-witch Asa attempts to fool a doctor into slaying the maiden Katia (whom she resembles) by claiming she is a vampire, but when he notices a crucifix resting safely around Katia’s neck, he realizes there is some mistaken identity afoot and stops short of staking the wrong woman.

Bram Stoker’s Dracula also made good use of the Eucharist wafer, which was more likely to have been used in real life against vampires. As Montague Summers describes in The Vampire, His Kith and Kin, wafers have been found in the tombs of saints such as St. Basil, St. Othman and St. Cuthbert, and even modern-day Greeks were known to place one between the lips of the dead at burial, as protection against vampirism. In Dracula, Professor Van Helsing imports host wafers from his parish in Amsterdam to London in preparation to fight off the vampires; he uses them first to make a putty to seal up Lucy’s tomb “so that the undead may not enter,” then later places them in a protection circle around Mina to thwart Dracula’s hypnotic advances. (A scene dramatized to great effect in Francis Ford Coppola’s 1992 film Bram Stoker’s Dracula.) Despite all this, the sacred wafer defence never really caught on in popular culture as much as the cross or crucifix, probably because that’s a much more dramatic and recognizable prop. Plus, the Eucharist was in many ways replaced by the use of another Christian sacramental: holy water.

The use of holy water against vampires was not nearly as common in folklore as the crucifix or sacred Host. However, it has been eagerly adopted by film and fiction writers, who use it not so much to protect the living but to harm the undead. Like garlic, it’s generally something that burns vampire skin like acid (Asher, a master vampire in the Anita Blake: Vampire Hunter novels, is severely scarred on one half of his body and face from being tortured with it) or it acts as poison if ingested (in the Buffy episode “Helpless,” Buffy tricks a vampire into washing down his prescription pills with a glass of holy water). One of the more creative applications of it was in the movie adaptation of Stephen King’s ’Salem’s Lot (1979), where vials of holy water are used as a detection device, their glow indicating the presence of vampires. The good thing about holy water is that it’s easily available. Simply visit your local church and steal some (as seen in The Lost Boys) or have whatever priest or other man/woman of God you’ve written into your fictional team bless any water on hand. Presto. (See 1996’s From Dusk till Dawn.) On the negative side, it might only work if you actually believe in it.

What if the vampire isn’t Christian? The Fearless Vampire Killers saw a Jewish vamp laugh off an attempt to repel him with a crucifix: “You’ve got the wrong vampire!” But increasingly, holy objects from other faiths are being employed. The BBC Television series Being Human (which premiered in 2008 in England and was adapted for North America in 2011) has rules around the Star of David. The Jewish symbol can repel a vampire attack, although with the caveats that the bearer must not feel any affection for the vampire or be outnumbered by them, else its effectiveness is diminished; the oldest vampires are also immune to religious relics. And in the young adult urban fantasy book series The Mortal Instruments by Cassandra Clare, vampires are vulnerable to religious symbols from whatever faith they were as humans.

The element of faith is key to the effectiveness of sacred objects against vampires. This is not something we generally see for other tactics—decapitation will do the job whether you believe it will or not. Anne Rice, a Christian herself, created a world where religious icons have no power. In the beginning of Interview with the Vampire, Louis calls the “rumour” that his kind cannot look upon a cross “sheer nonsense.” While other authors have continued to embrace and expand upon the use of the sacred against vampires (one creative recent story is “The Greatest Trick” by Steve Vernon, in which a man repels “Jedi-Lugosi mind control tricks” by wearing a set of contact lenses blessed by three holy men), the influence of Rice and her bestselling Vampire Chronicles series has loomed large over supernatural storytelling for decades, with Christian icons appearing less and less often, a reflection of the ever-diminishing influence of religion in modern mythmaking.

Excerpt from How To Kill a Vampire: Fangs in Folklore, Film and Fiction by Liisa Ladouceur © 2013 by ECW Press. Used with permission from the publisher.