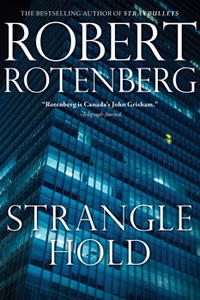 About the book: Bestselling author Robert Rotenberg is back with Stranglehold, his most shocking book yet, featuring Detective Ari Greene in the fight of his life. It’s just after Labour Day and the city is kicking back into gear. All eyes are on the hotly contested election for Toronto’s next mayor and crime is the big issue. Greene is no stranger to the worst of what the city has to offer, but even he is unprepared for what happens next when he stumbles upon a horrific homicide...

What a boring Monday , Awotwe Amankwah, courtroom reporter for the Toronto Star, thought as he flipped through the trial list on the centre hall desk at the 361 University Avenue Courthouse. For the last two months there’d been nothing decent to write about thanks to the court’s annual summer break –when all the well-heeled judges were up north at their family cottages. He could barely remember the last time his byline had appeared on the front page. And now the film festival was monopolizing half the ink in the paper with paparazzi crap.

The Star’s new editor, Barclay Church, a British transplant who lived for stories filled with sex and scandal, would have no interest in the handful of run-of-the mill crimes on this court docket: a stabbing; two shootings; a dead body found in a ravine; a real dumb drug-importing case (a bunch of boxers from the islands who shipped the stuff up in their gym bags); and the inevitable sexual assault cases. One pitted a stepfather against his stepdaughter, another featured a drunk, minor-league hockey player versus a failed actress-turned-waitress.

All the usual suspects. Strictly six-paragraph, page-eight filler. None of this was going to help Amankwah reboot his career. He needed the ink to earn a promotion so he could start doing feature stories. That would give him more exposure and more money to maintain his support payments so he could keep seeing his two children. For the last few years he’d been doing extra overnight shifts in the radio room to make his nut. And now, with the hotly contested election for city mayor about to start, only the biggest and sexiest crime stories had a chance of not getting buried, if not cut out altogether.

His best bet this morning was Courtroom 406, where Seaton Wainwright, the high-flying filmmaker who was charged with scamming investors out of millions, was scheduled to make an appearance. Last Wednesday things had heated up when Phil Cutter, Wainwright’s aggressive, bald-headed lawyer, had tried to change the bail conditions to allow his client to go to New York for five days to “work on some deals he planned to sign during the Toronto Film Festival” before his upcoming trial.

Jennifer Raglan, the lead Crown on the case, had produced copies of Wainwright’s Visa card that showed the last time he’d been in the Big Apple, he’d hired a series of high-class Manhattan hookers and charged them to his company as “promotion.”

The judge, Irene Norville, no shrinking violet herself, was not impressed.

She gave Wainwright forty-eight hours in New York, ordered him to be back in court this morning at ten, and rushed off the bench. Wainwright, who was about six feet ten and weighed close to three hundred pounds, ploughed out of the courtroom. When Raglan walked into the hallway with the other lawyers and reporters, he accosted her. “Why the fuck are you trying to ruin my life,” he shouted. “Do you know how many jobs I’ve created in this town?” Raglan was maybe five six and thin, but she stood her ground like a halfback confronting a charging linebacker. “Maybe you should start thinking above the shoulders,” she said, “not below the waist.”

She waved them off and turned on Cutter. Her eyes flashed with rage. “Your clown of a client comes near me again, and I’ll have him in cuffs so fast it will make his fat ass pucker up like the scared chicken he really is.”

She stormed off, leaving everyone standing in stunned silence. Raglan was a well-respected prosecutor and known for keeping her cool in tough situations.

“Where’d that come from?” Amankwah asked the other reporters. Zach Stone, the Toronto Sun writer who was the veteran of the crew, didn’t seem surprised. “That’s the old Jennie,” he said.

“Not many people know this, but she started out as a cop.”

“Long time ago,” Stone had said in his usual cryptic tone. He had begun his career at the old Toronto Telegraph. When that paper closed he spent a few years at the Star, then moved to the Sun a long time ago. He had a million sources and even more secrets. It was clear he wasn’t going to say anything more.

Amankwah knew there would be no fireworks this morning between Raglan and Wainwright. Last week she’d told Norville she was taking Mondays off until the trial began, next week, and she wouldn’t be here today.

Five minutes before ten o’clock, Amankwah watched the junior lawyer on the case, a beautiful young woman named Jo Summers, come into court and set herself up at the Crown counsel table. There was no sign of Wainwright, who always made a grand entrance at the last moment, angering Norville more each time, but was never technically late.

Cutter scurried in just before ten. His bald pate gleamed with sweat. He strode over to Summers and whispered in her ear. She looked around the empty courtroom, frowned, and shook her head, like a vice principal frustrated yet again with a difficult pupil.

Watching Cutter wipe the perspiration from his brow, Amankwah could tell that this time there’d be no dramatic, last-second entrance by his mini-moviemogul client.

There was a loud rap, and the oak door at the front of the courtroom swung open. Norville swooped in, followed by her robed registrar, an older gentleman named Mr. Singh. A former railway engineer in India, Singh had been a key witness in a murder trial a few years earlier and had become enamoured with the court process. Now he worked here. Courteous, efficient, and always with a smile on his face, he loved to chat with people and everyone loved to talk to him. .

She ran up to her elevated dais, plunked herself down in her high-backed chair, put on a pair of plain but stylish black glasses, and scanned the empty seats in front of her. Her eyes fixed on Cutter.

Cutter, usually a fearless advocate, bowed his head. “I haven’t heard from him all morning.” He pulled out his cell phone. “Mr. Wainwright always e-mails and texts me about ten times a day. But he’s not responding.”

“Tell me that at least he came back from his Manhattan adventure.”

Cutter nodded. “Yes, Your Honour. I saw him at my office last night. But this morning, I have no explanation. This is not his usual MO.”

She looked like she wanted to spit at him, Amankwah thought. Now, that would be a front-page story.

“If by his usual MO you mean arrogantly striding into my court at exactly ten o’clock, not a second earlier, I have to agree with you.” She turned to Summers.

“Bench warrant,” Summers said. “Time to send the accused a message that this isn’t just another appointment on his busy schedule. The trial starts next Monday, let him have a week in jail to think about what it means to get to court on time.”

“Your Honour, I’ll admit my client regularly tests the patience of the court,” Cutter said, jumping in. “Last night he assured me he’d get here early.” He held up his phone. “His personal assistant hasn’t heard from him either. An hour ago, I had my partner, Barb Gild, rush over to his condo. She called five minutes ago. The concierge said that Mr. Wainwright left at seven p.m. last night and didn’t come back. I met with him at seven-thirty. He gave me his passport, as you requested he do when he got back from New York. He left my office at eightthirty and that’s the last anyone has heard or seen of him.”

Norville yanked off her glasses and let them clatter on her desk. “Mr. Cutter, what do you want me to do?”

“Give me one day. We’ll do everything we can to find him. I’m confident there will be some explanation for this.”

Norville squinted at the big clock on the sidewall above the jury box. She sighed. “For the record. It is now 10:09 a.m. on September tenth. This court is adjourned until one o’clock. Mr. Cutter, if your client isn’t standing right beside you this afternoon, I’m going to issue a bench warrant. And he’ll sit in jail until this trial is over. Got it?”

Amankwah had never seen Cutter look so humble in court. “And, Mr. Cutter,” she said.

“If I were you, I’d pray very hard that he hasn’t left the country.”

Out in the hallway, Cutter marched away, tearing off the white tabs around his neck and unbuttoning the top button of his too-tight white court shirt. The slap of his black wingtip shoes echoed off the marble walls with a loud clang sound. Amankwah caught up and walked with him step for step.

“Where do you think Wainwright’s gone?” he asked.

Cutter shrugged. “How the fuck should I know? This job would be a hell of a lot easier if we didn’t have clients.”

“What are you going to do to find him?”

“Call in Dudley Do-Right and the Mounties,” Cutter said. He got to the frosted-glass door of the barristers’ lounge. A prominent sign above the wood handle read: lounge strictly reserved for members of the law society of upper canada. clients and media are strictly prohibited .

He yanked the door open and disappeared.

Amankwah stood alone in the empty hallway. He looked down at the pathetic few lines he’d scribbled down in his reporter’s notebook. Shit. A dud story on a dud Monday morning.

From the book Stranglehold, © 2013, by Robert Rotenberg. Published in 2013 by Simon & Schuster. Reprinted with permission of the publisher.