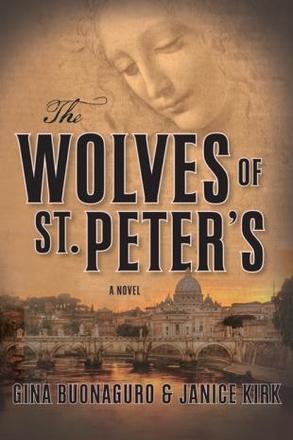 The authors of The Wolves of St. Peter's on the Vatican's dramatic appeal.

As the recent papal conclave showed, the Vatican knows how to put on a good show. The suspense was nail-biting, and not just for Catholics. It seemed like everyone was glued to their TV sets and computer screens. The secrecy: Turn off those twitter feeds! The ancient rituals: White smoke or black? The speculation: Canadian, African, or Italian? But as much as we wanted to know who the next Pope would be, we didn’t want the show to end. It was Survivor Vatican and we were hooked.

The outgoing Pope Benedict XVI insisted he timed his departure so we’d have a new Pope for Easter—but we have to wonder if the Vatican made a deal with Showtime to fit the conclave in before the start of the third season of their hit series The Borgias. It would have been a terrible dilemma to have to choose between these two shows: “Tonight should we watch The Borgias—Season 3 or The Vatican—Season 266?” Maybe we would confuse the two as the sets and costumes (and some of the attitudes) haven’t changed much in 500 years.

Is this what continues to fascinate us and so many others about the Vatican? This sense of it as not-quite real, a theatre piece or historical drama up there with the best cable has to offer?

Our addiction to The Vatican started with Pope Benedict in Season 265, while we were researching another pope who died exactly five hundred years ago at the end of Season 216: Pope Julius II (1503-1513), who reigns during the time of our new novel The Wolves of St. Peter’s. As we filled in the details of the Renaissance pontiff’s life, we traded modern-day Season 265 Vatican headlines: Papal usher, chorister linked to gay prostitution ring; Bones found in gangster tomb as Vatican mystery deepens; 'Vati-leaks' scandal widens as pope's butler vows to help investigator… Then, in a season finale no one saw coming, Benedict stepped down—the first pontiff to do so in 700 years! And while we would tag these stories as “nobody could make this stuff up,” we often wished someone had—as behind every cover-up of an abusive priest were very real ruined lives.

The pontiffs of yesteryear were much more notoriously theatrical than Benedict. We found it hard to embellish on what history told us of Julius, who is pope when our hero, Francesco, watches the body of a courtesan being pulled from the Tiber River. Francesco’s search for the killer takes him from the dark underworld of Rome right up to the cardinals and Pope Julius himself.

Nicknamed Il Papa Terribile or the “Fearsome” or “Terrifying” Pope, Julius was known for his violence, temper, and foul language. He was also known as Il Papa Guerriero—“The Warrior Pope.” Taking the name of Julius Caesar, he saw himself as Emperor of both Rome and its Church. At that time, the Church’s territorial ambitions extended beyond the Vatican, and Julius was keen to recover the lost Papal States. Unlike any pope before, he rode into battle alongside his men and—given the scarcity of iPods in the 16th century—took the Sistine Chapel Choir with him.

Julius is also hailed as a patron of the arts, and he pursued his plans to rebuild St. Peter’s Basilica and redecorate the Sistine Chapel with the same ferocious determination as he pursued his wars. When Michelangelo refused to paint the Chapel and fled Rome, Julius sent his papal assassins to drag him back.

And as if what we know for certain about Julius isn’t fearsome enough, unholy stories about him still abound. He had a number of mistresses and fathered three girls. He contracted syphilis, which had just made its way to Italy from the New World. Another story concerns the nature of his relationship with a young boy, who some say was the hostage of an enemy. This boy becomes the basis for Agnello in The Wolves of St. Peter’s.

Showtime’s The Borgias picks up on another rumor concerning Julius, when he was still only Cardinal Guiliano della Rovere. A lifetime of pursuing the papacy has left him as frustrated as Wile E. Coyote in pursuit of the Road Runner. Having exhausted all other avenues to oust the Borgia Pope Alexander VI, he spends Season 2 plotting to poison him. Whether or not Julius actually murdered him (two other theories point to accidental poisoning by Alexander’s son or, quite mundanely, malaria), it was because of Julius that the Borgia name became synonymous with poison.

So while we wait to see what shenanigans the Borgia pope gets up to in Season 3, Pope Francis of The Vatican—Season 266 is swiftly proving to be very interesting, what with washing the feet of juvenile offenders on Holy Thursday, eschewing the traditional papal vestments, and refusing to move into the palatial apartments in favor of staying in a modest guest house. Where can this be going? We’d like to give the scriptwriters a few twists that don’t involve the use of poison. For while the popes have come a long way since the days of Season 216, there’s still definitely room for improvement.

How about this season the Vatican finally recognizes women as equals and gives its blessing to gays? How about bringing all abusive priests to justice and closing that sordid chapter once and for all? It would certainly make the ratings soar, and we could enjoy the spectacle without guilt. Alas, we think we may have to wait a few more seasons for that to happen. Perhaps The Vatican—When Hell Freezes Over.

Gina Buonaguro and Janice Kirk live in Toronto and Kingston, Ontario, respectively. After meeting in a French class in Kingston, they became writing partners and co-authors. The Wolves of St. Peter’s is their third novel. Learn more at http://sidewalkartist.blogspot.com/, “like” them on Facebook, or follow them on Twitter @JaniceandGina.