Our resident Children's Librarian Julie Booker brings us her best picks from the stacks.

When I start to feel anxiety regarding the environment I like to quote the Mole Sisters: “Sometimes it’s important to do nothing.” "Nothing" involves being open to the natural world and, for the Mole gals, curiosity always leads to serendipity. It’s the perfect message for a five-year-old. Like the time the rain kerplunks into the siblings’ burrow creating a gleeful spa-like puddle. Most days, though, the sisters venture out, turning right “instead of always going left” and end up making a kite from dandelion stalks or swings from two blue eggshells. Or they stumble upon what look like the caves of Lascaux, as in the final story of The Complete Adventures of The Mole Sisters. The best way to appreciate Roslyn Schwartz’s Mole Sisters is to read the entire collection. 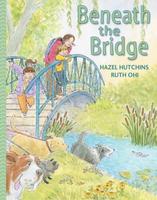 Beneath the Bridge by Hazel Hutchins works for the eight to nine-year-old crowd.  A paper boat gets launched in a forest stream by a small boy. Each page invites a kind of Where’s-Waldo-quest. Spot the toy boat! Where’s the purple-sweatshirted boy now? Find the bridge. (It was a twig! Now it’s a suspension bridge!) Ruth Ohi’s illustrations are a visual lesson in the movement from rural to urban communities, accompanied by rhyming text that expands to include the cacophony of people, industry, merchants, transportation. The final image of the toy boat on a barge heading out to open sea launches another conversation. 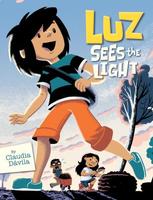 My pick for 10 to 12-year-olds is the graphic novel, Luz Sees the Light by Claudia Dávila. Luz’s plan to buy the latest name brand running shoes at the mall are thwarted by a city blackout. With the help of a mysterious next door neighbour and Gord, the local environmentalist, she realizes the expensive runners’ carbon footprint. Luz reclaims some neglected community space, revitalizing its dead earth with kitchen scraps and worms. There’s even simple instructions for making soil from compost at the end of the book. (In Dávila’s second book, Luz Makes a Splash, there are similar instructions for making a graywater filtration system.)

For the teen crowd, The Never Weres by Fiona Smyth portrays a graphic dystopian future where babies are no longer being born. The world is forever grey, polluted and over-commercialized, causing people to wear mouth masks outside. A worldwide virus has eliminated childhood; the majority of the population is over age 60. Robot companions and cloning seem to be the only solution. Hope comes for the three protagonists in the form of graffiti tags and a dementia’ed artist who accidentally reveals some truths.