This week's Lit Wish List is Books for Kids Who Love Books, and we knew Holly Kent from the Canadian Children's Book Centre would the perfect person to get this Lit Wish List started. The five books she has selected below cross a wide range in terms of genre and reading levels, which means there is something here for every young reader in your life. And if there is an essential Canadian kids' book that you feel is still missing, please add your picture books and/or novel suggestions in the comments below. 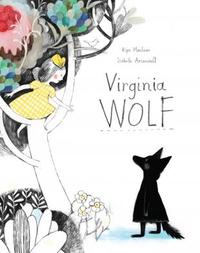 Virginia Wolf, written by Kyo Maclear and illustrated by Isabelle Arsenault: A touching story loosely based on the relationship between author Virginia Woolf and her sister, painter Vanessa Bell. Nominated for a GG, this one is a CCBC favourite.

About the book: Vanessa's sister, Virginia, is in a "wolfish" mood—growling, howling and acting very strange. It's a funk so fierce, the whole household feels topsy-turvy. Vanessa tries everything she can think of to cheer her up, but nothing seems to work. Then Virginia tells Vanessa about an imaginary, perfect place called Bloomsberry. Armed with an idea, Vanessa begins to paint Bloomsberry on the bedroom walls, transforming them into a beautiful garden complete with a ladder and swing "so that what was down could climb up." Before long, Virginia, too, has picked up a brush and undergoes a surprising transformation of her own. Loosely based on the relationship between author Virginia Woolf and her sister, painter Vanessa Bell, Virginia Wolf is an uplifting story for readers of all ages.

Alligator Pie: Classic Edition by Dennis Lee: What can we possibly say about this classic? We’re so happy that HarperCollins Canada is reissuing Lee’s books for children.

About the book: "You can almost hear the skipping rope slapping the sidewalk,” wrote Margaret Laurence of Dennis Lee's timeless poetry collection Alligator Pie. One of the first illustrated books published about Canadian children and featuring Canadian place names, Alligator Pie established Dennis Lee's reputation as “Canada's Father Goose” and has sold more than half a million copies since its publication in 1974. This classic edition, featuring Frank Newfeld's instantly recognizable original illustrations and book design, includes childhood favourites such as “Willoughby Wallaby Woo,” “Wiggle to the Laundromat” and “Skyscraper"?

Between Heaven and Earth by Eric Walters: The first book in Orca’s SEVEN series. Each book is written by a different Canadian author. Here is where to start with this fantastic series!

About the book: DJ is David McLean's eldest grandson, so it stands to reason that he be the one to scatter his beloved grandfather's ashes. At least that's how DJ sees it. He's always been the best at everything—sports, school, looking after his fatherless family—so climbing Kilimanjaro is just another thing he'll accomplish almost effortlessly. Or so he thinks, until he arrives in Tanzania and everything starts to go wrong. He's detained at immigration, he gets robbed, his climbing group includes an old lady and he gets stuck with the first ever female porter. Forced to go polepole (slowly), DJ finds out the hard way that youth, fitness level and drive have nothing to do with success on the mountain—or in life.

Stones for My Father by Trilby Kent: The winner of the 2012 TD Canadian Children’s Literature Award!

About the book: Corlie Roux’s farm life in South Africa is not easy: the Transvaal is beautiful, but it is also a harsh place where the heat can be so intense that the very raindrops sizzle. When her beloved father dies, she is left with a mother who is as devoted to her sons as she is cruel to her daughter. Despite this, Corlie finds solace in her friend, Sipho, and in Africa itself and in the stories she conjures for her brothers. But Corlie’s world is about to vanish: the British are invading and driving Boer families like hers from their farms. Some escape into the bush to fight the enemy. The unlucky ones are rounded up and sent to internment camps. Will Corlie’s resilience and devotion to her country sustain her through the suffering and squalor she finds in the camp at Kroonstad? That may depend on a soldier from faraway Canada and on inner resources Corlie never dreamed she had….

The Dead Kid Detective Agency by Evan Munday: We just learned that this is the first of a seven book series and couldn’t be more excited. The book is as smart and funny as it is educational.

About the book: Thirteen-year-old October Schwartz is new in town; short on friends and the child of a clinically depressed science teacher, she spends her free time in the Sticksville Cemetery and it isn’t long before she befriends the ghosts of five dead teenagers, each from a different era of the past. Using October’s smarts and the ghosts’ abilities to walk through walls and roam around undetected, they form the Dead Kid Detective Agency, a group committed to solving Sticksville’s most mysterious mysteries. So when the high school’s beloved French teacher dies in a suspicious car accident, it provides the agency with its first bona fide case, putting them in the midst of a murder plot thick with car chases, cafeteria fights, and sociopathic math teachers, and sending them on an adventure that might just uncover the truth about a bomb that exploded 40 years ago.

*This list previously featured Days That End With Y by Vikki Vansickle, which is not due out until next year. Still, it's one to watch for!

Holly Kent is the Sales and Marketing Coordinator for the Canadian Children’s Book Centre, a national, not-for-profit organization dedicated to encouraging, promoting and supporting Canadian books for young readers.

Of course, this list is just a starter. What other picture books and YA fiction belongs here? Add your suggestions in the comments below, or on Facebook or Twitter (#GiveCDN). Or start a list of your own—just remember to add the tag #GiveCDN and your list will be featured on our Lit Wish List page!