“Where do you find your stories?” is probably the most common (and least welcome) question a writer is asked. It has been said that Shakespeare wrote about every story that ever existed, so that leaves it to the rest of us to come up with variants on his tales. Sometimes these spring from pure imagination, and sometimes they originate in life. And sometimes the best place to track down true life is in the pages of that disappearing dinosaur—the newspaper.

My novel Busted Flush is the story of a man, Dock Bass, who—while renovating an old farmhouse near Gettysburg, Pa—stumbles upon a motherlode of Abraham Lincoln-related artifacts. Bass is then inundated with offers for the stuff, the offers coming from collectors, hustlers, dealers and other assorted ne-er-do-wells. I first came up with the idea after hearing that Sotheby’s in New York auctioned off JFK’s golf clubs for the sum of $770,000. I started thinking about the world of collectibles—and about the desire of certain people to own things connected, however tenuously, to a historical figure or even a minor celebrity. I attempted to tailor the JFK story to the Canadian landscape but I found, alas, that nobody really cared about John Deifenbaker’s three wood. So I settled on Honest Abe.

In Red Means Run, there is a famous record producer who is accused of killing a young woman, and—in a subplot—there’s an extremely wealthy thoroughbred horse owner in upstate New York who is charged with the abuse and starving of his own horses. Both of these stories were lifted from the newspaper.

Crow’s Landing begins on the Hudson River, where a luxury ChrisCraft boat is making a meandering trip toward Albany. By the end of the first chapter, the boat has been raided in the wee hours by the local cops. During the course of the raid, a steel cylinder containing something is tossed overboard. The steel cylinder becomes the McGuffin of the story.

(From the occasionally reliable folks at Wikipedia: “In fiction, a MacGuffin (sometimes McGuffin or maguffin) is a plot device in the form of some goal, desired object, or other motivator that the protagonist (and sometimes the antagonist) is willing to do and sacrifice almost anything to pursue.)

I came up with this storyline as a result of a conversation I had with a Toronto cop a few years ago. Apparently just such a boat was carrying a cylinder of cocaine into the Toronto Harbour a few years before that. The cops raided the vessel and the dope went overboard. It has never been found. The story rattled around in my brain for a few years and eventually began the genesis of Crow’s Landing. Of course, more than just one little nugget from a police blotter is required for a novel. The tale has to be expanded, embellished, polished—and fitted along the line with a duplicitous drug dealer, a crooked cop, a tough single mother and a murderous Russian. Oh—and one mule-stubborn farmer named Virgil Cain.

In short, stories can be found anywhere—on the news, in the grocery store, at the farmers market. A courthouse is a good place to look, and so is your neighbourhood bar. Though of course, the stories you hear in those last two venues might not be entirely true.

That ain’t a bad thing. 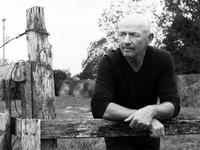 Brad Smith was born and raised in southern Ontario. He has worked as a farmer, signalman, insulator, truck driver, bartender, schoolteacher, maintenance mechanic, roofer, and carpenter. He lives in a eighty-year-old farmhouse near the north shore of Lake Erie. His novel One-Eyed Jacks was nominated for the Dashiell Hammett Prize.