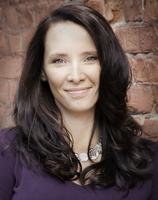 How do you fit into a new country when you don't speak the language, your motherland is in upheaval, and you're teenaged-girl body is as well? In fact, you're a "giant."

Giant, by Aga Maksimowska, presents a child’s perspective of revolution—Poland in 1989—a traumatic time of change mirrored in 11-year-old Gosia's body and the absence of her migrant-worker parent, a mother who works in Canada cleaning houses and a father who ferries Asian goods to Europe.

Gosia is transported quite suddenly to Canada to live with mother. There, she undergoes puberty as Poland struggles with its own transformation. Gosia feels neither Polish nor Canadian, yet her identity is weaved from the threads of multi-ethnic influences, both old and new. It's a quintessentially Canadian story.

"In Giant, Aga Maksimowska has created a heroine who is bold, fiercely funny, and as unforgettable as the Polish uprising to which she is a witness. A story of emancipation so heart-breakingly hilarious, you won't know whether to laugh or cry."Helen Humphreys (The Reinvention of Love and Coventry)

Aga Maksimowska: No, I don't think the message shifts. Giant is about a profound desire to belong, to feel good in one’s skin, and to be good at something. I'd say those are all universal human needs.

I was looking at a childhood photo of myself the other day. I'm a new mom and perhaps I was subconsciously seeking similarities between myself and my daughter, who looks nothing like me. It struck me that I was a really cute kid. This is not meant to illustrate my conceit, but how wrong we can be about ourselves when we were kids and teenagers. I thought I was ugly and awkward and totally undesirable to everyone, a typical distorted self-image. I was none of those things. I was a regular, imperfect kid. This happens to all of us as we age: we want to go back in time and tell our kid selves that we are cute and adorable and loved and entirely misguided about ourselves.

Julie Wilson: Talk about your young protagonist, Gosia, and, in particular, her observation that her family's 10th-floor apartment in Gdansk is actually 11 floors up, the ground floor is zero. She says, "Polish people have a lot of trouble starting at one. It’s always nothing first."

What's the statement in this, and how does it progress?

Aga Maksimowska: Gosia has seen many people she loves move away, disappear, go elsewhere seeking a better life. They don't come back thrilled, rich, and enlightened. Most of them don't come back at all. They send word of disappointment, disillusionment, and sacrifice. She feels like they keep starting from zero because they can't stay put and build on what they already have. In Part II of the novel, after the move to Canada, she observes these realities of immigration firsthand, which confirms her cynicism. It's not just Polish people, of course. She says this because as a Pole in a Poland that's frequently abandoned by her nationals, Gosia doesn't have a very high regard for her nationality. She thinks there must be something fundamentally wrong with Poland and with Polish people if they leave their homeland in such numbers.

In many ways, she thinks she's started from zero when she moves to Toronto. If she were a mathlete, which she isn’t, she'd comment that she actually starts in the negative numbers in Toronto because she feels she's lost more than she's gained. Eventually she progresses and, like most teenagers, blossoms in high school and acquires most of the things she longs for: identity, skill, fitness. Belonging, however, remains up in the air.

Julie Wilson: Up in the air being in the positive numbers. It's a coincidence of late that I'm reading a lot of stories that speak to this idea of not even being at zero, or the starting line, and how closely it impacts identity.

So, how about identity? Gosia leaves Poland to come to Toronto, and ultimately leaves Toronto, bound for the west coast. Do you believe it's necessary to live in one place in order to, air quotes, belong? I'm thinking about Gosia's mother, as well, and how she went from being a teacher to cleaning homes. Is there anything about being a parent or caregiver that changes how we form identity that maybe a youth has yet to comprehend?

Aga Maksimowska: What comes to my mind is travel. When you travel you're the same person, it's the background that changes. Hence, different things about you stick out in different places. To give an oversimplified example of what I mean, at 5'10" I felt freakishly tall while travelling in India, while in the Netherlands—for the first time in my life—I felt average. The wonderful thing about living all over the world is that you get to reinvent yourself and alter your identity. This reinvention of one's self can actually make you feel like you belong more, belong to that place that you are choosing as your new home. Of course other factors have to be in place for this to work, mainly self-confidence, which comes from feeling good in one's skin and being good at something. It's true that Gosia can only leave Toronto because of that confidence and the skill she's acquired.

About being a parent, I'd say that the role may make you feel better about yourself, or worse. If you're a good parent and the relationship that you've forged with your children is a healthy one, this should certainly make you a more confident person, it should strengthen your sense of belonging. It's strengthened mine, for sure. I love that there are two people in the world who love and need me, think of me, miss me. Possibly narcissistic, but true. I think this holds true for Gosia’s mother. As adventurous, bold and rash as she is, being a mother is a huge part of her identity. Her children are more important to her than her professorial job or her homeland.

Julie Wilson: Is there a difference between—more air quotes—identity and how we form character? For instance, Gosia is bullied at school for being bigger than the other kids. When you were writing Gosia, how did her perceived difference manifest itself to you? Also, is this where the humour in the novel stems from, a need to laugh at the absurdities of life, certainly the circumstances we can't change?

Aga Maksimowska: The simple answer is that character is built through overcoming obstacles. Gosia endures years of bullying, thus she becomes a stronger person, one with good moral fibre. What was more interesting to me while writing Giant, however, was the idea that we replicate our bullies' behaviours along the journey to overcome them. Gosia is also a bully. She's a victim of violence but she also enacts plenty of her own. This contradiction is what results in humour, I think, because those can be such absurd moments. Kids are so extreme, so polarized in their feelings and reactions, that oftentimes the only way to navigate those polarities is via humour.

Julie Wilson: You share some key similarities with Gosia. You were both 11-years-old when you moved to Canada, and your grandparents were your primary caregivers. Which details of your world fleshed out that of the Gosia's?

Aga Maksimowska: Place is vital in Giant. It's another protagonist. I set the story in places I know intimately, like Gdańsk and its suburb of Morena, for example. After working on the book on and off for five years and writing so much about Gdańsk and its people, its history, its streets, I made myself extremely homesick. This is odd because I haven't considered Gdańsk "home" for a really long time. As my original home, Gdańsk affects how I interact with Toronto, but Toronto is "home".
In the process of writing, researching, going back to see it all again firsthand, I learned more about Gdańsk than I ever knew while I actually lived there. I'm all nostalgic about it now and want to go back more often. I find myself thinking about it a lot more than I ever did before. But I think there's more to this than just Giant; being a parent makes you want to keep your roots a bit closer, to eventually introduce them to your child.

Julie Wilson: I've only just learned that your birth name is Agnieszka, something that you've said "tumbled in the mouths of my new teachers and classmates like sneakers in a clothes dryer." A giant of a name, perhaps? Anything to that?

Aga Maksimowska: Ha! I suppose. My name definitely stuck out in Canada, like giants do in crowds. In Poland, my name was fairly plain so it blended right in. But in Canada, when teachers took attendance, I learned to put my hand up as a response to silence. No matter how hard they tried, my teachers could never manage a seamless roll call with Agnieszka Maksimowska. This silence lead to shame, so I begrudgingly agreed to Agnes. At least Agnes didn't result in an uncomfortable pause. One step closer to being Canadian. Eventually, I started reclaiming my name: from Agnieszka to Agnes to Aggie to Aga, which is a diminutive form of Agnieszka.

Julie Wilson: How do you think the critical voice of Giant would be received in Poland?

Aga Maksimowska: I don’t know. My fear is not well; my dream is wonderfully well. We're all protective of the place we call home no matter how we criticize it ourselves. When someone else criticizes it, especially a defector, we really dislike that. We think, "What the hell do you know? You left! How dare you comment on what you turned your back on?" We may not say this aloud, but we think it.

I don't know whether Polish readers will take to Gosia's view of her homeland, or her mother's for that matter, which is even more critical. They might find it too painful, too raw. They'd probably rather read about foreign lands, alien experiences. There is much escapism in reading literature, isn't there?

Fundamentally, though, I hope Polish readers would recognize the profound love that exists for Poland in Giant. We wholeheartedly criticize only that which we love and long for.

Julie Wilson: You recently contributed a list of child narrators for 49th Shelf. Going into writing Giant, did you feel you had a character who bore unique traits? Or is there a universal voice, a curiosity, that is similar to all young narrators?

Aga Maksimowska: Absolutely! If I didn’t think Gosia was unique I don't think I could have lived with her for those five years of multiple rewrites. And yes, all young narrators have a curiosity and a directness that's infectious. Gosia is unique in that she occupies an adult body, at least to the outside observer, so that people treat her and judge her and expect of her as if she were twice her age. Inside, she's still a little kid. 11-years-old is really young. This dissonance produces a unique voice insofar as Gosia surprises the people she interacts with as much as she surprises the reader. The Polish-French writer Guillaume Apollinaire said that "Art's single greatest potential is . . . surprise." I tried to exploit this potential in Giant.

Aga Maksimowska emigrated from Poland in 1988. She studied Journalism at Ryerson University and Education at the University of Toronto. In 2010, she completed a Master’s of Fine Arts degree in Creative Writing at the University of Guelph. She lives in Toronto with her husband and daughter, where she is teaching high-school English and working on her second novel. Find Aga in the following places: official website | Facebook | Twitter