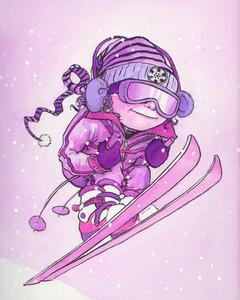 She skied on purple snow

She wore a pair of purple goggles

She slid on purple ice

Then she asked a ski instructor

When it comes to technology,I’m poised somewhere between the let-it-rip exuberance of Mabel’s "yee-haw, here I go," and the knowledge that (for me) slowing down is the only sane way to proceed. A few years ago, I attended a discussion and book signing by scientific journalist Joel Garreau, author of Radical Evolution. In the book, Garreau outlined four possible future scenarios: heaven, hell and prevail. Heaven is the land of perfect: think designer babies. Hell? We implode. A kind of Kaput. Prevail and Transend-- they speak for themselves. We proceed with necessary caution. This is oversimplifying, but Radical Evolution is a book I keep re-reading and recommending to anyone who will listen. Garreau is a superb storyteller who could make complicated science accessible to a labradoodle without dumbing the content down. At some point in the question and answer period Garreau said something I’ll never forget. “I was typing this book as fast as I could to tell everyone to hurry up and slow down.” Yee-haw/ Slow down. 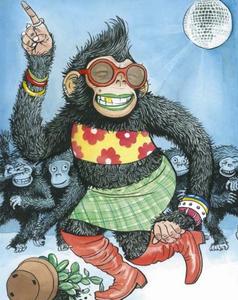 Sydney Smith, from There Were Monkeys...

I started out on a typewriter and used whiteout, now I’m trying to master Dragon Naturally Speaking because speech recognition is more accurate than my two finger typing. That’s radical for me because it wasn’t until an eight-year-old reader asked me what is your email instead of do you have an email, I finally got myself on email.This doesn’t seem so once upon a time or long ago. Last fall, I caved and joined the Facebook and Twitter. Twitter is like being a bumper sticker writer every day. Walkworkwork, tea, twitter twitter, work. I love Twitter. Facebook, not so much. Yes, I did feel like that New Yorker cartoon where the writer wears a sandwich board and I realized once again my name is Sheree Fitch and I am a word addict. I pressed a wrong button last week and now I’m locked in at LinkedIn. Some little micro munchkin who lives inside the computer grabbed my contact list and sent out requests to everyone in there. Email hell, yes, but to have to say, “I don’t really know how LinkedIn works, I pressed the wrong button, please just ignore the message.” Yep. That’s one really cool LinkedIn professional, indeed.

As of this week I’m working on my “apps” not my abs. Apps. I had to ask someone what “apps” stood for. I’m serious. I’m the person who thought “lol” meant lots of love up until almost yesterday and the word blog still reminds me of a bloated frog. Yet again, never say never, because I’m blogging once or twice a week. Is anybody out there, I wonder because it seems like I’m talking in UTTER SPACE, title of a verse novel in progress. It’s about a poet locked inside the Tower of Babble. Not autobiographical in any way.

Last year, I discovered, much to my surprise, that Skype author visits could be amazing. They connect writers to readers —differently than in-class visits, but they do connect us. All I had to do that day was wash my face and brush my teeth before the little underwater bubbly sound rang to tell me I’d connected to class in Calgary. No one knew I was in my bedroom slippers and I was back at my writing desk that afternoon. I’m raring to Skype author visit some more but convenience isn’t everything. I’ll keep going into schools as a visiting author for as long as I’m asked (and as long as there’s funding) whenever I can, even given the fact I’m not quite the willing road warrior I used to be.

Twenty–five years is a long time to be in perpetual motion. The plan right now is in two years I’m going to take a road trip across the country with my husband before I “semi- retire” from doing school visits. We want to do a documentary on teachers, especially those ones I’ve met or have still to meet, those who bring words on the page alive in interesting and different ways. And yes, selfishly, I want to gather some more memories of the up close and personal kind for myself. Why? Travelling into different communities, being face-to-face and cheek-to-cheek, in my experience, can transport/ transform the storyteller as well as the listeners.

It’s the tactile and olfactory experience I’m not getting through the computer screen. The smells-- peanut butter and apple juice breath, the fierce grip of those kneecap hugs, the “ew-who fahted?” shout-out, the spitballs, the unexpected shenanigans and in-the-moment laughter. Magic! I love meandering through the hallways in schools, looking at the artwork, meeting the principal, the “nice” principal, the secretary and sometimes the families of those children. Ask me about those wonderful potluck lunches and family night with kids in pajamas and all of us hugged in the circle of story. 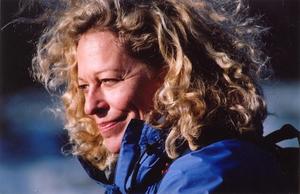 When I do an author visit I feel like I’m inside their world. The world of readers. I’m still grateful they have been inside my worlds-- in the pages of my books. There’s so much that can’t get through the computer screen-- including lice. So Skype’s a good thing too. Maybe poetry says best what I’m trying to explain:

In the Buren in April

one thinks of the word barren

The hills are stubbled with whiskers,

outlined against a ice blue sky

The snow is plastic trying to melt

the grass is dead

the color of nicotine

And the road to the schoolhouse is long

We round the corner and suddenly

there is a live world

staggered on a hill

hugging all these lives within

The ocean, cobalt blue and on and out

as far as I dare look without weeping

I‘ve arrived I think to that spot on the edge

The children and teachers

are awaiting my arrival

the halls are decked with pictures:

The laughter of these children

unspoiled children: ready to ask and touch and hear

As we twist our tongues around syllables

I try to explain to them

that poetry is everywhere

the wash of waves

the crackle of fire

that no it doesn't have to rhyme

but it must always have a beat

and more than that: must feel the taste must smell the here

At noon when they go home

I walk down to the wharf

but more than that, I have an overwhelming

urge to put my finger in the April ocean

to test the temperature of the sea

I sit there looking out

Then I turn to head back ----and there they are:

the children of the morning

streaming down the hill towards me

shifting babies in woolen bonnets from hip to hip

holding the mitten hands of toddlers

they reach me, then beseech me

to do a reading for their siblings right there

on that wharf, right there on the edge of the Atlantic

then they tell me stories of their fathers at sea

tell me of storms, new bikes they want to buy

point out where they live

I leave the village, travel to St. John's

that night I dream in tempera Technicolor

of a poet named Pied Piper

who was carried off by children

to a village by the sea.

-Sheree Fitch, From In This House are Many Women, Goose Lane Editions, 1992.

Sheree Fitch’s first two books, Toes in My Nose (1987) and Sleeping Dragons All Around (1989), launched her career as a poet, rhymster, and a “kind of Canadian female Dr. Seuss.” Fitch has won almost every major award for Canadian children’s literature since then, including the 2000 Vicky Metcalf Award for a Body of Work Inspirational to Canadian Children. She has over twenty-five books to her credit, including her bestselling and critically praised adult novel, Kiss the Joy As It Flies (2008). Her most recent book is the YA novel Pluto's Ghost, and a new edition of her classic There Were Monkeys in My Kitchen is due out this fall. Fitch's home base is the East Coast of Canada.