My desk is awash in receipts. Recently unfolded from the depths of my wallet, they keep sliding out of their designated piles. Four months since I updated my spreadsheet; I've really let things go! I circle the vital information, then enter it on my keyboard. The CD mechanism on the computer grinds, and from the tinny speakers comes a voice: Mona Gould, my grandmother, reading her poetry and telling stories from her life.

Mona is nowhere. She died in 1999 and was cremated, yet now a complex sequence of zeroes and ones brings her voice into my office this early September day. There are other sounds on the CD, the traffic on the highway outside her apartment in Barrie where the tapes were made, the clunk and whir of the original cassette machine, the banter with her friend John Ide, who had the foresight to capture her voice on tape.

A former broadcaster and poet, Mona was eighty-one years old when John undertook that recording session. Later, he transcribed the results for an art installation which allowed her to be heard again after many years of obscurity. Recently, he transferred them to CD, with plans to develop the work further.

This afternoon's combination of activities is no accident: doing my finances and listening to Mona' s voice. Only a spreadsheet could provide enough ballast for the feelings that buffet me at this moment. It's the first time I've heard her voice since her death.

“She caressed you with her voice,” John once said. To me, that voice was commanding. It commanded my attention. And still does. As if no time had passed I cycle through familiar emotions. I giggle as she insists John make her a strong coffee before she’ll read another word. Anger flares as she speaks with scorn of “liberated women.” Then there’s the old sense of claustrophobia. I’m back to being six years old again, sitting with her through yet another night of drunken storytelling. With no choice but to listen.

And then oh! Stunned admiration as I hear her read the poem “NosAglia” from her 1943 book Tasting the Earth. How long had it been since she'd read that poem aloud? Knowing Mona, she did not rehearse before John recorded it. Yet the poem – which may look trite on the page – fairly jumps out of the speakers, vivid, fresh and moving. She read it as if it were prose, occasionally allowing the poetic cadences to peep out from behind her conversational tone. She was quite simply at home in front of a microphone. It was a crime that it all came to an end before she wanted it to.

Occasionally, my pen strays to a piece of paper at the edge of my desk. There's a good one! A poem which sounds clear and can be easily excerpted. John has generously lent me his mp3 files to play at the launch of Outside the Box. It’s my biography of Mona, interspersed with the story of creating an archive for her at the University of Toronto. Later, I'll open his files in a simple editing program, demarcate sections in the wave patterns with my cursor, splice and rearrange them so that Mona can make a gu(o)est appearance at the party.

This is all part of a long process of digitizing Mona. John was in the vanguard with his installation in 1989. Last year I posted Mona’s three books on Project Gutenberg, and this fall, will launch a website with some of her unpublished poetry. Ironically, this is made possible by a technology which Mona hated and feared. She used to call the computer “the infernal machine.” 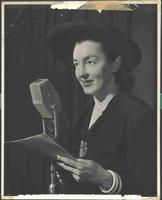 What would she have felt about all this? Probably okay, had she met Greg Astill at the Digital Design Studio of the Toronto Reference Library. These projects all start and end with Greg. He helped John transfer the tapes to CD, and has facilitated every stage of my digitizing work as well. Mona would have liked him, and I think the feeling would have been mutual.

Going to see Greg means crossing the library's downstairs reading room. It bustles with activity: students elbow-deep in homework, ESL tutors exchanging whispered phrases with their charges, seniors keenly studying their novels, passers-by killing an hour before an appointment, and some people with nowhere else to go, taking refuge from the elements among newspapers, books, and a spirit of learning.

Greg sits in his fishbowl of an office, fielding questions.

“Could you scan this tenancy agreement?”

“Can you copy these home-movies for my family in Hong Kong?”

“Where are the washrooms?”

“I want to create a website for my dog-walking business.”

“I want to make three out-of-print books available on the internet.”

Last summer, I handed Greg Mona’s three books along with a photo of her, in the hopes she would work some kind of beyond-the-grave magic on him. It wasn't needed. Greg answered my request -- as he does every other one that comes his way -- with interest and patience. Working with Greg has provided me with another kind of ballast. His practicality dissipates the heaviness that still lingers from my relationship with my grandmother, and it’s refreshing to know this project is one of many he has on the go.

He broke the Gutenberg colossus down into manageable tasks. First we had to scan the pages, then run them through an Optical Character Recognition program. Then we had to convert them to simple text files, and proofread them. These files had to be run through Gutcheck, a program which brings documents into line with Project Gutenberg specifications. (It's available in “regular” and “paranoid” editions.) Now, Tasting the Earth, I Run with the Fox and Gossip are available again, to anyone who wants to read them.

But this was only part of the job. Mona wrote thousands of poems in her ninety-one years, and only a small percentage of them saw publication. Last month, I descended – possibly for the last time – to the basement of the Thomas Fisher Rare Book Library, at the University of Toronto. I transcribed sixty-five unpublished poems from her archive. Then it was over to Greg again; he helped set up a domain name and feed the material into a template.

This feels like the last stage in what has been my task for over twelve years, a stage even beyond creating the archive and writing the book. Mona needed to come out of the basement, out into the world again.

The Mona I grew up with was living in obscurity. I won't go into the reasons – that would be a spoiler for the book – so I'll just say that it had to do with the climate of her times. As a title for one of her numerous unpublished manuscripts, she used a line from Edna St. Vincent Millay's “The Poet and his Book,” (Second April 1921). “Read me, do not let me die!” It was kind of living death, this lack of access to an audience, for her poetry, and her voice.

Mona wanted to have her poetry reproduced free all her life. She also wanted to live from the proceeds of writing it. I'm not sure how she reconciled these two ambitions. Granted, I'm not the best person to ask, given that I log every pack of stamps I buy on a spreadsheet at the end of each month, but I think she just wanted it all to flow, and to get the same sense of plenty from having it received as she got from writing it.

As the site is about to launch, I feel the way I did watching her ashes sweep out over the water the day we scattered them. No sooner was the twist tie off the bag than they flew away. Free. Mona is free of the constraints of reality, now. She's also free of judgements of publishers, of the fashions that determined their decisions, and of the barrier between herself and her readers that tormented her in the final years of her life. And this frees me as well.

Maria Meindl reads from Outside the Box: The Life and Legacy of Mona Gould, the Grandmother I Thought I Knew:

Maria Meindl is the author of Outside the Box: the Life and Legacy of Writer Mona Gould, the Grandmother I Thought I Knew from McGill Queens University Press, a story “The Last Judgment” from Found Press and “Rules” an essay in an anthology on death published by Creative Non Fiction. Her essays have appeared in The Literary Review of Canada, Descant and Musicworks. She has made two radio series for CBC Ideas: Parent Care, and Remembering Polio.