We are honoured that our first Canadian Bookshelf guest post is by none other than Sarah Leavitt, author of the much-celebrated graphic memoir Tangles: A Story About Alzheimer’s, My Mother and Me (Freehand Books). Sarah is an avid reader of graphic novels as well as a breakout star in the genre, and here she reviews three penned by fellow Canadians.

This winter I unintentionally took up the Salon challenge mentioned in the post below: to read outside my comfort zone.

I’d realized how unfamiliar I was with the cartoonists of my own country; all my idols were foreigners: Lynda Barry, Jules Fieffer, Art Spiegelman, Kim Deitch, Marjane Satrapi, David B, Joann Sfar. Recently I’ve been particularly obsessed with Lynda Barry and Aline Kominsky Crumb, along with Mary Fleener and other women from the Twisted Sister collections. These cartoonists’ books are well within my comics comfort zone: stories about weird outsiders, mostly women, told with panels full of scratchy lines and dark drawings, rants and yells and sound effects.

Discovering my Canadian favourites was like leaving a dark, smoky, overheated party and stepping outside into a silent snow-covered night.

It’s not like there aren’t any Canadian parallels to the American women’s comics I was reading. But that’s not what captivated and held me. No, it was books by men about men, books about history, hockey and getting old, books with pages and pages of silent, pensive panels. At first these comics seemed to present a clichéd version of Canadian writing, Canadian men’s writing, and Canadian men, for that matter: stories of hockey, farming, fighting battles in the snow. But underneath the snowy surface of these comics, and not really that far below, I found a complicated, challenging way of looking at the world and of drawing and writing about it. 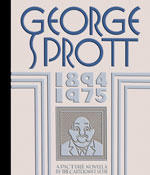 First there was George Sprott 1894–1975, by Seth: the life story of an unremarkable and unsympathetic man who works as a radio broadcaster, studies the Canadian North in an amateurish, romantic sort of way, and lives and dies without great incident. I’ve read lots of comics by Seth and I’ve always been enraptured by his drawings. I’ve wanted to touch the originals and feel the texture of the ink under my fingers, wanted to watch him while he drew, because his hand must move so gracefully and effortlessly over the paper. His drawings are this crazily perfect combination of tight structure and smooth flow. But his stories never moved me; they always seemed so dry and cold.

Then I read George Sprott and realized I’d been too impatient to see the depth in Seth’s work. Just the size of the book forced me to read the story as slowly as it needed to be read (it’s 12” x 14,” similar to an atlas). When the slowness of my reading matched the slowness of the story, I was able to step into the story and notice the other ways in which Seth slows the reader’s pace. For one thing, each page is so delectably polished that you need to pause and take it in as a whole before you start going through it panel by panel. He can go for many panels without using any dialogue or narration. Even if your eyes move over these panels quickly, the lack of text somehow gives the impression that much time has gone by, time spent in deep silence. All of this is a perfect context for George’s slow, small life, his obsession with the past, his resistance to moving forward, his inevitable irrelevance. Through the life of this one man, we follow Seth into deep and disturbing meditations on mortality, death, and the value of each individual’s short life.

Essex County, by Jeff Lemire, is another quiet book, a collection of three connected stories about lonely, heartbroken people in rural Ontario. Lemire’s drawings are raw constructions of thin, scratchy lines and splashes of deep black—so expert that you know he spent years perfecting that looseness. Where Seth’s style is like a gentle drawing in, Lemire’s is more like a quick strong push. You open the book and you’re forced into the painfully solitary world of Lester, the skinny little orphan in the mask and cape he never takes off. Lester daydreams about flying, and you fly with him, until his equally thin and lonely uncle calls you back to feed the chickens.

Lester and his uncle eat dinner in silence, and their occasional awkward words make the silence louder and more painful. But it’s not just the lack of dialogue, it’s the way Lemire draws all his characters—their gaunt and weathered faces with the small eyes and square noses, the big blunt fingers. You can’t look away from the pain and loneliness in their faces and bodies. In the second section of the book, Ghost Stories, we follow Vincent Lebeuf as he spends his last days in his own house before moving to a nursing home. He looks back on the betrayal, secrecy, and silence that led to a lifetime of grief. As he ages, his hair thins and his face gets more and more gaunt, stripped down to the most essential lines, just like the story. At one point Vincent looks right at you and says, “It wasn’t always like this, was it?” Like Seth, Lemire takes us all the way to Vincent’s death, and it’s pointless to resist.

I tried and failed to finish Louis Riel many times over the past few years. I got impatient with Chester Brown just as I had with his friend and colleague Seth. I found it difficult to stick with the pages and pages of tiny, precise drawings of small men in large expanses of snow, the drawn-out stories of political negotiations and the slow, inevitable suppression of Riel’s rebellion.

But this winter, when I decided that I had to finish it, something shifted. I gave in to the slow, careful pace of the story and, as I had with George Sprott, felt myself irresistibly pulled outside into the cold and spirit-breaking world that shaped Louis Riel. Once you’ve committed to this world, Brown surprises you with small, terrifying moments like the execution of Thomas Scott. Scott is a repellent violent racist, but when Brown simply does not translate the French of the firing squad commander after translating all the other French dialogue, we feel Scott’s helplessness, and the blank white panel that marks his death is a perfect absence of information. Further on, with similar restraint, Brown firmly leads us into Riel’s dark cell in a psychiatric hospital so we can experience his desperation as he tries to explain that he is not insane, that God has spoken to him.

Silent, sad, snow-covered, and so Canadian. I found all of these books difficult, but it was so totally worth the discomfort.