The Chat with Sheree Fitch

In the immediate aftermath of last year’s tragedy in Portapique, Nova Scotia, Sheree Fitch penned a verse that captured the heartache so many were feeling. Originally broadcast in a national vigil to honour victims of the tragedy, Sheree’s poem Because We Love, We Cry was recently released in book format by Nimbus Publishing.

Sheree Fitch’s first two books, Toes in My Nose (1987) and Sleeping Dragons All Around (1989), launched her career as a poet, rhymster, and a “kind of Canadian female Dr. Seuss.” Fitch has won almost every major award for Canadian children’s literature since then, including the 2000 Vicky Metcalf Award for a Body of Work Inspirational to Canadian Children. She has over twenty-five books to her credit, including her bestselling and critically praised adult novel, Kiss the Joy As It Flies (2008).

Trevor Corkum: Because We Love, We Cry was written as a response to the tragedy in Portapique and surrounding areas last year. How did the poem come to life for you?

Sheree Fitch: That Sunday, as things unfolded, we were franti … 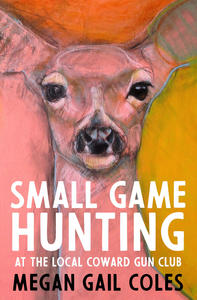 Small Game Hunting at the Local Coward Gun Club, by Megan Gail Coles, begins with a warning: "This might hurt a little. Be Brave." But oh, the rewards for the reader who dares to venture forth: Coles' fresh and vibrant storytelling is stirring and unforgettable, and this novel that's set over the course of a single day proves to be so much more expansive in terms of time and place. It's a literary tour de force, and one of the most powerful books you'll read this season.

The books on this list challenge literary expectations and community norms while demanding artistic honesty and human compassion. This is fiction, nonfiction, poetry and drama from the whole of our country written by individuals taking creative risks. Some of these are small linguistic risks, forcing the structure of a sentence into a new shape. Others are grand demonstrative risks, urging the industry to move beyond traditional gatekeeping. Still others are risking more, risking everything, even safety and wellbeing, to speak their truth rather than sit silent and unseen. These books, to varying degrees, have given me courage to write as I do about things I feel are important to the place and people I love. I am …