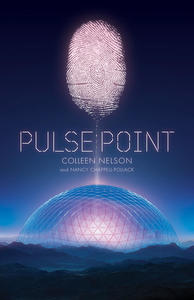 Award-winner Colleen Nelson's latest is the YA novel Pulse Point, written with Nancy Chappell-Pollack. In her list, Nelson shares other Canadian dystopian titles that inspired her.

Pulse Point is my first attempt at any genre other than realistic fiction. Writing about an alternate world proved to be more difficult in some ways than writing about the one we actually live in, but it also stretched my creativity and posed a lot of questions about the way we do things and why.

Pulse Point takes a "cli-sci" approach to dystopia. In the book, climate change has made our world uninhabitable so people deemed genetically desirable are allowed to live in Cities, self-sustaining domed structures. My favourite part of reading dystopian books is learning the many versions of our world that authors create.

Narrated by an illiterate main character as she sets out to reunite her family, this book had me hooked after the first page. The dystopian world in Blood Red Road is brutal and harsh, but the tenderness between the characters …