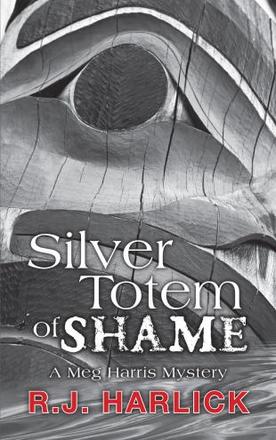 R.J. Harlick's Meg Harris was included on our Canadian Sleuth Lit Wish List in December, an amateur sleuth "who drinks a little too much and is afraid of the dark." She appears most recently in Harlick's latest novel, Silver Totem of Shame, in which Meg encounters the crime scene of a murdered Haida carver while on a visit to Vancouver and begins a journey up the coast to the islands of the Haida Gwaii in search of the murdered boy's family and his killer.

While she's not cooking up new plot twists, Harlick fulfils her duties as President of Crime Writers of Canada. In this guest post, she offers a coast-to-coast perspective on the Canadian crime writing scene.

These are exciting times for Canadian crime writing. With books by Canadian writers appearing more and more frequently on both national and international bestseller lists or as finalists and winners of national and international book awards, I feel we have finally arrived. It is hard to believe that 30 years ago, when Crime Writers of Canada was established, there were only a handful of authors writing distinctly Canadian mysteries. Today there are well over 250. I like to think we Canadians are the next wave to take the mystery reading world by storm.

With so many fabulous recent releases, it is diffi …