The Chat with Jessica Westhead 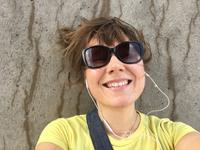 Jessica Westhead’s work is well known to fans across Canada. She returns to The Chat this month to talk about latest novel, the psychological thriller Worry.

Taking place over 48 hours in remote cottage country, it explores the complex relationship between best friends Ruth and Stef.

Quill & Quire says “Westhead is a concise wordsmith; Worry is a quick and engrossing read."

Jessica Westhead’s fiction has been shortlisted for the CBC Literary Awards, selected for the Journey Prize anthology, and nominated for a National Magazine Award. Her short stories have appeared in major literary journals in Canada, the US and the UK, including Hazlitt, Maisonneuve, Indiana Review and Hamish Hamilton’s Five Dials. She is the author of the novel Pulpy & Midge and the critically acclaimed short story collections Things Not to Do and And Also Sharks, which was a Globe and Mail Top 100 Book, a Kobo’s Best eBook of the Year and a finalist for the Danuta Gleed Literary Award. Westhead is a creative writing instructor at the Chang School of Continuing Education at Ryerson University.

Trevor Corkum: Worry is such a fraught novel, tense in so many ways. What made you want to write this kind of psychological thriller? In what ways would you say this is a

There are 20 mysteries here, and every one of them has great reviews. We have the utmost confidence that some of you can make your way through at least half of them by the end of June. Or sooner?

Mystery Minute is a new 49th Shelf series that will run four times a year in the spring, summer, fall, and winter.

Charlie Tate and Elodie Gray make a striking couple. Charlie is a shaven-headed weightlifter who has worked as a seaman, carnival huckster and hustler and now earns his keep as an unlicensed private investigator specializing in extricating clients’ money from thieves. Elodie Gray comes from money—lots of money. An accident when she was a teen confined her to a wheelchair, so she does the inside work—using her computer knowledge to find people who want to remain hidden.

In The Finger’s Twist, Charles and Elodie are hired to investigate a bombing attempt at the Ontario legislature, purportedly committed by an anarchist group called The Black Bloc. While the city drops into paranoia fuelled by the police and the mayor, Charlie and Elodie try to keep the black sheep daughter of a prominent family from a certain prison sentence.