One Hundred Years of Struggle: The History of Women and the Vote in Canada 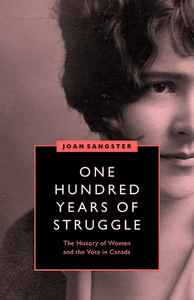 One Hundred Years of Struggle: The History of Women and the Vote in Canada, by Joan Sangster, looks beyond the shiny rhetoric of anniversary celebrations and Heritage Minutes to show that the struggle for women's equality included gains and losses, inclusions and exclusions, depending on a woman’s race, class, and location in the nation. This excerpt from "Chapter 6: Feminist Countercultures," explores the roles of satirical theatre and print media in the Canadian suffrage movement.

Torontonians packed the pagoda pavilion at Allen Gardens in February 1896 to witness a major social and intellectual happening: a Woman’s Mock Parliament. Well-heeled attendees had secured tickets ahead of time to hear the latest arguments on this avant-garde issue. After some dignified classical music and an earnest statement of support by the Men’s Enfranchisement Association, the feature attraction unfolded: suffragists’ collectively written, dramatic rendition of a typical day in Ontario’s female-dominated legislature. No less than fifty-two amateur actresses filed onto the stage to portray members of the legislature, though in skirts not suits.

The play began with the usual parliamentary practice of question period. Why, one legislator demanded, would the governmen …